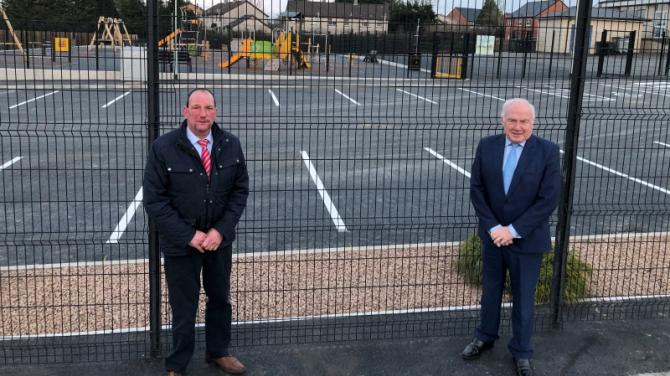 A CUSHER Alderman has called for Armagh City, Banbridge and Craigavon Borough Council to take a common sense approach following concerns about a dangerous exit from a play facility in Markethill, writes Adam Morton.

Speaking at a meeting of council’s leisure and community services committee, Alderman Jim Speers said he had been contacted by several people expressing concern about the safety of the exit of the new play facilities and MUGA beside Markethill Primary School.

“I want to express some concern about the exit at the new play facilities beside Markethill Primary School,” said Alderman Speers.

“I have been contacted by several people who have expressed concern that when leaving the site there is a very restricted view of the road because of a wall in place at the front of the school.

“That, I have been told, is forcing them to edge out on to the footpath to get a better view of traffic.

“There is a one-way system operating on the site and, while this exit is perhaps restricted somewhat by this wall, the entrance has no such limitation. It is beside a mesh fence that can be seen through.

“Is there any way whereby the entrance and the way out can be changed? The point made to me was that it was dangerous coming out of that exit, when it would probably be safer to be able to leave via what is, at present, the entrance.”

He continued: “Would someone have a look at this issue please?

“It may well need to be discussed with Markethill Primary School but I don’t think it will be an impossible problem to solve.

“And I want to make the point that this is in no way a criticism of these fantastic facilities or anyone involved with them.

“A concern has been raised with me and I am asking officers to explore the possible ways to address this problem.”

One of council’s strategic directors, Mark Parkinson confirmed the matter would be investigated as requested.