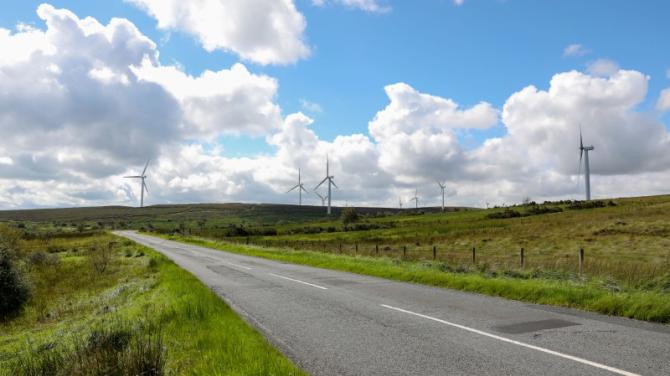 ULSTER Farmers’ Union (UFU) members will play a central role if a proposed target to generate at least 70 percent of Northern Ireland’s (NI) electricity from renewable sources by 2030 is to be achieved.

That was the message from the electricity transmission system operator SONI, during a recent presentation to the UFU’s rural enterprise committee which took place on 6 May.

The meeting focused on ‘Shaping Our Electricity Future’, a major public consultation being carried out by SONI, which looks at how the transmission power grid can be developed to handle more renewable electricity.

The consultation contains four potential approaches to upgrading the transmission system to ensure the new renewable electricity target, which is due to be published by the Department for the Economy later this year, can be met.

Achieving this target will involve fundamental changes to the grid and depending on the outcome of the consultation, could result in up to twenty new, large-scale grid development projects to transfer renewable electricity from the north and west to the east, where there is most demand.

The four potential approaches to improving the grid set out in the consultation are as follows:

1.Generation-Led: Government policy would influence where renewable energy is generated – favouring locations where the grid is already strong

2.Developer-Led: In this approach, SONI continue to connect new sources of renewable electricity as requested in any location

3.Technology-Led: This approach uses technical solutions to make the grid more resilient so it can better handle the variable nature of renewable energy

UFU members are being encouraged by SONI to have their say on how they believe the grid should be developed. The consultation closes on 14 June 2021 and SONI intends to publish its report and proposed outcomes – which could involve elements of all four potential approaches - in the Autumn.

John Watt, chair of the UFU’s rural enterprise committee said, “The UFU would like to thank SONI for taking the time to meet with our rural enterprise committee yesterday afternoon (6 May), and for acknowledging the role played by the land-based sector in meeting previous renewable electricity targets. We now generate enough clean electricity to power almost 150,000 homes and businesses across Northern Ireland.

“Looking ahead, SONI’s endorsement of our key role in meeting future targets, is very much appreciated. There are still energy policy and technical challenges which will need to be addressed but this engagement will go a long way to meeting these barriers head-on.”

SONI managing director Alan Campbell added, “On behalf of SONI, I would like to thank the UFU’s rural enterprise committee for taking the time to discuss the ‘Shaping Our Electricity Future’ consultation.

“The report sets out the most significant changes ever undertaken to the transmission system, which will involve new infrastructure required to connect more renewables.

“Farmers and landowners have played a central role in Northern Ireland’s renewable energy success so far, and these changes to the grid cannot happen without their input and involvement.

“We look forward to working closely with the UFU and its members in the time ahead to help deliver for 2030 and beyond.”

More information about the public consultation and how to respond can be found online at https://consult.soni.ltd.uk.