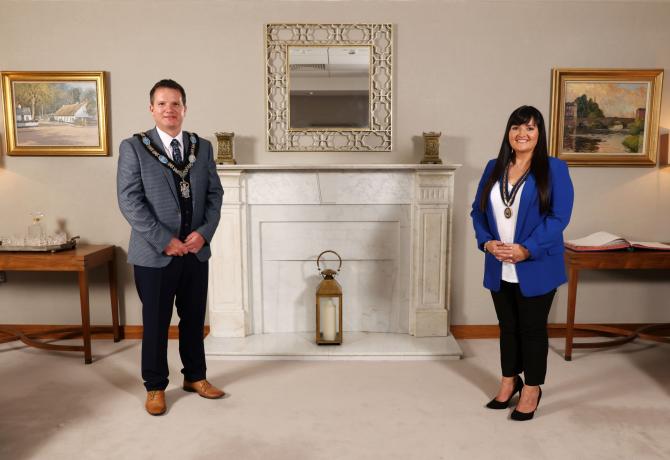 Political representatives from across Armagh City, Banbridge and Craigavon Borough Council have welcomed the borough’s new Lord Mayor and Deputy Lord Mayor to their roles.

Nominating Alderman Barr for the role of Lord Mayor, UUP group leader, Alderman Jim Speers, described him as “a strong advocate for the community, business and voluntary sectors”.

“It is such a great opportunity to represent the Borough and I hope that in the incoming 12 months the restrictions are relaxed a bit so you can enjoy it in the way others have in the past,” said Cllr Baxter.

“I have no doubt you will be a real advocate for your charities and the armed forces. I also have no doubt with the strength of the staff behind you in the Lord Mayor’s office, you will have some great events throughout the 12 months.”

Sinn Fein group leader, Councillor Liam Mackle wished Alderman Barr well for his year in the office noting he has a “massive challenge ahead”.

“The borough will be moving beyond the pandemic and will hopefully emerge bigger and better,” said Cllr Mackle.

“I have no doubt you will be ably support by the Deputy Lord Mayor and will be a first citizen for all the borough so congratulations on your appointment.”

“As someone who has filled the role of first citizen it is a great honour to represent all our community in that office,” said Cllr O’Hanlon.

“Good luck in the year ahead and we wish you well.”

“I wish you every success and am looking forward to working with you on the many challenges ahead,” said Cllr Pope.

Councillor Paul Berry also wished Alderman Barr all the best for the year ahead.

“It will be a challenging year but I do believe you are up for that challenge and are fit to provide the leadership that will be required in the upcoming year,” he said.

His party’s group leader, Cllr Liam Mackle described Cllr Donnelly as a people person and said he had “no doubt” she would be a massive support to the new Lord Mayor.

“Cllr Donnelly is very much a people person and I have no doubt that in her role as Deputy Lord Mayor she will resonate with all the citizens of the borough,” he said.

DUP group leader, Councillor Mark Baxter wished the new Deputy Lord Mayor well and expressed his hope that she will be able to go out into the community in her new role.

UUP group leader, Alderman Jim Speers congratulated the Deputy Lord Mayor on her appointment and urged the chamber to move forward with the “spirit of generosity”.

SDLP group leader, Councillor Thomas O’Hanlon wished her well in the year ahead.

“It is a great night for you and your family and I want to wish you well,” he said.

Alliance Party councillor Brian Pope wished Cllr Donnelly well for the year ahead and said is he looking forward to working with her in her new role.

“I also want to wish the Deputy Lord Mayor all the best in the year ahead,” said Cllr Berry.

“There will be many challenges both you and the Lord Mayor will face but I believe it is important that you face them together in unity.

“A good progressive team will help move our communities forward and help with our economic development and I want to wish you, Deputy Lord Mayor, all the very best in your year in office”.