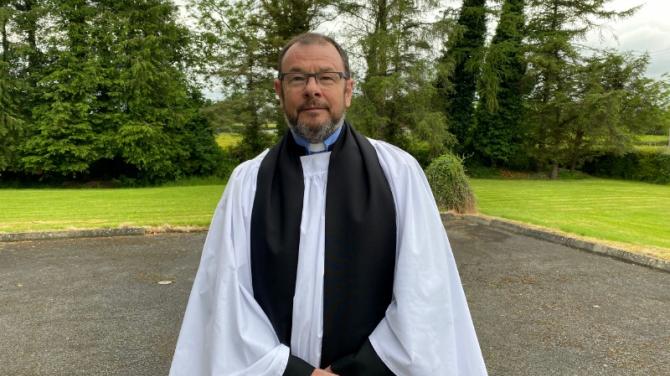 It was conducted by the Archbishop of Armagh John McDowell.

Although continuing pandemic restrictions meant a sizeable reduction of the numbers able to attend, those present included the Select Vestries of both churches, invited clergy and a limited number of family members and close friends.

His path into full-time ministry is an interesting one because the Portadown native previously had a distingusihed career in journalism and public relations.

Some of his Dobbin-Kilmore parishioners may remember the name of their new rector having appeared as a by-line in the then-Morton Newspapers Group-owned Portadown Times where he learned his trade under the esteemed tutelage of David Armstrong.

In due course the new rector became editor of the Cookstown-based Mid-Ulster Mail and then was awarded the editorship of the highly-respcted Ulster Business magazine.

After 13 years in journalism, the year 2000 saw him switch to public relations and communications. He spent the next 15 years in that challenging environment.

However, such was his faith that whilst working in that field, simultaneously he undertook a three-year part-time training course with a view to non-stipendiary ministry.

“For 10 weekends of the year that meant leaving work at six o'clock on Friday night and driving to Dublin where it was then straight into a class until 9pm – after which you basically collapsed, exhausted!

“And then we spent the rest of the weekend learning, before starting back to resume our regular jobs on Monday morning. It was tough, but it was also great fun, so I loved it.”

When he was ordained 14 years ago he the joined Shankill Parish Church team in Lurgan where he served as a non-stipend. At the time the curates there were Rev William Orr – now rector of St Mark's, Portadown – and Rev Craig Cooney, of Hope Church in Central Craigavon.

It was a part-time role, of course, undertaken in tandem with his work in communications.

“With over 900 families, Shankill was a huge parish which is why there were three of us as well as the rector,” Rev Baxter recalled.

His next post was Maghaberry where he was served as Minister in Charge of the Church on the Hill, a joint-Church of Ireland/Methodist venture under their covenant relationship which allows churches to join together in a situation where certain conditions pertain and are met.

“I couldn't be called rector because I wasn't full-time, nor was there a rectory,” he smiled. “We brought two congregations together under one roof and developed a thriving community over a period of seven years,” is how he described that experience.

Still working in PR and communications, he returned to Shankill Parish for a short second term before finally going into full-time ministry at nearby Magheralin/Dollingstown four years ago.

Reflecting on his journey up to this point he explained, “Although it has been a bit of a circuitous route, the feeling of a call has always been there. But the Lord always said, 'No, there's more I want you to see and experience first'.

“So, I've travelled a fair bit of the world and I've worked as a journalist, which was fantastic because it's a role that teaches you so much.”

Asked what his vision in his new role is, he replied, “Essentially I want people to grow and to full maturity as disciples of Jesus Christ.

“We'll do that through studying scripture, through prayer, through common and corporate worship, obviously, but also by looking outwards and reaching outwards others.

“I also look forward to working with some others because we have some great churches in this area; I love the whole idea of collegiate working.

“But first, I want to listen to people here and show them due respect rather than simply landing and start to dictate; that's not really what it's about - it has to be done together and that is what we will do.

“The few I have met so far have been lovely, Godly people, so I look forward to meeting and getting to know them and others.”

The new rector's wife is Jane. They have been married for 30 years and have two daughters Emma and Rebecca – both of whom live and work in England – and a son, Peter, who, having just finished his university course, is living with his parents in the Dobbin rectory which the rector described as being “beautiful and a wonderful surprise to us to discover just how lovely it is, albeit that we're still surrounded by boxes at this stage."