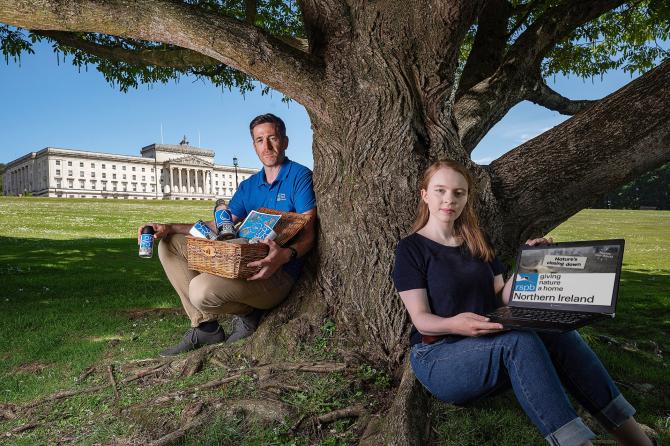 Today RSPB NI, as part of the leading charity’s Revive Our World campaign, has launched an online pop-up store with a difference, taking members of the public on a unique shopping journey.

In an attempt to showcase the significance of what the world would look like without the beautiful nature surrounding us, the conservation charity has created ‘The InConvenience Store’, a free online shop, which shows a future in which nature has collapsed, our skies have fallen silent and entire cities have disappeared under rising sea levels.

Stocking everyday essentials such as sandbags and fresh air canisters, The InConvenience Store paints a bleak picture of what our world would look like without nature and the essential services it provides. This includes clean air and drinking water, flood defences, productive soils to grow food, and a home for wildlife.

Other items include insect protein, representing an alternative protein source due to the scarcity of meat, a birdsong vinyl to recreate the lost treasure of live birdsong and locally grown fruit, symbolising luxury due to the extinction of pollinators which saw prices of fresh food rocket as human pollinators have had to step in.

Organisers say that the campaign’s message is not one of doom but an opportunity for people across Northern Ireland to make a statement.

As a region without its own climate laws and one that is languishing in 229th place out of 240 countries for the amount of nature it has left, the charity is calling on the public to visit The ‘InConvenience’ Store and send a free basket of products to political leaders in Northern Ireland to demonstrate that now is the time to take action and forge a better future.

John Martin, Head of Policy and Advocacy at RSPB NI, commented, “Without nature, instead of fresh vegetables, meat and dairy, honey and fruit, supermarket essentials will include cans of breathable air, precious bottles of unpolluted drinking water and sandbags to protect our homes from constant flooding.

“The InConvenience Store is really a stunt designed to get people in Northern Ireland to think about just how crucial it is to care for the environment in which we live. We need everyone’s help to spread the word and are encouraging the public to visit the store and send a free basket to Northern Ireland’s leaders.

“This will show that many of us do not want this future for Northern Ireland and that we want them to match their words with action by committing to targets in law to save nature at every level of government, delivering against their New Decade New Approach commitments and demonstrating that Northern Ireland can be bold and ambitious in securing a climate-safe and nature rich future.”

This year, action for nature and climate is more critical than ever. World leaders will negotiate last-resort targets to address the dual emergencies at two global events taking place in autumn - the Convention on Biological Diversity (CBD) and the UN Climate Change Conference of the Parties (COP26).

Since the UK is hosting COP26, the decisions and policies will set the bar for the rest of the world, and nature has a key role to play in this. RSPB in England, Scotland and Wales are taking similar action, including a pop-up shop in Manchester, to call for action on a national and devolved level.

Beccy Speight, chief executive of the RSPB expanded: “The nature and climate emergency is not a terrifying but distant disaster our grandchildren will have to deal with. More than 50 per cent of our wildlife is in decline and extreme weather is putting our homes and our health at risk now.

“Nature, if we invest in it, could be one of our greatest weapons against climate change. Our coastlands, woodlands and peatlands are more than just beautiful landscapes - a hidden power lies beneath. These nature habitats lock in huge amounts of carbon, provide homes for endangered wildlife and protect our homes from extreme weather. Our governments must change the course of the future and unleash nature’s potential, before it’s too late.”

Analysis from RSPB of five case studies throughout the UK could produce £6.4 billion a year in carbon storage, air quality and recreational benefit, however there is many more landscapes that this could applied to.

In Northern Ireland, a RSPB NI report recently showed that there would be nearly £50 million worth of benefits if the whole of the peatland in Garron Plateau in the Antrim Hills was restored by 2045, which would outweigh the cost of delivering the restoration at a scale of nearly 1:4. Much of this value comes from carbon storage and sequestration, highlighting the vital role that peatland restoration can play in meeting ambitious climate targets, as well as services to flood prevention, climate change adaptation, and significant biodiversity and employment benefits.

Take action and visit the online pop-up store to purchase your free items now to send to our political leaders to highlight how we need to act now to #ReviveOurWorld: https://www.rspb.org.uk/reviveourworld.