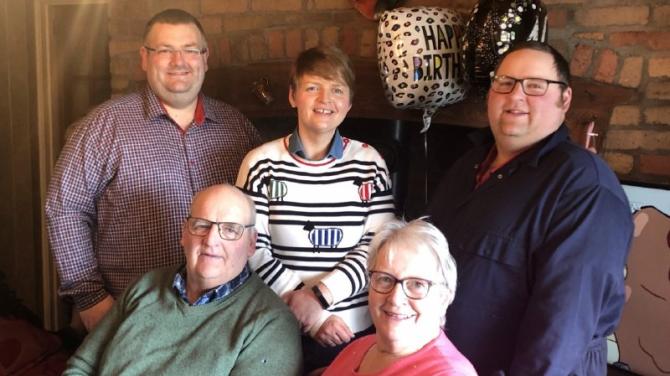 THE late Alexander Nicholl, who died last May at the age of 73, is remembered in the Armagh area as having been a good dairy farmer.

In addition, he, his brother and cousin set up NC Engineering (Hamiltonsbawn) Ltd.

And with next month being the first anniversary of his death from cancer, his daughter Diane is organising two fund-raising events in the hope of being able to help the work of Marie Curie.

Speaking to the Gazette about her hopes she explained whaat is being called ‘The Dandert fopr Alexander’ by saying, “Last year I signed up for the ‘McMillan Mighty Hike’ along the North Coast.

“At the time none us knew daddy was unwell. From he was diagnosed as having cancer until we laid him to rest was only 10 weeks, so he was taken very quickly.”

Diane continued, “Because I enjoy a challenge and in particular love walking, signing up for that walk had just seemed like the right thing to do. So I and several other girls had decided we’d do it.

“As things worked out, the official hike ended up being cancelled because of Covid, though a lot of people – my friends included - went up to the North Coast and did it anyway.

“But I wasn’t able to join them because that was literally days before daddy died.”

She did walk the appropriate distance in the Omagh area where she now lives. As a result, she managed to raise £2,500 for McMillan Nurses.

Diane continued, “McMillan were there at the start of daddy’s illness, but it was Marie Curie who were there at the end when we really needed them. We were so appreciative of the work they did that I thought it would be nice to give something back to them at this stage. That’s what this is about and the timing is appropriate for a few reasons, too.”

All of the money raised will be donated to Marie Curie Nursing Care. Then explaining the thinking behind the choice if venue, Diane said, “The Mournes are beautiful and Simon Pollock, who is a good friend as well as being a primary school teacher in Armagh, also is an experienced hill walker. He knows the Mournes well, so he’s planning the route for us.

“We'll be doing the walk on Saturday, May 21,” Diane said. “That’s a week after what would have been daddy’s 74th birthday, which is why we chose that date.”

Two weeks before that Mourne challenge, however, there is to be a coffee morning in Hamiltonsbawn Orange Hall. Saturday, May 7, is the date of the open-to-all event which is scheduled to run from 10am until 1pm.

“At this stage there’s somewhere in the region of a dozen to 15 who will be going to the Mournes,” said mum-of-two Diane who is Head of Science at Castlederg High School.

Asked if she had a target figure in mind she replied, “No, it’s just about raising as much as we can. Any donation, large or small, will be greatly appreciated. I’ve opened a ‘Just Giving’ page, so if anybody wants to donate they can do so using that.”

The Nicholls are a close-knit family now headed by their widowed mother, Mary. As well as Diane there are two brothers, Robert and Graham.

Graham lives on the family farm where he continues in his late father’s bootprints as a dairy farmer. Robert is a director of NC Engineering, the company his father helped to set up. He lives in Hamiltonsbawn and he is planning a barbecue for all of those who undertake the Mourne walk on May 21.

Expanding on what exactly that day is expected to entail, Diane said, “It’s not a race, so it isn’t meant to be competitive. There’s no pressure on anybody. We’ll just see how people feel on the day and take it from there.

“It’s a bit of craic as much as anything – just a day when we’ll try to do our best and see what we’re able to raise. The youngest walker looks like being a 13-year-old and the oldest is close to 70.

“Simon has planned an easier route, plus a more difficult one for one or two of the fitter, more ambitious walkers. We’ll all go the same route initially and then those who want to go further and summit Donard or go along the Hare’s Gap will be able to
do that.

“Alternatively they can turn off and make their way back, or keep going. It'll be up to each individual.”

Nor are the coffee morning and/or Mournes trek Diane’s only fund-raising initiatives. At the start of March she bought tete-a-tete daffodils and went on to sell 70 pots of those.

“That has gone into the kitty, too, so we’re all trying to do our bit to raise what we can,” she said. “Hopefully the coffee morning will be well supported and the Mourne hike will raise a bit more on top of that. It all helps and it's all going into the one pot.”

On Friday Diane and two others who will be heading to the Mournes on May 21 put in some pre-event training in Gortin. On Sunday she accompanied route-planner Simon on a suss-it-out dry run in the famous mountains which, a la Percy French “sweep down to the sea”.

Her late father clearly was a man of whom she thought the world, witness her final comment as our conversation came to a close.

“Daddy was a busy man, involved in so many organisations,” she reflected. “He was always very active, still farming every day up until he was diagnosed as having cancer. His funeral was just 10 weeks after that.

“But in those weeks he received first-class care from Marie Curie Nurses, so it's for them – and as a mark of respect to daddy – that we're doing this.”

Anyone wishing to donate can do so via www.justgiving.com/fundraising/Diane-Moore7 Or through PayPal at: dmoore2403@gmail.com