Potholes continue to cause misery 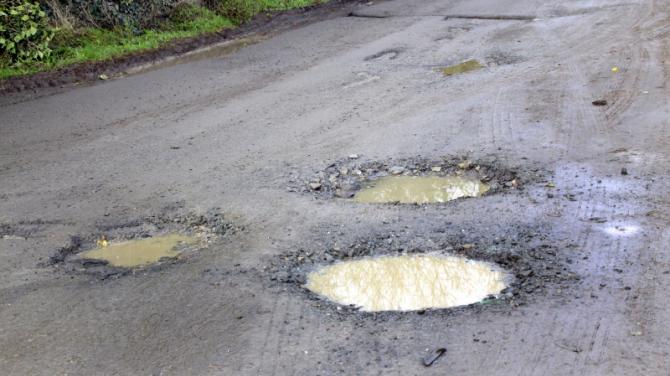 SCORES of potholes along a rural County Armagh road have still not been repaired months after being brought to the attention of Roads officials.

In January, the Ulster Gazette revealed how a number of potholes and damaged surfaces along the Doohat Road in Derrynoose, were turning daily commutes into a nightmare for residents and one business owner.

At the time, a spokesperson for the Department for Infrastructure said officials had visited the Doohat Road and confirmed their intention to “complete an ad hoc inspection and issue all recordable defects for repair in line with current maintenance standards”.

But now three months after the Department for Infrastructure visited the site, the road has still not been repaired and the potholes continue to cause a daily misery.

One Derrynoose businesswoman had previously revealed how some of her staff had even missed business flights at the airport as a result of having their vehicles damaged.

With some of the potholes four or five inches deep, Assumpta McNally – whose family have operated A&M Commercials on the road for over 30 years – had hoped repairs could be carried out.

Speaking earlier this year, Mrs McNally revealed how she had phoned the Department for Infrastructure on numerous occasions over the past year-and-a-half in relation to the condition of the road.

“There are 15 staff working in the yard and they all have to travel over that every day as well. The road should not be in this condition.

“Staff have missed flights to England on numerous occasions, because of punctures in their wheels and car damages, they are also often late for appointments.

“Invoices submitted for damaged rims and damage to cars have all been rejected.

“It’s affecting our daily livelihood; and other people travelling along the road. We can’t keep our vehicles from being damaged.

“It’s impacting a lot of people and it is causing issues, as we can’t even maintain our vehicles because of the condition of the road.

“We have been constantly complaining and they (Department) are doing other side roads, which have little to no traffic on them, yet our road has a business on it and it has just got undriveable.

“We were promised that the road would be done; they did come out and they marked the potholes and put a bit of yellow paint on it and that was it. They didn’t even fill in anything.

“There has to be something done before there is a major incident,” Mrs McNally said.

A spokesperson for the Department for Infrastructure told the Gazette: “The Department routinely inspects roads and any defects identified which meet current intervention levels are prioritised for repair in accordance with the Department’s current road maintenance standards.

“The Department will be carrying out the next inspection of this road next month and defects identified will be programmed for repair.”