Armagh will benefit as kids are taught life-saving skills 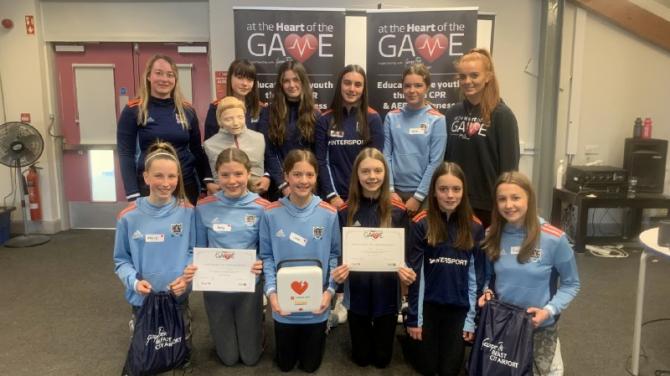 Anna Pim, herself just 17, has entitled her project ‘At the Heart of the Game’.

Despite the fact that the Methodist College Lower Sixth year student is studying for her AS-Level exams, the Pegasus Hockey Club player – who is also an Ulster Hockey Youth Forum member – has undertaken to visit 20 hockey clubs in order to teach them how to use a defibrillator in a medical emergency or administer cardiopulmonary resuscitation (CPR)..

Speaking to the Gazette following Wednesday's 90-minute session with a 10-strong group of Armagh Hockey Club 13-year-olds, Anna explained the origins of her project, she said, “I used to row and one day, just before a race on the River Lagan, a fellow-rower of mine had a cardiac arrest.

“I was 13 at the time and while I wasn't there at the scene to witness it, thankfully another fellow-rower gave him CPR on-site and he recovered.

“When I heard about what had happened, obviously that had quite an impact on me. And I just thought, ‘If I, as a 13-year-old, had been in that situation, would I have been able to cope and would I have known what to do to save my friend?’

“It was during lockdown, having had time to think about it, that I decided, ‘Okay, let’s do something about this.’ That’s how ‘At the Heart of the Game’ came into being.”

Her schedule is relentless, for as well as playing hockey for MCB and Pegasus, serving on the Ulster Hockey Youth Forum and studying for her AS-Level exams, she is a St John Ambulance cadet.

Not that there is much likelihood of boredom setting in, for on Wednesday, having already been to Armagh, she was heading to the North Coast that night to play for Pegasus against Portstewart.

Armagh was her 13th port of call, Banbridge, Portadown, Mossley, Owls, Ballymoney, Coleraine, Lisnagarvey, Belfast Harlequins, CI, North Down, Instonians and Ballynahich hockey clubs having been the others.

Next on her list? Priory (Derry/Londonderry), Omagh and Cookstown – all west of the Bann. Call it regional planning.

That will leave four more to be visited and she hopes to have completed the list by June, “just after my exams have finished”.

Her crusade doesn’t end there, however, for as she told the Gazette, “After that I want to roll it out to other sports for the longevity of the project.

“I've got a busy scheduled, so I can’t really go round 20 rugby clubs or 20 football clubs or whatever, so it's reall just about passing this project on to others and hopefully raising awareness.”

While the main focus in what she imparts is on correct usage of cardiopulmonary resuscitation (CPR) and automated external defibrillator (AED), her sessions begin with two other vital procedures - primary assessment of the casualty and recovery position.

“The response to ‘At the Heart of the Game’ has been wonderful,” Anna said. “All of the clubs I've contacted have been really enthusiastic. Some have asked can I take a group of 20, I’m afraid 10 children is all I can manage because each session requires loads of resources.

“Armagh was fantastic today – really good,” she enthused before adding, “The preparation ahead of each visit is the really time-consuming part, so it’s great that when you get to wherever you're going, you're met with a really warm, supportive response.”

Proof of the high-profile support Anna’s project is enjoying can be seen in the fact that it has two famous ambassadors, namely former Olympic gold medal-winner Mary Peters and Irish international hockey legend Shirley McKay.

St John Ambulance and Ulster Hockey also are enthusiastic advocates of ‘At the Heart of the Game’. And right at the outset, Belfast City (George Best) Airport chipped in with some cash in recognition of the fact that Anna's work is raising much-needed funding that enables AED trainers to assist St John Ambulance Divisions throughout Northern Ireland.

“I really appreciate all these people’s help and support, and of the response of all the clubs which, like Armagh today, saw it as an opportunity to learn something that's not only in their own interests but will benefit the wider community of which they’re part,” Anna said.

“The bottom line is that it’s a project to educate young people so that they can help others. And it's not just a case of knowledge; it's about giving them the confidence to act in an emergency if they ever have to.

“Hopefully they’ll never need to use these skills, but the important thing is that if they have to, they’ll not only know what to do – they’ll also have the confidence to do it.”