Armagh City Choir back in concert 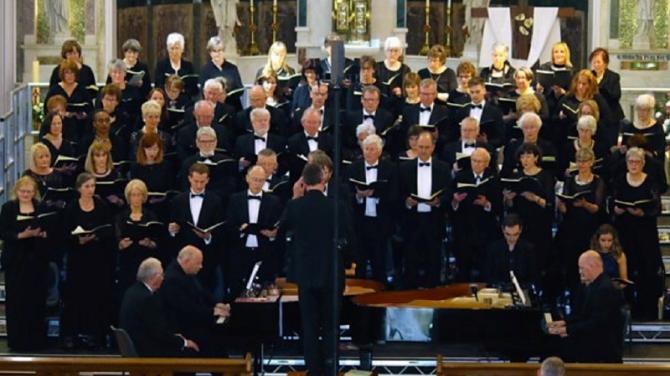 ARMAGH City Choir is set to welcome back music lovers to its first live concert in over two years.

Founded in 1987, the Armagh City Choir has been a constant in the Armagh cultural calendar for over 30 years.

Like many local communities, however, it met real and difficult challenges in adapting to the pandemic.

After an incredibly successful performance of Handel’s ‘Messiah’ in November of 2019, the choir had to forgo in-person rehearsals in response to the growing health crisis.

Ultimately, the situation proved too difficult, and performances were also cancelled.

Conductor Michael Harris remarked, “While everyone missed making music together, I think it was the lack of social interaction which proved to be the most challenging.”

The choir did hold various quizzes and zoom practices, but as he points out: “they simply didn’t ‘cut it’ with regard to the enjoyment of collective singing.”

"However, despite all the challenges, everyone is delighted to get back to choir and there is a real sense of excitement in singing together after such a long period of isolation."

Now, after two long years of waiting, the 55-strong choir is just days away from finally holding another live performance.

But they won’t be doing so alone.

With an orchestra of local players, many of whom are members of the Ulster Orchestra, being led by Philip Walton, long-time friend to the choir Philip Elliot accompanying on the organ, and soprano Rebecca Murphy of the Internationales Opernstudio as a guest soloist, it should prove to be a night to remember.

Speaking on the setlist for the night, Mr Harris had this to say: “We had chosen to sing Karl Jenkins’ ‘The Armed Man’ back in 2019 and are only now performing it.

“I think it is a piece which is befitting of any time, but of course with world events as they are presently it takes on an added poignancy.”

A majority of the setlist will be made up of music composed by Karl Jenkins, with a mix of choral and instrumental pieces, including the well-known ‘Palladio’ for strings.

He added, “The first item the orchestra will perform will be a beautiful piece by Ukrainian composer Myroslav Skoryk, as a gesture to remember the horrific suffering that has come about as a result of the war in Ukraine.”

After a difficult two years, the excitement for the performance is palpable within the choir.

“It would be lovely to see a full house again, like we did for our last performance in November 2019.

“It will be a wonderful opportunity to support the choir who have worked so hard to make this concert happen, but also to enjoy live music again!”

The concert will take place in St Patrick’'s Church of Ireland Cathedral on May 7 at 7.30pm.

If you would like to attend the concert, tickets can be obtained from members of the choir for £15.

Alternatively, there will be an opportunity to purchase tickets at the door, though availability may be limited on the night.

There will also be an opportunity to donate to DEC Ukrainian Humanitarian Appeal at the concert.