Heart-rate running regime and change of diet – and voilà! 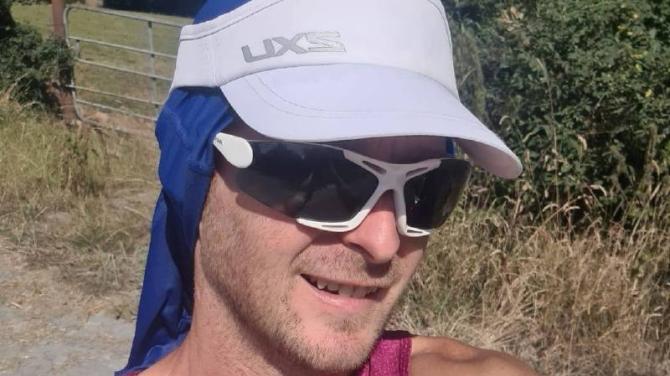 A CHANGE of heart regarding his approach to athletics has worked wonders for Tandragee runner Gareth King.

Now the fastest Irishman ever to have run 100km – that’s not a misprint – he has been named as a member of the team which will represent Great Britain and Northern Ireland at the International Association of Ulrarunners’ World Championship in late August (see today’s Gazette back page story).

His performance in the 100km Anglo Celtic Plate Home Countries International on April 3 in Perth (Scotland, not Australia) saw him earn one of the four positions for male athletes, with a quartet of women filling the remainder of eight-strong team’s vacancies.

His inclusion was the proverbial no-brainer, for having clocked 6:47:33 in Perth, he became the first – and, to date, only - Irishman to have broken the seven-hour barrier, chopping a massive 25 minutes off his own Ulster record, and 15 minutes off the previous Irish record - Keith Whyte’s 7:2:42 in France in the autumn of 2015.

The discovery of a new heart rate-based training format in tandem with a diet of leafy greens, salads, meat, eggs, oily fish and ‘good’ fats has transformed his fitness and results. Now 42, he says he has never felt better.

“No fatigue, no lethargy and feeling fitter than I've ever been,” is how he describes his current state of mind and body.

Having finished 4th overall in last week’s Belfast marathon, he is taking things easy for a few days.

“I’m just letting things settle down, getting a bit of physio and then it’ll be back into building up for the Worlds on August 27,” he explains.

“It’s all go; I’ll probably do a 50km run in June; there’s a 24-hour run in Belfast, so I reckon I’ll do that. And then some time in July I’ll maybe squeeze in a 12-hours endurance run, just to get the time into the feet. It won’t be a massive effort – just enough to get the distance into the legs.

“That will be beyond what I’ll be running in Berlin, so it’ll be good to get that behind me ahead of going to Germany.”

Prior to last year’s Anglo Celtic Plate Home Countries International he had never run a 100km race for Northern Ireland. He had, however, run ultradistances, 24-hour events and so-called backyard ultras. As well as that, his marathon times had been good – 2:33 in Belfast in 2021

“In order to be selected for Northern Ireland there's criteria to be met,” he says. “There's certain times you have to have achieved for the marathon, half-marathon and 50km road trail. You’re also asked if you’ve done looped or 24-hour events. I was able to say ‘yes’ to all of those.

“The reason they [the NI selectors] approached me was that I’d done the 50km at Down Royal in 2021. That was my first 50km road race and I'd finished second in it.”

His time – 3:01 hours was just outside the sub-three hours mark. And that was sufficient to persuade the selectors to suggest he should his hat in the ring for the SEP Athletic Booster Club.

“I'd never even heard of that, never mind thought of it,” he jokes. “But since they were telling me to go for it, I said I would. When the application form arrived online, everything they were asking for, I'd done.

“About three weeks later they called me to say I’d been selected, so that was my first NI international vest – 2021 at Mondello Park.” (Co Kildare).

In what was an incredible start to his international career, he broke the NI record by 22 minutes!

“It wasn’t bad, I suppose,” is his modest assessment of that memorable day’s work. “And then, over in Scotland this year, I broke the Irish record as well as my own record which I'd set in 2021,” he continues.

“Knowing that I am the only Irishman ever to have run 100km in under seven hours has really hit home,” he admits. “I know that down the line, somebody will break that. There will be fitter and younger athletes who'll be inspired to have a go and there’s no doubt that some of them, some day, will break it.

“For me to be the first person in the whole of Ireland ever to run 100km in under seven hours, is just crazy. I still don’t think I’ve quite managed to get my head round that.”

Asked if he has surprised himself, he pauses briefly before replying, “Yes, I have – 100%. The things that are happening to me now are...well, just happening.

“I never ever thought I could do this, but at the minute I just seem to be ticking things off, one after the other. Like I said, I don’t think it has sunk in.

“Between getting called up for these different things and then running the way I am when I get there – that’s all just amazing. Unbelievable.”

Running in Belfast, he reveals, is something which occupies a special place in his heart and head.

In an attempt to explain his exceptional progress, he offers, “The way my running has come on in the past three years is remarkable, so it’s just hard to take in. In the back of your mind you’re always thinking, ‘I’ve just done this and I'm over the moon’. And then you go out and you run another really good race and you think, ‘Flip me!’

“And then you begin to wonder how much more you might be able to do? I do believe I can still run faster in another marathon and take that time down a bit more. But that’s how it has been in the past couple of years – just progressing and getting better.”

He puts it all down to having learned to run in synchronicity with his natural heart-rate. Once he could see that his times were improving as a result of the changes he’d made to his training regime, he was hooked.

“At first it seemed that it wasn’t going to work, so I was a bit disappointed to tell you the truth,” he says. “In order just to keep your heart rate constantt, it was frustrating running 10-minute miles and walking up hills. But after a couple of weeks of this I began to notice a slight difference, so that convinced me to give it another week.

“I did that, and I could see more improvement and I was starting to feel things were sharpening up. And within eight weeks I’d lost 13 kilos (2st 0.6lbs) and my pace was down from 10.5 minute miles to 8.5 minutes – at the same heart-rate.”

And what about those dietary changes?

“Having dropped out all the rubbish and carbohydrates, I felt really, really good and really, really strong. I've never felt as sharp or as alert in my life. No tiredness, no lethargy – none of that stuff. I’ve just completely wiped those things out and I feel great all day, every day.

“What I’ve been doing just seems to have totally re-energised the body – and the body’s loving it.

“Since dropping the carbohydrates and instead eating a high-fat, high-protein diet, what actually has happened to me is that when I’m running aerobically, which is easy, I’m actually training my body to fuel itself in a different way.

“At the outset you’re depleting the carbohydrates out of your body. But because you aren’t training hard, you don’t need them. So your body starts to say to itself, ‘Right, there are no carbohydrates here so I need to find fuel from somewhere else’. And the ‘somewhere else’ is your supply of body fat.

“It’s a process called 'fat adaptation' and whenever you can get your body to burn fat at a high percentage, you no longer need fuel for long runs.”

He tells me, “Normally my long run every Sunday morning is anywhere between 22 and 28 miles. Nowadays I can do that after a 12-hour fast – with no fuel and no water on the run – and then come home, have a coffee and an omelette and that’s me sorted.

“That's not even an issue – and then the next morning I’m out training again (4.45am start, note). That’s the transformation I’ve experienced.

“I was doing training runs at 7-minute miles, so for me to switch back from that to 10.5 minute miles and having to walk hills rather than running them was hard to take, not least because I enjoyed going out and just having a good, hard run.

“But that had to change, so not easy. But once I started to see the benefits, I knew it was working – and thankfully it didn’t take too long for me to grasp that.

“I became engrossed in what was happening to me, got in touch with some really good people, kept going and now my results – and my lifestyle – confirm that this works for me.”

The facts certainly seem to bear that out.