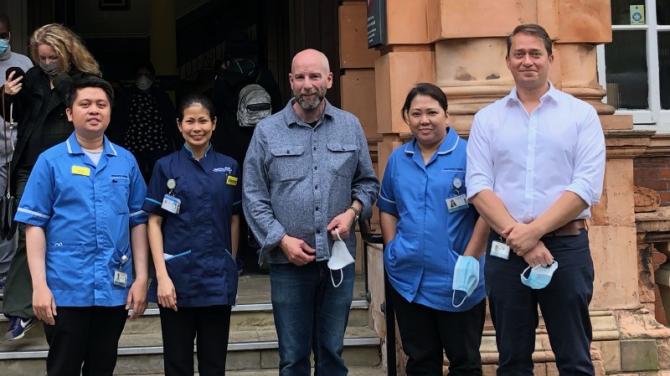 A LOCAL author has given all the profits from her successful first book towards the search for a cure for Parkinson’s Disease.

Retired schoolteacher Lorna Quin published ‘Yes We Have No Bananas’ towards the end of last year.

It’s a collection of stories and memories from older people who were children during World War II, including Edsel Muldrew from Markethill who remembered how the American troops carved a beautiful Native American chief’s head on a tree in Gosford Demesne.

The book proved so popular that the first print run completely sold out.

Another run was quickly arranged and a small number of copies are still available.

Lorna, meanwhile, is working on a second volume after being contacted by, or put in touch with, many more people with fascinating memories of that tumultuous time.

“Originally, I wanted to do something to remember my uncle who had Parkinson’s disease,” said Lorna.

“And I thought if I could, at the same time, make some money to help with the search for a cure for PD then it would be a win/win situation.”

Writer and broadcaster Gordon Adair wrote the foreword to the book.

He was diagnosed with Parkinson’s just over 10 years ago.

Recently, he was at the Leonard Wolfson Centre for Experimental Neurosurgery in London to see how the money raised was being put to use and to hear how grateful the staff there are for such donations.

Gordon said: “Leading edge medical research, such as that being done at the Leonard Wolfson Centre, takes a staggering amount of money from a wide-range of funders.

“Donations from private initiatives like this make up such a significant part of the budget which allows the dedicated and hard-working staff to get on with the search for a cure and to bring that cure a little closer every day.”

‘Yes! We Have No Bananas’ began life as a research project she undertook on behalf of Markethill District Historical Society.

However, as a result of what she was learning, Lorna very quickly decided that there was more than sufficient material of genuine interest to merit a book.

Her interviews with people from the Markethill area – and in some cases further afield - yielded a wealth of memories and information, not least the fact that due to rationing and the difficulty in importing food from overseas, inevitably there were significant restrictions.

Lorna told the Gazette, “I wanted to preserve these personal stories for posterity to celebrate the resilience and optimism of that war-time generation. Each story told is unique.”

Lorna explained, “I have dedicated this book to my late uncle, John Grant, who lived with Parkinson's for many years.

“And I have chosen the title as children during those war years never had the luxury of imported fruit due to restrictions on food availability.”

Adopted Portadown man, Stephen Hartley, tells of his childhood experiences in Halifax, Yorkshire and signing up for the RAF, while Ann Cassidy recalls her early years in wartime Armagh.

Edsel Muldrew from Markethill shares memories of having grown up in the grand entrance gate lodge of Gosford Castle.which was used as wartime camp for soldiers.

‘Yes! We Have No Bananas’ is not an original title, of course.

Back in the 1920s it was a highly successful American comedic song by Frank Silver and Irving Cohn. It enjoyed five weeks at No 1 in 1923 and the many artists to have recorded it over the years included Billy Jones, Billy Murray, Arthur Hall and Irving Haufman.

It was also recorded by Benny Goodman and His Orchestra and Spike Jones and His City Slickers.

A small number of copies of ‘Yes, We Have No Bananas (vol 1)’ are still available at the following outlets: Hunter’s Markethill, Whittle’s Armagh, Macari’s Armagh, Woods’ Spar Richhill, Garden Fresh Tandragee, Winnie’s Portadown and The Petty Sessions Poyntzpass or by contacting Lorna via email ricloelehq@hotmail.com