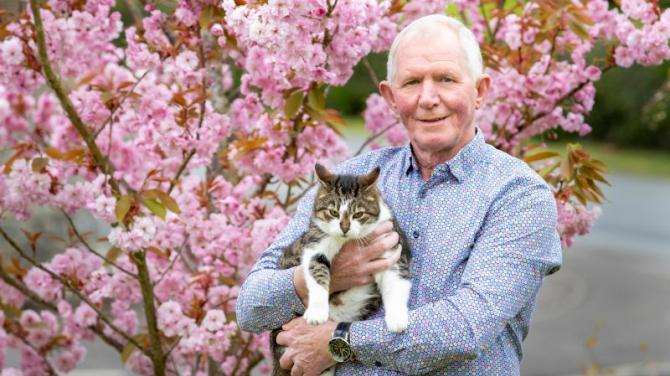 A CAT from Bessbrook who raised the alarm as the family home filled with deadly smoke has been named as a finalist in Cats Protection’s National Cat Awards 2022.

Spuds beat hundreds of other entries to take his place as one of three contenders in the Most Caring Cat category, celebrating cats that positively impact a person’s health or wellbeing.

The former stray was selected as a finalist in recognition of how he raised the alarm when dripping fat from a turkey created plumes of smoke as Brendan Curran, wife Jane, their grown-up children and newborn grandson slept on Christmas Eve 2019.

As the kitchen filled with smoke, Spuds repeatedly jumped on Brendan’s chest to waken him, alerting him to the potential disaster.

Brendan said: “We’d put the turkey on to cook overnight like we always do on Christmas Eve and then all gone to bed. We had my son, daughter, her husband and their newborn son staying with us and were looking forward to a special day.

“I was fast asleep and then suddenly there was a thud on my chest, and it was Spuds jumping on me. I pushed him away and he did it again.

“Spuds is not an affectionate cat, he is a former stray and although he likes to be part of the family, he’s not touchy-feely. So when he jumped on my chest as I slept, it was out of character. I took him downstairs, a bit annoyed that he’d woken me, and when I opened the kitchen door there was a wall of smoke. I couldn’t see the walls.

“The fat from the turkey had been dripping in the oven, making it exceptionally hot and creating plumes of smoke. The smoke alarms hadn’t gone off, and I genuinely think if Spuds hadn’t raised the alarm things could have been very different.”

Cats Protection’s National Cat Awards, organised by the UK’s largest cat charity, is an annual celebration of the real-life stories of heroism, loyalty and companionship in the feline world.

If Spuds wins his category, he will also be in with a chance of being crowned National Cat of the Year, following in the paw prints of previous winner Minty, a three-legged moggy from Holywell, Wales, who helped six-year-old Connor Raven cope with severe learning difficulties and medical conditions.

Cats Protection’s awards organiser Kate Bunting said: “Spuds may not be a lap cat, but he is clearly devoted to his owners. His story goes to show that even the most independent and feisty cats can be remarkable pets. His quick-thinking actions could have saved the lives of six people, for which his owners will always be grateful.”

Category winners will each win a prize package of a trophy, a £200 pet store voucher and a year's subscription to Cats Protection's magazine, ‘The Cat’. The winner of National Cat of the Year will also receive an additional overall winning trophy.