Coffee and hill-walking to raise funds for Marie Curie 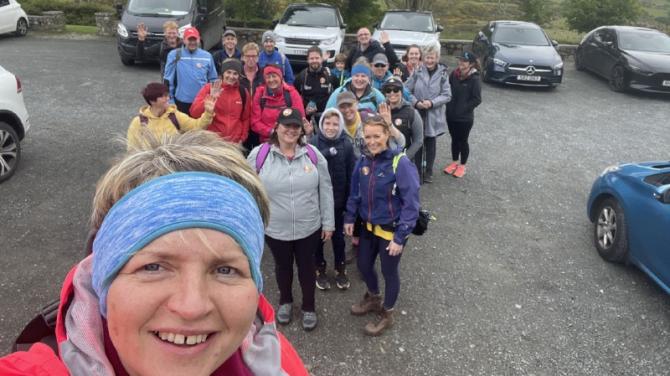 THE two events organised by the Nichol family to raise money for Marie Curie have proved to be great successes.

In recognition of - and gratitude to - Marie Curie nurses who tended to the late Alexander Nichol, members of his family organised a recent coffee morning in Hamiltonsbawn Orange Hall.

That was followed last weekend by a trek in the Mourne Mountains. Aptly, they dubbed that ‘A Dander for Alexander’.

Last Saturday, 28 walkers – the youngest of them just six, the oldest in his 70s – took to the hills to follow the route set by local primary school teacher, Simon Pollock.

The late Mr Nichol’s daughter, Diane, who was to the fore in both events, told the Gazette, “The coffee morning was amazing. It was absolutely packed and it brought in nearly £3,000 – with more still coming in.

“I reckon there must have been at least a couple of hundred people through the door. So many, in fact, that with it having been such a really great day weather-wise, we ended up putting tables out on the street!

“It was more successful than we'd ever imagined, so our thanks to the Gazette for publicising the event so prominently for us.

“We don't have a final figure yet, because money is still coming in, but as things stand we’re not far short of £3,000, which is brilliant. It has exceeded our expectations and I can't thank local people enough for their support.

“In particular I’d single out Shirley Nichol who was brilliant in organising things. But there were loads of others, too, helping with various things, all of which helped make it such a success.”

So too was the ‘Dander for Alexander’, as Diane went on to explain.

“Altogether we had 28 walkers, though some did only part of it,” she said. “Thankfully all of us returned safely to the fold.

“Those who completed the whole walk did about 10 miles. The weather was kind to us as well, which helped.

“We went up through Hare's Gap, along the Brandy Pad and then summited Commedagh.”

From there they followed the Mourne Wall back round to Hare’s Gap. All told, it was a six-hour walk, at the end of which there were no casualties other than a few stiff legs and sore feet.

“They were a lovely group of people,” said Diane. “Everybody got on really well, so there was a bit of craic and a bit of banter which helped us when we were getting it tight!

“The route Simon planned was just right for our group – not too easy, but not too difficult either. I thank him for that as well; for we couldn’t have done this without his help and his knowledge of the mountains.

“Again, the final total is unknown at this stage. Individuals have their own Just Giving pages in their own areas, so we'll see in due course exactly how much has been raised.

“I’m delighted with the outcome,” Diane said. “As a family, we are blown away by the support we’ve received and the generosity people have shown. It's very much appreciated and it has been a lovely tribute to dad.”

Following the walk, all of the participants had a meal at the Meelmore Lodge in Bryansford where they were joined by Diane’s brother, Robert, and his family.

The pair’s brother, Graham, was unable to attend as he was at home tending the family farm of which their late father had taken such care up until shortly before his death last summer.