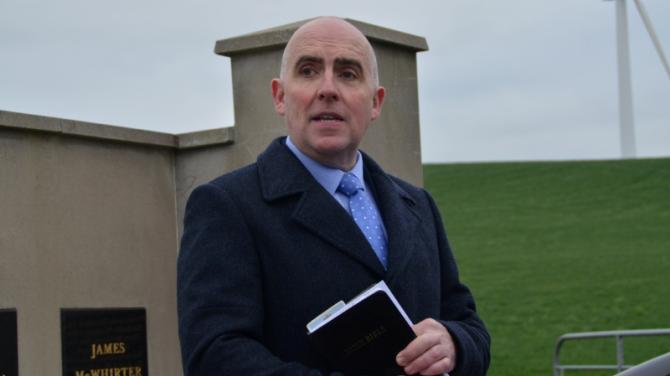 A MARKETHILL preacher has been reported to police after an online video emerged in which he called Catholics ‘rats’ who should be dealt with ‘by the rifle and grenade’.

The video has met with a furious reaction from SDLP MLA Justin McNulty who described it as ‘unhinged’.

Mr McNulty said the legal implications of Pastor Barrie Halliday’s actions should be considered, given that his comments could reasonably be viewed as ‘an incitement to violence’.

Mr McNulty commented: “This isn’t the first time that Barrie Halliday has disgraced himself with unhinged online videos.

“Two years ago, just hours after the death of Séamus Mallon, Halliday took to social media to sully the name of a man whose boots he was not fit to lace.

“Now he has used his platform to preach hate and dehumanising vitriol, describing Catholics as rats and referencing ‘the rifle and grenade’ as the way to ‘get rid of them... including the young upstarts’.

“Now that he’s been caught out, Pastor Halliday claims that the video was ‘accidentally’ made public.

“Accident or not, this hate has no place in our society, and it needs to be pulled out by the roots.”

Mr McNulty added: “I have been contacted by local parents who are deeply uneasy at Pastor Halliday’s rhetoric and the action it may provoke in others.

“We have often seen before, most recently just last month in America, how motivated hate can spill over into violence and tragedy.

“Local parents have urged me to contact the police and articulate those concerns.

“I have been in contact with police and will be writing to the Justice Minister on this issue as well. We’ve come too far to allow troubled individuals like Barrie Halliday to plunge us back into distrust, danger, and violence.”

A police spokesperson said: “Police received a report and are aware of online footage circulating. Enquiries are continuing.”