Cheers to The Toby Jug and Sally McNally's 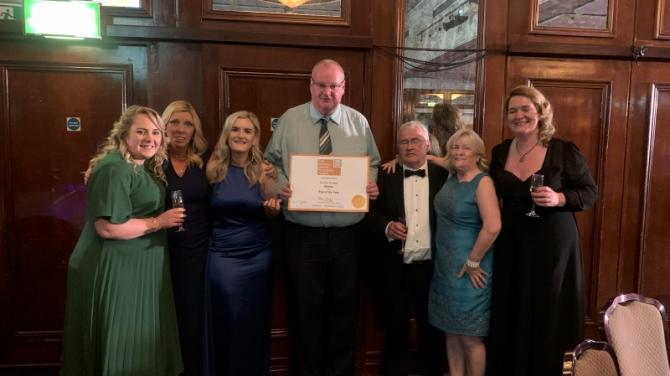 THE Toby Jug is Northern Ireland’s Pub of the Year.

Having been voted Co Armagh’s Pub of the Year, it then pipped the best in counties Antrim, Derry/Londonderry, Down, Fermanagh and Tyrone to win the Northern Ireland overall prize and title.

The Irish Street hostelry scooped the prizes at the NI Hospitality Awards 2022 which were staged last Tuesday (May 31) at Belfast’s Europa Hotel.

Nor was The Toby Jug the only double winner from the Armagh City, Banbridge and Craigavon Borough Council area, for Sally McNally’s from the Markethill Road on the outskirts of Portadown also achieved a similar one-two.

Having first been awarded the prize for Co Armagh's Best Casual Dining Restaurant 2022, Sally McNally’s went on to win the overall NI prize in that category.

The proprietors of The Toby Jug, Paddy and Patsy Lawlor, told the Gazette, “We're absolutely delighted at this win. The bar has been in the family for 100 years and we ourselves have been running it since 1996.

“This is the first major award we’ve ever won and we think it’s a reflection on the customers and staff that we've now had this success.

“We’d just like to thank everybody for their support. It’s hard to know what else to say other than that we’re overwhelmed at having achieved this against really, really tough competition.

“To have won in Co Armagh was special, but to then have been voted the best in Northern Ireland is brilliant for us. Very, very pleased and very, very proud.”

The event was hosted by Cool FM’s Rebecca McKinney, who presented a total of 33 awards to the winners of the various categories. Acknowledging “their hard work and determination in making Northern Ireland the incredible place that it is and that we all appreciate,” she explained that the winners had been voted for by the general public.

That being the case, she said, “They are a true reflection of the winners’ success, professionalism and ethos - three qualities that set them apart from the others.”

A spokesperson for The Northern Ireland Hospitality Awards 2022, said: “These have acknowledged some incredible individuals who make a positive difference to the hospitality industry.

“It was great to meet with inspiring people who work hard and go above and beyond the call of duty to meet their guests’ needs and improve the country’s cultural scene.

“We would like to congratulate all finalists and winners for their amazing achievements.”