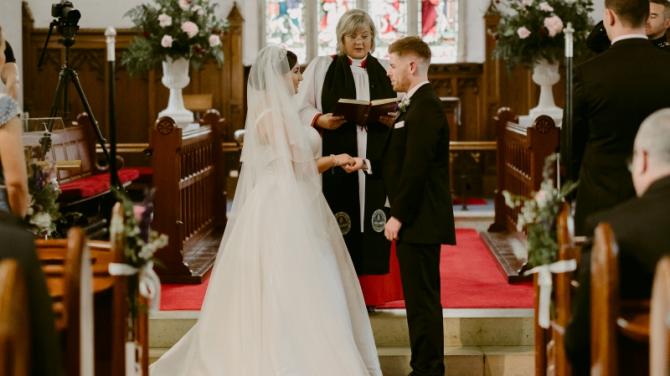 THE words ‘Archdeacon marries daughter’ may be slightly misleading. Fear not.

Because that is exactly what happened on Friday in Mullavilly where, in the Church of Ireland parish church, Miss Rebbeca Cairns - daughter of the Rector, Rev Elizabeth Cairns, who is also Archdeacon of Ardboe – married Mr Jack McClelland in a ceremony over which her mum officiated. Simple, right?

Speaking to the Gazette last Tuesday, the rector joked, “While I can see where ‘Archdeacon marries daughter’ might cause some confusion were it to appear in a headline, that's what will be happening on Friday.”

She had already shown her adaptability and appreciation of harmless fun by joining her daughter’s 18-strong hen party in Benidorm, where she shared a room with the groom’s mother, Donna McClelland.

“My first-ever hen do!” the cleric laughed. “The Archbishop was keeping me going about it when I got back, but I just told him, 'What happened in Benidorm stays in Benidorm!'

“I'm not easily shocked by any stretch of the imagination, but I have to admit that my eyebrows were raised on a few occasions! But no, we had a fantastic time. Great bunch of girls, great fun.”

The big day itself saw the Archdeacon carrying out not one but two important, high-profile roles, namely mother of the bride and officiating cleric.

Speaking in advance of the occasion she explained, “In the morning I will go over to the church and carry out the same normal preparations I do before any wedding – primarily organise the registers.

“Usually I’d then meet the groom and best man and get them organised in their seats. But this time I'll be leaving somebody else in charge of that, because I'll be going back over to the rectory where I'll change into my mother-of-the-bride outfit.

“I'll then go back across to the church with the bridesmaids, have the obligatory photographs taken with them at the door and then go in, head to the vestry and change into my clerical robes.

“So, hat off, robes and collar on. Then I’ll come out – as I always do at any wedding – speak to the boys at the front of the church. I’ll then make my way to the back to meet the bridal party – my daughter and her daddy, my husband – come back up and do the service.

“After the signing of the register I'll go back into the vestry, robes off, hat back on and then I'll be able to exit from the church with my husband and the other family members.

“So it’ll be a wee bit like Stars In Their Eyes: ‘Today I am going to be’ – or the old Mr Benn cartoon where he'd walk along the High Street, go into shops and change into different things!” she joked.

“Let's just say that it’s the logistics of this wedding that are slightly different. Obviously, during the service, I won’t be sitting at the front beside my husband – because I’ll be marrying my daughter.”

With it being the Jubilee weekend, even after the service, there was another detour from normality with the 150 guests adjourning to the church hall for afternoon tea.

Archdeacon Cairns’ pre-event explanation was, “The whole theme will be Jubilee-related, so the hall will be decorated.”

And she then disclosed, “I was hoping to get a couple of days off after the wedding, but no. Because of the Jubilee I have to come straight back for Sunday’s celebration of that here in the church. And that will be followed by a Jubilee lunch in the hall.”

As far as she is aware, almost certainly this was the first wedding out of the Mullavilly rectory, for none of those to whom she spoke could remember a previous example.

“I know there definitely hasn’t been one since 1950,” she confirmed. “The rectory has been here since just before that and nobody can remember a wedding from it in that time. If there was one, it will have been in the 1940s.”

Asked if Friday’s wedding had been planned to coincide with the Platinum Jubilee celebrations of the Queen’s 70-year reign, the answer was ‘no’.

“Rebecca set the date - Friday, June 3, 2022 - about two-and-a-half years ago, before we’d ever heard of Covid. So unlike what has happened to some unfortunate people, Rebecca and Jack have had no postponements or anything like that.

“However, Saturday, June 4 is Rebecca's birthday, so getting married the day before that may have had something to do with her having chosen that particular date.

“At that stage, though, there was no talk of it being a Platinum Jubilee weekend or anything like that. That came later, so I think those two events are just a coincidence.”

Friday’s reception was at Cabra Castle Hotel, Co Cavan, where the proprietors flew the Union Jack alongside the Irish tricolour in deference to the fact it was the Queen’s Jubilee – a gesture that was much appreciated by the sizeable party of northerners.

And also in keeping with the Jubilee theme, rather than being numbered, the tables were named after Royal residences – Buckingham Palace, Windsor Castle, Balmoral, Holyrood et al. And the colours used in the invitations to the wedding and the Order of Service booklets were, aptly, white and gold.

The newly-weds are honeymooning in Mexico and Florida en route to joining a Caribbean cruise.