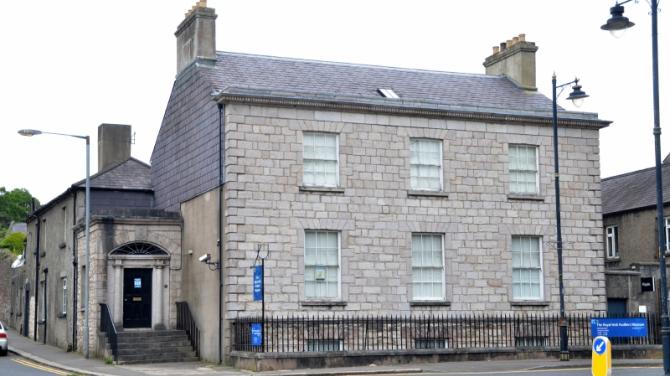 THE Last Post is set to sound on the city’s famous Royal Irish Fusiliers Museum with confirmation it is to close, the Ulster Gazette can reveal.

After a long military connection spanning some 250 years and ahead of the 60th anniversary of the museum opening next February, it has been confirmed attempts to keep the popular attraction open have been unsuccessful.

It now looks set to leave The Mall in Armagh City and move to a new site in Belfast in late 2024.

Museum Curator, Caroline Corvan told the Ulster Gazette: “Regrettably the Royal Irish Fusiliers Museum will be closing in the next couple of years and moving from its home in Armagh to a new site in Belfast.

“The new museum will be on two sites, Belfast and in Enniskillen Castle where the Inniskilling Museum is currently and will remain. It will house the amalgamated collection of the antecedent Regiments.

“The move is anticipated to be late 2024. The new museum will aim to tell the stories of the Regiments in a new and innovative way.

“Despite attempts to keep the museum in Armagh, this has proved unfortunately unsuccessful.

“If the museum closes then the military connection with the City of Armagh for some 250 years will be gone.

“The staff and volunteers of the museum are deeply saddened to see the museum leave its ancestral home and it is especially poignant when we will be celebrating our 60th birthday next year in February 2023.

“We will be celebrating our birthday with an exciting exhibition showcasing the museum and its collection over six decades.

“The museum is part of the tourist attractions of Armagh and we are part of the many host days including Georgian Day and European Open Day.

“We also offer educational programmes with the local schools and it will be a great loss to Armagh where the Regiment began in 1793.”

Independent Unionist Councillor Paul Berry has expressed his shock at the proposed move and is set to raise the issue with the relevant authorities.

“Recently, I was reliably informed that there are plans to close this well renowned military museum in the City of Armagh,” Councillor Berry said.

“Given the 250 years of military connections with Armagh City, I was deeply disappointed and shocked by these plans.

“The Royal Irish Fusiliers Regimental Museum at Sovereign’s House in Armagh has been a strong part of history and at the very fabric of the city for many years and this plan to close it would be a massive blow to the area’s tourism and historical connection. The museum has been an integral part of Armagh City, especially with the former depot at Gough Barracks for the Fusiliers and St Patrick’s Church of Ireland being the home to its Regimental Chapel.

“The museum has a vast amount of military uniforms, medals, regalia and indeed two Victoria Crosses won by Private Robert Morrow and Lieutenant Geoffrey Cather at the Western Front in the First World War, and also not forgetting the Regimental archives and library.

“Such plans to move all to Belfast is most unfortunate as Belfast has no link to the former Regiment in the British Army.

“I can recall a few years ago this idea had been mooted, but thankfully it did not progress, but sadly it seems that these plans are progressing.

“I will be raising this with the relevant authorities and also our council chief executive and councillor colleagues to see if we can try to continue to ensure this Regimental Museum remains in Armagh City where it rightfully belongs, given the long history and connection with the Republic of Ireland in areas such as Cavan, Monaghan, Louth and Dublin.

“The council has always worked very closely with the Regimental Museum on The Mall and I believe it is vital that this museum with such rich local history and connections remains in Armagh City.

“I see no real benefit relocating this museum to Belfast which has not the same rich and long established links and history like Armagh City.

“The loss of 250 years of strong connection to Armagh City of the Royal Irish Fusiliers Regiment will be challenged locally and I hope something can be done to ensure it remains in the city for many years to come,” Councillor Berry added.

Sovereign’s House - built and lived in by the then Mayor of Armagh in 1810 - has been the home of the Royal Irish Fusiliers Museum since its grand opening on Saturday, February 23, 1963.

Armagh, as well as Monaghan and Louth, were the recruitment areas for the 87th and 89th Foot, the forerunner of the Royal Irish Fusiliers, which was raised in 1793 and remained as a line Regiment of the British Army until its amalgamation in 1968 with the Inniskilling Fusiliers and the Royal Ulster Rifles, becoming the Royal Irish Rangers.

Gough Barracks, which originally housed the collection, was established in 1773 and it became the Depot of the Royal Irish Fusiliers in 1873.