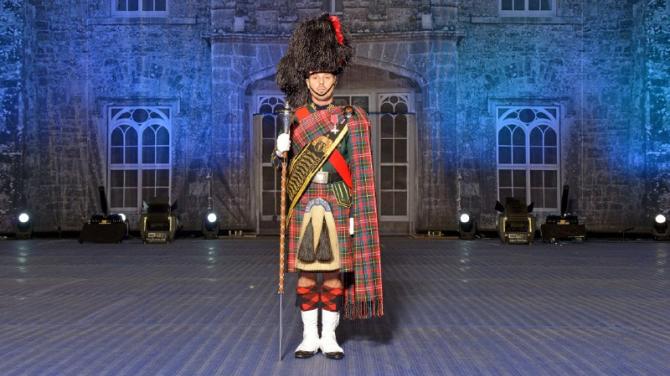 KEADY man Brian Wilson MBE once again has been given the responsibility of producing the Belfast International Tattoo at the SSE Arena.

Having had to postpone the event in 2020 and 2021 due to the pandemic, plans for the 2022 spectacular are at an advanced stage.

Asked what remains to be done, 51-years-old Brian told the Gazette, “In terms of organisation, it's going very well. So what else has to be done? Well, there's the not so small matter of selling 12,000 – 15,000 tickets!”

The Tattoo will see evening shows on Friday and Saturday, September 2 and 3, plus a Saturday afternoon matinee performance.

“The 2022 show has to reflect the high standards of the previous years, all the while taking into account what has been a very difficult time for all those in the entertainment industry,” Brian said.

Those performing will be the Band of the Royal Irish Regiment along with the 2nd Battalion Royal Irish Regiment Bugles, Pipes and Drums, The Pride of Ballinran Flute Band and Ballymageough Accordion Band (both from Kilkeel), the Royal Tara Dance School (Carrickfergus), the White Rose Highland Dance Company, the Tenor Drum Display Team, the Belfast International Tattoo Drum Major Display Team – all champions - an acrobatic BMX team, plus, of course, the much-loved Massed Pipes and Drums, the high point of any such occasion.

The Massed Pipes and Drums will feature the crème de la crème of NI musicians, plus a few guests from Scotland.

Past Tattoos have featured outstanding acts from the United States, Canada and Europe. Visitors have included the Royal Canadian Mounted Police, plus the bands of the Ghurkha Rifles and the Irish Guards.

In the first year of the Belfast International Tattoo (2013), the focus was on catering for top-notch bands whose members excel in playing instruments and music in keeping their Ulster-Scots tradition.

In tandem with highlighting the musicianship of NI bands, there was also a desire to acknowledge that of their counterparts from other parts of the world. As well as that, there was an emphasis on saluting the efforts of those who strive to keep the Scottish Highland Dance tradition alive. And, indeed, spotlighting the Ulster-Scots culture as a whole given that it punches way above its weight in terms of the impact made across the globe by people from that background.

A three-times Drum Major of the award-winning show from its inception in 2013, Brian was appointed producer for the Belfast International Tattoo in 2018, this after becoming assistant producer two years earlier.

He was also assistant producer of the successful inaugural Liverpool Tattoo, which was staged in the autumn of 2018.

In handing over to the Keady man, Tattoo founder Colin Wasson, who was the Belfast show’s producer for its first five years, endorsed the appointment of his successor by saying, “Brian brings real zest and vision to the event. He’s more than ready for this challenge, so I know its leadership is being passed into good, experienced hands.”

The Tattoo has enjoyed notable successes, not least its celebration in 2016 of 100th anniversary of the Battle of the Somme.

A recording of that Tattoo duly was given a prime-time Saturday evening slot on BBC2, attracting a viewing audience over 80,000 across the UK and Ireland.

In 2018 it also received a hugely important acknowledgement of its work when – in recognition of its success in attracting overseas visitors - it was voted the Hospitality and Tourism Business of the Year.

Those who went forward to collect the trophy at a gala night at Belfast’s Crowne Plaza were Colin Wasson and the man who has replaced him, Brian Wilson.

Days earlier, the Tattoo had been ‘highly commended’ in the ‘Most Promising Authentic NI Event’ category at the NI Tourism Awards 40th anniversary gig at Belfast’s Europa Hotel.

Asked where his responsibilities for September’s SSE Arena spectacular begin and end, Brian told the Gazette, “I’m responsible for the whole Tattoo – everything from booking the venue, booking the participants, housing and feeding them and setting up the programme of the show itself. My title is Director of the Belfast International Tattoo.”

Recalling the disappointment of having had to cancel each of the past two years’ shows, he explained, “We missed 2020 due to Covid. Last year – 2021 – we had the whole show planned, lined up and ready to go. Then 10 days before what was to have been the opening night the SSE Arena told us they couldn’t stage it.

“That cost us a lot of money and caused us a lot of headaches, for when you have a cast of over 500 and you then have to phone them to say, ‘Sorry, it’s off’, that’s not easy. We’d people coming from overseas, so all of their arrangements had to be cancelled at the last minute.”

When planning for this year began, it was a leap of faith, for Covid was still rampant so regulations were still in place. Given the circumstances, the emphasis on the forthcoming show is ‘local’.

“There’s only one act coming in from outside Northern Ireland and they’re a BMX acrobatic display team,” Brian said. “But although everything and everybody else is local, the standard will be as high as ever, for we’ve a lot of very talented people here, too!”

His route whereby he found himself organising a show at this level and of this scale is interesting to say the least. Back in 2013 when the Tattoo was still at the ‘possible idea’ stage, Brian’s predecessor, Colin Wasson, decided he needed a top-class Drum Major.

Having won three world titles, 17 major championships in NI and 40-plus overseas, the Keady man already was known throughout the world of pipe bands; all followers of the genre in Europe, the United States, Canada, New Zealand and Japan knew the name Brian Wilson.

Once ensconced, he was the Tattoo’s Senior Drum Major for four years. He was then brought on to the event’s production team. His next upgrade was to the role of assistant producer. Now he has reached the top rung of this particular show’s ‘ladder’.

“It’s not easy and over the years we’ve had our ups and downs for one reason or another,” he said. “Funding, lack of funding, Covid – obviously – and very high overheads which include hiring the arena, bringing in light and sound experts, plus all of the kit that goes with a Tattoo. Realistically you’re talking about £300,000 – with very little funding from anybody.”

His paid-job as a health care assistant in Craigavon Area Hospital is far removed from all of this, and when asked how he has managed to learn so many different ropes whilst perfecting numerous skills never previously required of him, he replied, “It’s been a huge step for me, personally, trying to get to grips with all these various – and very big – responsibilities.

“Thankfully Colin (Wasson) has been an invaluable help. His background as an entertainments promoter means he knows a great deal about many of these things, so I've been able to learn a lot from him over the years.

“In my hospital job as a carer I work nights, which I’ve done for about 20 years,” he continued before casually lobbing in, “Before that I was a chef, so my life has been very full and very varied!”

He went on, “The Tattoo – which lasts about two-and-a-half hours - really is about juggling people. There have been moments when we’ve had between 350 and 500 on the floor. So different people, different acts, different stages, different things to consider, different equipment or effects needed.”

Reflecting on his own musical roots, he explained that most of his time had been spent with a Scottish band, Lomond and Clyde, from just outside Glasgow. To that can be added 17 years with Syerla Pipe Band from the Dungannon area.

These days, with his award-winning career as a Drum Major continuing, he still does a lot of work with Killeen whose Drum Major, Linzi Hamilton, he tutored en route to her becoming Juvenile World Champion.

Looking ahead to the first weekend in September he told me, “I’ve done Tattoos all over the world; Senior Drum Major in the South African Tattoo twice, and I've been in Basle, Nova Scotia and any number of other places where pipes and drum are popular.

"Unless you're lucky enough to do a wee bit of travelling – like to a tattoo - you really don’t get the opportunity to play with anybody from a different country where there are different types of bands within a different organisation. And that’s a pity.

“But, through Tattoos, I’ve met people from all the world and, as a result, have received invitations to travel to many events elsewhere. That's what has provided me with great opportunities to meet people and do things I could never have done otherwise.

“And that’s the great thing about good music and great musicians; we all love what we do and to meet others who love that, too.”