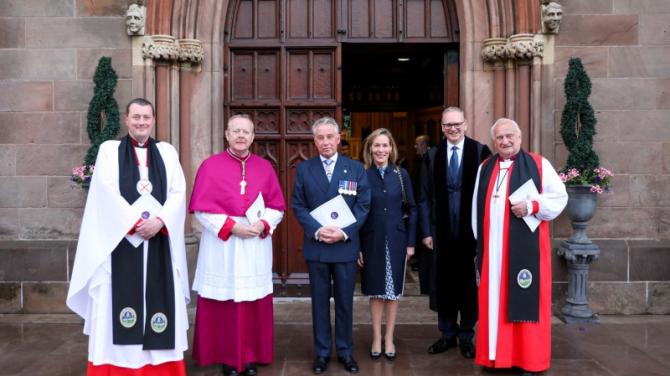 INCLEMENT weather could not dampen the spirits, as Armagh came together to celebrate the Platinum Jubilee in a service of thanksgiving.

On Thursday night, the Reverend Shane Foster, Dean of Armagh, bid a warm welcome to a congregations that spanned the breadth of the community, and led them in a service thanking the Queen for her 70 long years of service to the United Kingdom, held in St Patrick’s Church of Ireland Cathedral.

In attendance was the Queen’s representative, The Earl of Caledon, members of the Armagh City, Banbridge and Craigavon Council, MLA Conor Murphy, and various esteemed members of the greater Armagh community.

The sermon was powerfully delivered by Lord Eames, former Church of Ireland Archbishop of Armagh and Primate of All Ireland, who reflected on Her Majesty’s 70 year reign, her various visits to Northern Ireland, and his own interactions with her.

At one point, he recalled a poignant conversation they had regarding the troubles, the Queen concluding: “Ah, I know of no peoples better equipped to build an eventual peace than the people of Northern Ireland.”

The sermon ended with Lord Eames thanking God for the Queen’s long reign, her service to the Kingdom and the unity she has come to represent.

After the service had concluded, the Armagh Old Boy’s Silver Band was invited to play for the congregation as a collection was made to support those directly affected by the war in Ukraine.

The night ended with the Jubilee Beacon lighting ceremony at the Cathedral’s east end.