Rector reflects on his tractor trek round Northern Ireland 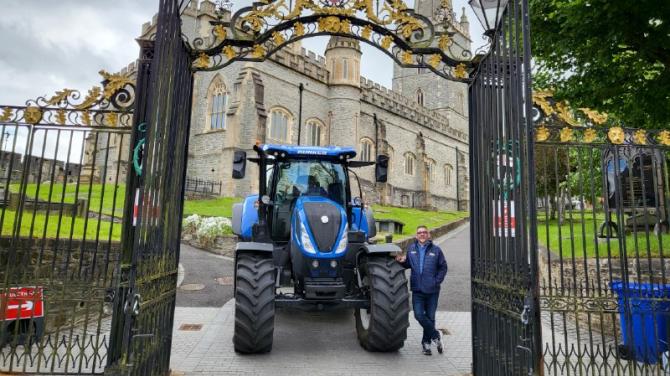 That’s how Rev William Orr described his feelings after completing his ‘Rector on a Tractor’ trek which saw him visit 400 of Northern Ireland’s Church of Ireland cathedrals and parish churches in the space of 12 days. The money raised will be split 50/50 between SANDS (the Stillborn and Neo-natal Death NI charity) and St Mark’s Parish Church Building and Repairs Fund.

His means of transport? An £82,000 New Holland T7 210. With tractors among the vehicles banned by law from using motorways, the roads, lanes and tracks available to the St Mark’s Portadown rector were of the very literal as well as allegorical ‘up hill and down dale’ variety.

As he wove his way north, south, east and west, down, up and across each of the six counties, he admits that there was a moment early on when he wondered if he’d maybe bitten off more than he was going to be able to chew.

“The first full day was a hard one – really hard,” he said. “I left Rathfriland, headed to Crossmaglen, then went right across South Armagh, up the Clogher Valley and over to Florence Court in County Fermanagh.

“It was Monday and I was thinking, ‘This is maybe going to be impossible. I’ve nearly two weeks of it ahead of me and I’m not sure I’ll be able to do it’.

“But do you know what? It taught me to live by faith, because everywhere I went I met somebody who helped me. Every day I was provided with what I needed.”

Speaking to him, it was obvious that it had been a huge learning experience, a point he reinforced by saying, “While I hadn’t fallen out with the Church of Ireland, this undoubtedly has given me a new appreciation of it.

“I’ve seen that as well as having a presence in pretty much every town and village, we’re also represented out in the countryside all over Northern Ireland. So everywhere I went I met people – volunteers - who are working really hard to offer services, keep their buildings open and run youth organisations. All of this goes on all through the year, and it’s done with a heart and a half - and usually a smile as well.

“We try to preach the kingdom and to care for people and this showed me how well represented we - as a denomination - are across the country in terms of where we are and what we do. And do faithfully.”

Expressing his gratitude for others’ generosity he continued, “Even if people are working towards building their own hall or supporting some good cause elsewhere – and all of them were doing that in one way or another – they still were prepared to give me money. That was humbling.”

In his own parish, Sunday’s 10.30am service is known as ‘Manna’, this the name given to the daily food provided for the Hebrews as they made their way from Egypt to the Promised Land.

“Every day I had to put that Manna principle into practice myself,” William said. “While it’s not easy, and I don’t always like it, living by faith requires you to live one day at a time.”

His days in the cab of a giant tractor were very tiring and very long. They began at 7am and continued until 8, 9 or 10 o’clock that night.

“Pretty non-stop,” is how he described it.

Much of his time was spent “dealing with phone calls, text messages, navigation, driving and making sure I didn’t hit anybody or put her [the tractor] through the hedge!”

Again confessing that it was more difficult than he had imagined it would be, he said this was largely due to the number of non-driving things he had to do and the time required to see to them.

“There was a lot to remember - and I’m not good at administration,” he admitted. “So I was constantly trying to keep things in my head and trying not to forget anything important - as well as driving, meeting people or navigating at times when I didn’t have an escort who had the local knowledge I certainly didn’t have.

“But looking back, I can say I enjoyed pretty much every minute of it,” he confirmed. “I met some wonderful people and I’ve had some great experiences.”

In expressing his gratitude and appreciation to the many people who helped him before, during and since his 1,700-mile adventure, he singled out two of his own parishioners in particular – route organiser and St Mark’s Safety Coordinator, Patricia McGuinness, and Stephen Guy, Regional Director of SANDS NI.

“Patricia spent weeks and weeks researching 400-plus churches. How many are there? Where exactly are they? How do you get from one to the other? How do you go about planning this? Without her, this simply would not have been possible. Stephen, from SANDS, and his resource provided invaluable help, too. I owe both of them so much thanks.

“As well as that, I’m indebted to the people I met every day along the way. They encouraged me, gave me money, gave me diesel, gave me a sandwich or threw a bag of snacks into the cab as I was moving off.

“The people who put me up, the escorts – one of whom took a day-and-a-half out of his life to guide me round much of Fermanagh and Tyrone. That man saved me a day; I wouldn’t have got to half of those churches but for him. He knew all the shortcuts, so I didn’t have to waste time doubling back on myself. While he was with me I didn’t even have to think about the route.

“And, of course, Burke’s of Cornascriebe who were so generous in allowing me to borrow that magnificent tractor. Certainly I couldn’t have happened without their generosity and support.

“When I was on my own, I made mistakes, because I didn’t know all the local roads or where exactly I was going. But the escorts knew, and they kept me right.”

The fuel bill was £1,500. Thanks to others’ generosity, two-thirds of that was donated.

“All in all it was an epic adventure,” the St Mark’s Portadown rector said, before adding,“To the best of my knowledge, I’m the only person to have done this. If that’s true then I’ve just done something nobody else ever has. Now, while that’s maybe not a massive thing to anybody else, it’s massive to me because I’m the one who did it.”

And, on reflection, its impact on him?

He replied, “Spiritually, I am enriched and in every way I have been blessed. This has taught me a lot. It has enabled me to think and reflect and be grateful for everything I have had in my life.

“And it has reminded me of the privilege I have in being able to serve the Church of Ireland.

“I’ve met Rectors, Select Vestry members and parishioners who love the Church of Ireland and are proud of their wee churches roles within it. In saying that, I certainly don’t mean any disrespect to other denominations. Like us, they too have churches in so many holes in the hedges.

“But I only had the experience of meeting Church of Ireland folk - and I know now what that experience has meant to me.”

He confirmed that to date just over £10,000 has been donated. More, however, has been promised and money continues to come in.

Anybody wishing to donate can still do so via sandsni.enthuse.com