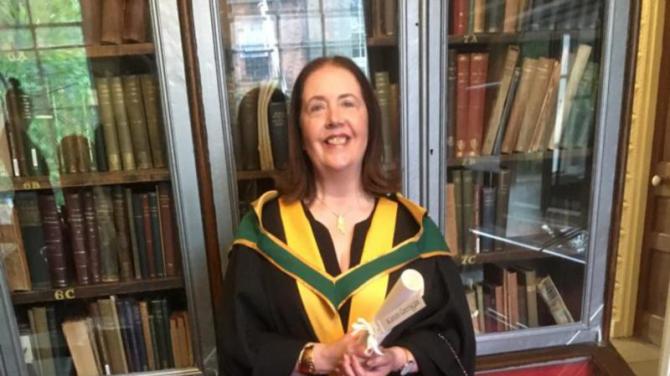 AN academic from Armagh has been given a top honour in recognition of her exceptional contribution to her field of study.

Professor Karen Corrigan has been made an Honorary Member of the prestigious Royal Irish Academy, which was founded in 1785, with the Earl of Charlemont as its first president.

The Professor of Linguistics and English Language is one of 29 new members of the Academy, which recognises exceptional contributions to the sciences, humanities and social sciences, as well as to public service.

Professor Corrigan, who is Director of Research in Linguistics in the School of English Literature, Language and Linguistics at Newcastle University, said: “I am so delighted and feel hugely proud to be admitted to the Royal Irish Academy as an Honorary Member.

“It recognises not only my personal research contribution to a field that I love but also the funding and support that I have received over many years from various sources not least of which is Newcastle University.

“This honour is also shared by all the external partners and members of the communities I have worked with in North East England and Ireland who have challenged and shaped my thinking of how to conduct research that also pays it forward.”

She then secured a place to study Linguistics and Old and Middle English at University College Dublin where she also did her doctorate called: ‘The Syntax of South Armagh English in its Socio-Historical Perspective’ (1997).

It examined a set of folklore materials collected by Michael J Murphy between 1942 and 1974 to see whether local South Armagh dialects changed over time and, if they did, whether women’s dialects changed at a faster rate than men’s.

Professor Corrigan explained, “Locals from Armagh also feature prominently in my book on language and dialect in Northern Ireland published by Edinburgh University Press in 2010.

“My next book, which was published in 2020 by De Gruyter Mouton, is based on interviews with teenagers from two local Armagh schools. The goal of that book was to examine whether newcomers to Armagh City picked up local accents and dialects and whether this was at the expense of their native languages or not.

“I have also undertaken work with CCEA as well as local schools and museums to explain the relationship between language, migration and identity to school children and the public so as to improve school grades and to ensure that newcomers
and their languages and cultures
are valued.”

Dr Mary Canning, President of the Royal Irish Academy, said: “We are immensely proud of these 29 new Members who we are recognising today for their scholarly achievements, their research and international distinction or for significant contributions to Irish society.

“As new Members of the Academy, they will contribute to and strengthen our capacity to provide expert advice on Higher Education and Research policy.”

Professor Corrigan is a world leading scholar in language variation and change.

She is President of the International Society for the Linguistics of English and member of the leadership council of the United States’ National Museum of Language.

The Academy has been honouring Ireland’s leading contributors to the world of learning since its establishment and those elected by their peers are entitled to use the designation ‘MRIA’ after their name.