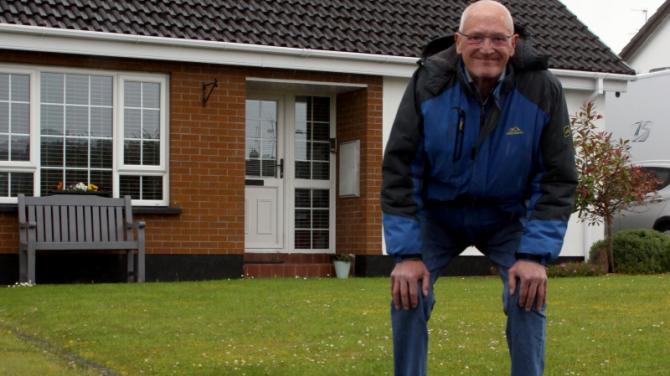 A FORMER soldier, ex-policeman and prison officer has complained to a cable-laying contractor following the loss of services to his Richhill home.

But the company in question, Cushendall-based NMG Utilities Ltd, have totally rejected any suggestion of negligence or sub-standard workmanship on their part.

Mr Billy Tomaselli has lived in Richhill’s Blenheim Drive for the past 34 years. Several weeks ago, NMG employees came to Blenheim Drive to lay internet fibres on behalf of Fibrus Broadband NI.

NMG boast “over 30 years’ experience and extensive knowledge, particularly in the BT and Eircom networks”.

However, Mr Tomaselli says homes in the bottom half of the popular residential development “were left with no street lighting for six days”. And his personal inconvenience was greater, for as a result of the cable serving his home having been cut, he was left without his land line phone service, internet access and Sky TV for two-and-half days.

He told the Gazette, “When NMG’s workmen cut the cable, I contacted BT to see what could be done to fix it. They came out, had a look at the damage and said they’d have to bring in contractors to do the job.

“They reckoned it would take a couple of days to get me connected again, though luckily it didn’t take as long as that.”

He also said a NMG employee had told him the problem was caused by BT having “laid the cable too close to the surface”.

But NMG’s version of events was quite different, for when contacted, the company’s Managing Director, Mr Niall McGuigan, told the Gazette, “The resident contacted our office because his BT line had gone down. He was right; it had. But he failed to understand that it was buried in the asphalt.

“That was standard procedure at the time these houses were built. So BT are not to blame for anything, nor are we.”

Mr McGuigan continued, “The cables were put in when those houses were being built. In those days it was just a case of a cable being laid to the home.

“Through wear and tear, those cables eventually go faulty, or else they get cut. Either way, they all end up needing to be replaced.

“As is the case every time this happens – and sometimes that could be 10 times in the one day – we report it to BT. They then send us back a message confirming that an engineer will be out within 48 hours. That’s standard between ourselves and BT and it’s what happened this time, too.

“Now, this gentleman appears to be making out that we were a shambolic outfit who ought not to have been there. But that is totally untrue. Yes, his cable was cut - nobody is denying that.

“But as I tried to explain to him, it was buried in the asphalt and we were laying a fibrous duct which nowadays goes down to a depth of 300mm (11.8 inches).

“Compare that to the 1970s when they didn't even put the cable in a duct or pipe; they just laid – by hand - an armoured cable to the house, so it was only about two or three inches down.

“There could be 10 of those – more - cut any day on a site and what happens then is that BT come and do a joint on it. So there’s no case of anybody - neither us nor BT - having done anything wrong.

“When we report an incident, BT have up to 48 hours to respond to any resultant fault, which is what they did in this case.

“This gentleman phoned our office and I tried to explain all of this to him. Unfortunately he didn't appear to be listening. My voice is quite high-pitched and my accent is North Coast, so I wasn’t sure if he’d been able to understand me.

“That’s why I got Emma - one of the girls here in the office - to phone him back to reassure him it had been reported so that he knew what was happening and why.

“By the time he phoned us, I’m quite sure everything was already in hand and being sorted out. But his real upset seemed to be that he’d been without his land-line.”

Mr McGuigan said, “Look, I could go out to this man’s house and give him a bunch of flowers and a voucher for Marks and Spencer if that made him feel better. But, legally, nobody has done anything wrong and I just want to stress that.

“The bottom line is that his land-line – the one that has just been repaired – is going to go faulty, nothing surer at some stage in the future.

“It's an armoured cable that has been in for 40 or 50 years depending on when exactly those houses were built, so it will go, guaranteed. And at that stage, BT will gig up his garden or drive-way and lay a duct to his house.

“I fully understand and appreciate that it's really frustrating to be without your land-line for a day or two, but an incident like this is nobody’s fault. We can’t know where exactly a 40 or 50-year old cable is.

“If he doesn’t believe us, we have photographs of the cut cable if he needs to examine those for himself. We cut two tracts about 400mm wide, so the saw cut the cable; it wasn't as if we ripped it out with a digger, though that can happen at times.

“From time to time there are faults – at our expense – so obviously we try to keep those to a minimum. But this wasn't one of them.

“I’m genuinely sorry if we caused this man any upset, but he has to understand how these things work.”

Mr Tomaselli continues to insist that he feels he was “totally dismissed” when he raised his grievance.

He added, “And while I haven’t been out of pocket, I do feel I’m entitled to compensation from them [NMG] for having left me without my land-line, internet and Sky for nearly three days.

“BT, in fairness, have said they’ll compensate me £6.43 for each of the days I was disconnected.”

And he expressed a fresh concern by saying, “I believe we’re about to have BT back in next week to put more cables down, which will mean the footpaths being dug up again, so more mess coming at a time when the pavements already are a disgrace following the most recent work.”

The veteran – three years of military service as a soldier, 27 years with the police and almost 15 years with the prison service – said that this incident “has taken a lot out of me”.

“One way or another, I’ve served the Crown for over 45 years, so I think I deserve better than this,” he said. “The time I’ve wasted over this and the stress it has caused has annoyed me a lot.

“It’s just the way the whole thing has been handled and the way I’ve been treated,” he continued. “When the cable into my house was broken, they didn’t even bother to tell me it had happened.

“When I asked the foreman why, he just said it was BT’s problem, not his. He didn’t seem to care in the slightest - and that’s what really got to me.”