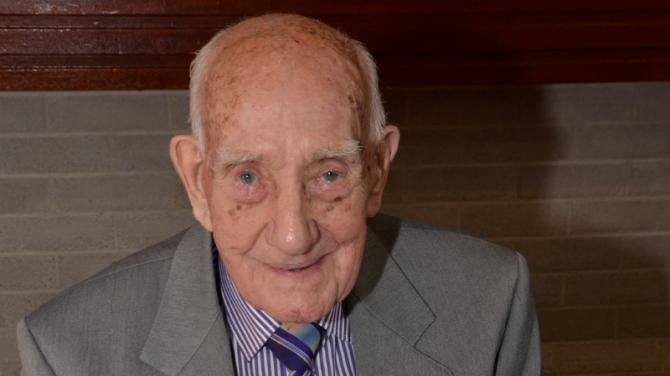 A FOOTBALLING legend and a stalwart of the Laurelvale community has passed away in his 103rd year.

Mr Bertie Wright had been a popular and well known figure in the County Armagh village.

Paying tribute to their former player Glentoran FC said, “We’re deeply saddened to learn of the passing of Bertie Wright.

“An inspiration to many, we[‘re honoured that he was part of our Glentoran family.

“Our thoughts are with everyone who knew and loved him.”

Mr Wright passed away peacefully at hospital on Saturday.

A family death notice stated: “Robert Thomas (Bertie), in his 103rd year, Laurel Heights, Laurelvale, beloved husband of the late Margaret (Peggy), dear father of Paul and the late Dolores, a dear father-in-law and a devoted grandfather, great-grandfather and great-great-grandfather.

“Funeral service in Ahorey Presbyterian Church, on Tuesday at 2.00pm, followed by a private family committal at Mullavilly Parish Churchyard.

“The service can be viewed at Ahorey Presbyterian Church YouTube channel via https://youtube.com/c/AhoreyPresbyterianChurch .

“Lovingly remembered by his son and all the family circle.

Mr Wright was one of the village’s best-known residents.

He had celebrated his 100th birthday in October 2019 when Ahorey Presbyterian Church, of which he was a member, threw a surprise party. Those in attendance included former Moderator of the Presbyterian Church in Ireland, Very Rev Dr Charles McMullen.

Making his way from his Laurel Heights home to the church hall, Bertie – who was still physically active, fully alert mentally and a wholly lucid conversationalist – had no idea of what had been laid on in his honour, so it was quite a ‘do’.

Mr Wright won the All-Ireland Inter City Cup with Glentoran in 1943-44 and was the Glens’ oldest surviving player.

He also played for Portadown FC, as did his brother, the late Freddie Wright.

As well as having achieved fame as a footballer, Bertie is noted as a man of faith, for in addition to Ahorey Presbyterian Church he had been an active member of Laurelvale Mission Hall for many years.