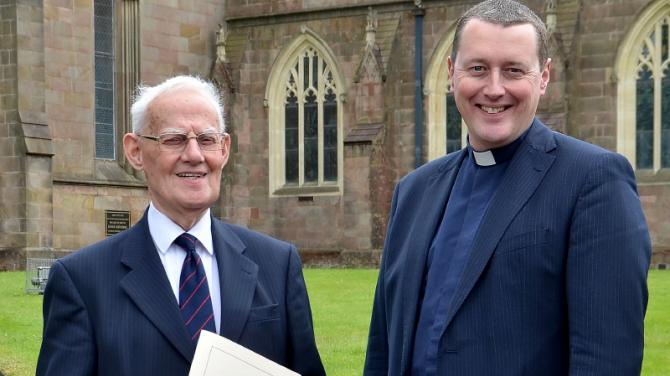 IF you've ever wondered how or why people are proposed as worthy recipients of Maundy money, try this for a yardstick.

“Eric Marshall has served as an effective and meticulous officeholder of the Board of St Patrick’s Cathedral, Armagh, since 2008, as well as being a faithful member of the Cathedral congregation.

“He also gives of his time and skills by volunteering in the 18th century Armagh Robinson Library. Again, he has been doing that since 2008.

“Both areas of his voluntary work are undertaken with commitment and pleasure - and his input is greatly valued by others.”

In talking to the Gazette, that was how a colleague explained Eric Marshall's role and contribution when asked to describe why he had been suggested as a deserving Maundy money recipient.

The quiet modesty and gentle dignity shown by this particular gentleman revealed exactly why he was invited to the 2022 service at St George's Chapel, Windsor Castle.

The formal explanation of how and why this ancient honour comes to be bestowed reads as follows; ‘Recipients of Maundy money are nominated by their local dioceses for contributions to their local church and community’.

So when asked how it made him feel to know that this is how he is viewed by others, his almost-reticent reply was, “I like to work quietly behind the scenes and very much enjoy the work. I don’t feel I am doing anything special.”

But then highlighting what he gets from working as he does, he added, “I really appreciate the friendship and confidence of colleagues on the Cathedral Board, and contacts elsewhere within the Diocese of Armagh.”

Like each of the recipients – 96 women, 96 men - he was made aware of the fact that he was to be a Maundy money awardee when a letter arrived from the Royal Almony Office, Buckingham Palace. Now it’s not every day that sort of correspondence drops into the hallway.

Asked to describe the experience of attending a service like that in such famous and distinguished surroundings as those of Windsor Caste, Eric called it “one of the most memorable events in my life, made all the more so by such an historic venue”.

Given the formality and solemnity of the occasion, and in view of the fact that Prince Charles was deputising for his mother, the Queen, there was a strict protocol rather than any casual air about the proceedings.

The Prince’s words to Eric and each of the other recipients were simply these: “Please receive these with the compliments of Her Majesty the Queen.”

The highlight of the occasion?

“The presentation itself and the privilege of taking part in such an historic Anglican service,” Eric recalled.

And as for what he was going through his mind as all of this was happening amidst the splendour around him, he told the Gazette, “My thoughts were mainly of my late parents. Had it not been for their example and teaching throughout my life, I would never have been there.”

With the population of the UK now almost 68 million and reminded of the fact that his name is now on the comparatively short list of those to have received Maundy money, he was asked if that realisation had sunk in?

He mused, “To be one of 8,232 recipients since 1953 really is something.” And then he added wryly, “I do hope the Queen will have the good health to extend that list and in fact have the occasion of writing to herself with congratulations on her 100th birthday!”

And his response to those here in Armagh who nominated him?

“A very sincere thank you,” he said. “The confidence others have in my work is very encouraging and greatly appreciated.”

He also had a few words of encouragement for others within the Diocese who continue to serve the Church and the local community by virtue of their sometimes unseen – and not always-fully-appreciated – work.

“Keep up your good work; if it's not seen below, it will be above,” he said.

The Very Revd Shane Forster, Dean of Armagh, lauded the Cathedral congregation member's entitlement by saying, “Eric is a most worthy recipient of the Maundy money. A person of gentle but committed Christian faith, devoted to his Church and the service of others.”