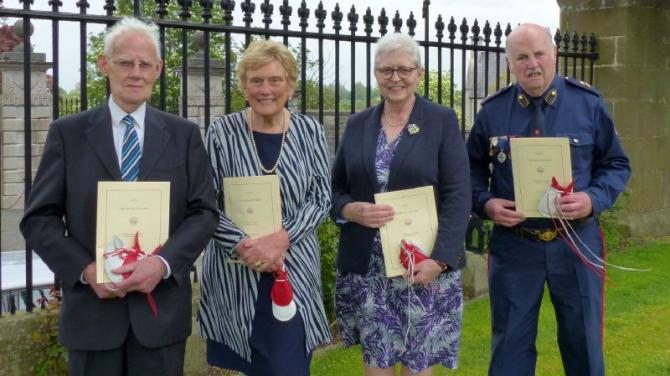 FOUR people from the Diocese of Armagh were among the 96 men and 96 women who received Maundy Money at Windsor Castle.

In view of The Queen's ill-health, the ancient ceremony this year was carried out by Prince Charles.

The Maundy ceremony sees members of the Royal family distribute money and gifts. The service, which dates back to the 13th century, used to involve the sovereign giving money to the poor and washing their feet, thereby recalling the humility of Jesus who washed the feet of his disciples’ at the Last Supper, hours before his crucifixion.

These days there is no foot-washing and recipients are given two purses, one red, one white.

This year the red purse contained a £5 coin and a 50p coin portraying The Queen’s Platinum Jubilee. Historically, this sum of £5.50 is made up of £3 for clothing, £1.50 in lieu of provisions, plus a further £1 representing a piece of the Sovereign’s gown which, before Tudor times, used to be divided between the recipients.

The purses were carried on alms dishes, five of which are normally housed in the Tower of London, by The Queen’s Bodyguard of the Yeomen of the Guard.

Recipients of Maundy money are nominated by their respective dioceses in recognition of outstanding contributions to their local church and community.

The service takes place the day before Good Friday, usually in one of the UK's cathedrals. In 2020 and 2021 however, due to Covid restrictions at the time, this was not possible. Instead the Maundy money was blessed at the Chapel Royal, St James's Palace, before being posted to recipients along with a letter from The Queen.

This meant that although there was no formal service, recipients nevertheless received their Maundy money and purses, enabling them to mark the occasion in the safety of their own homes.

This year, Windsor Castle's famous St George's Chapel was the setting to which the four local recipients travelled, there to join their counterparts from Diocese all over the UK.

The four locals (in alphabetical order): their churches and citations were:

Melvyn Lockhart (St Saviour’s Parish, Dobbin) – service to the Church Lads' and Church Girls' Brigade over many years and in many roles.

Eric Marshall (St Patrick’s Cathedral, Armagh) – service to a number of Diocesan Boards and Parishes as treasurer and committee member.

Kathleen Megaw (1st Presbyterian Church, Armagh) – service to the community through the church, education and the Women’s Institute.

Maureen Reddick (St John’s Parish Church, Middletown) – service to the community through the church and education.

Acknowledging his parishioner Mr Lockhart's entitlement to his nomination and subsequent recognition, Rev Carlton Baxter, Rector of St Aidan’s Kilmore and St Saviour’s The Dobbin told the Gazette, “I would just say well done and thoroughly deserved for Melvyn's life of dedicated service to the Church Lads' and Church Girls' Brigade.

“He is an incredibly Godly man who, for years, has served young people throughout the island of Ireland.”