Willie takes a walk down memory lane with his latest CD 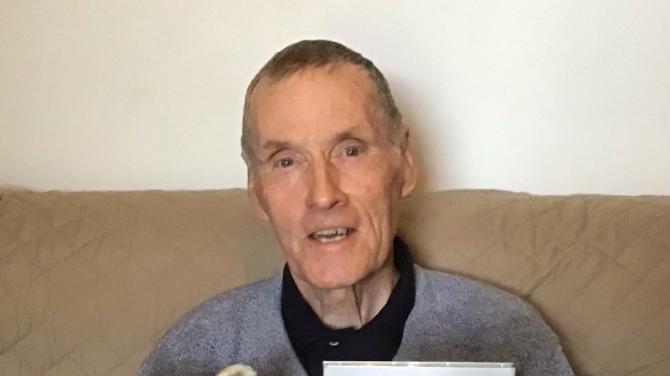 A SONG written by a well-known Armagh charity fundraiser has been released on CD.

Willie Nugent’s latest fundraising CD, entitled ‘The Wee House in Armagh’, is now on sale, with all proceeds in aid of the Royal Belfast Hospital for Sick Children.

This is the fifth CD released by the popular Edward Street man, who over the years has raised over £1million for numerous worthy causes by undertaking various fundraisers.

Poignantly, the painting on the cover of the CD is of Gas Lane in Armagh, many years ago, which was painted by Willie’s late brother, Jimmy, who passed away in April 2017.

Speaking to the Ulster Gazette, Willie recalled how writing the song had taken him on a trip down memory lane.

“My song is not a classic, it’s just a wee trip down memory lane,” he said.

“The song tells the story of someone leaving Armagh in the early 50s to go to America to seek their fortune; he looks back a few times remembering the wee house in Armagh.

“I was born in 1948 so everything he remembers I lived through it as well, so apart from not leaving Armagh and going to America, it was personal.

“Back when I was young, there were lots of great characters about, they never became heroes, they never went into the history books, they were just ordinary people who cared for each other no matter class, colour or creed - just like myself they lived in a wee house in Armagh. When I took this trip down memory lane, I thought of them.

“From day one when I first started fundraising, the one thing I never had any problem with was coming up with fundraising ideas.

“For example, regarding this song, one day I took my dog Maisie out the road for a walk and somewhere along the way I started thinking of the old days. By the time I got back home about two hours later, I had the song, ‘The Wee house in Armagh’, completed in my head. The song is sung by a good friend of mine Larry Hogan, of Dublin Studio Hub.

“This will be my fifth CD. Thankfully over the years with the support and generosity of the people of Armagh and beyond, the first four were sold out in a couple of weeks which meant the charities were the winners.”

The picture of Gas Lane for his CD cover also holds many poignant memories for Willie, who added: “My brother Jimmy, who had an interest in painting, did one of Gas Lane for us many years ago which now hangs proudly in our front room, so I thought what better person to have their painting on the cover of my CD than my brother Jimmy?

“Gas Lane is where I was born. I lived in the last house on the right hand side of the painting. Sadly Gas Lane was demolished in the 1960s.

“One thing I will always remember from my time in Gas Lane are the words of my mother, who said one night as we sat in front of the fire, the room lit up by gaslight - ‘Always remember Willie to respect everyone you meet in life no matter who they are and if you meet someone less fortunate than yourself help them’.

“Little did she know that night in Gas Lane her words would be the stepping stone on my fundraising journey around the world raising over a million for charity.”

The CDs are priced at £2 each and are on sale at the following Armagh outlets - Raffles, Ulster Gazette Shop and Armagh Blooms.

All costs have been paid for by Willie’s family and friends which means every penny raised from the sale of the CDs will be going to ‘The Royal Belfast Hospital for Sick Children’.

l Please note there are only a limited number of CDs available.