Kilcluney march on streets of London at jubilee celebrations 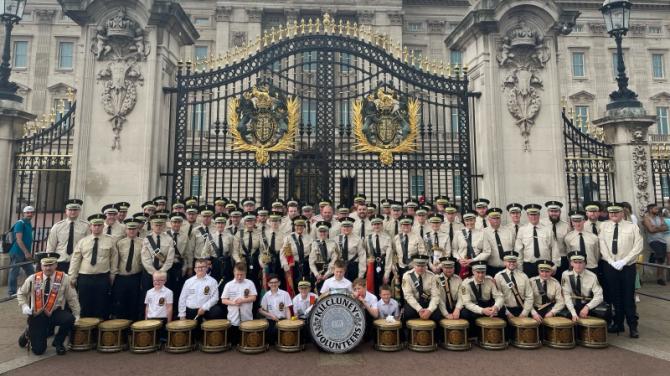 KILCLUNEY Volunteers Flute Band from Markethill have recently returned home from parading through the heart of London to celebrate the Queen’s Platinum Jubilee.

The event, organised by the Grand Orange Lodge of England, saw several thousand members of the Orange Order on parade in the city.

This was the second time the band has paraded in London, following on from their inaugural appearance in the city at the Diamond Jubilee parade in 2012.

Nearly eighty members and supporters of the band set off from Markethill at 4am on Friday 17th June for the celebrations, flying into Heathrow airport and arriving in central London mid-morning.

Band members availed of the chance to explore the city and visit some of the Capital’s iconic sights including the Houses of Parliament, Downing Street, Buckingham Palace, Tower of London, The Shard, London Eye and Trafalgar Square. Others took the opportunity to visit the Imperial War Museum, HMS Belfast, the famous Harrods store and Covent Garden.

Another early start on Saturday, June 18, saw the band travel into London to view the Changing of the Guard at Buckingham Palace, before getting photographed in front of the world famous building.

The sight of a mass of uniformed members certainly caught the attention of inquisitive tourists who had gathered, with many taking photos of members and looking more information on the band.

The band then walked the short distance to Hyde Park Corner, the assembly point for the Platinum Jubilee parade. Commencing at 2pm, the procession made its way through Piccadilly, Pall Mall, Trafalgar Square and Whitehall, culminating in a short rally beside the Victoria Embankment.

A sea of orange descended on the capital and all along the packed route, onlookers showed their appreciation by cheering and applauding the local lads as they went by. With the sound of the Volunteers reverberating through the small streets and tall buildings, the energy and singing of the crowd spurred on the whole band, with many members commenting that it was one of the most atmospheric parades they have ever participated in.

Bands from across England, Northern Ireland and Scotland took part including Regimental Band, Black Skull Corps of Fife and Drums, Corby and Star of Toxteth Concertina.

On Saturday night, the band played at a ticket-only concert in a venue in Croydon, which was a complete sell out. The selection of tunes played by the band received a great response from the crowd, and many spectators took the opportunity to purchase band merchandise.

The band arrived back in Markethill late on Sunday evening. It was a tiring time but all members agreed it was worth every minute and one of the best parades they have ever taken part in.

A spokesperson for the band said, “It was a tremendous occasion and another fantastic experience with the band. Preparations for the trip were long but many great memories have resulted from it. For some of our younger members, it was the first time they have been on an airplane and it was great to give them this opportunity to parade through the streets of London.”

Kilcluney are always seeking dedicated new recruits of all ages. Tuition classes for the flute and drum sections commence at 7.30pm every Monday night at Kilcluney Orange Hall on Mowhan Road. All new members will be given a warm welcome and the band will endeavour to organise transport if required.

For further information on the band and their trip to London, visit the popular Kilcluney page on Facebook and Twitter, which is updated regularly with news, clips and photos.