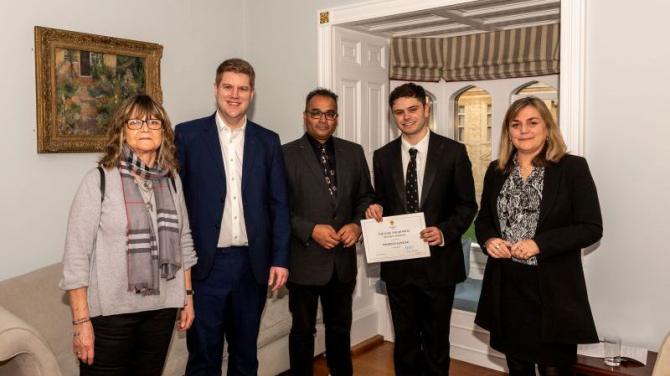 A YOUNG sports journalist from Brazil has expressed his appreciation of a County Armagh native’s endorsement and encouragement in his budding career.

Expressing his delight, via LinkedIn, at having won, Mauricio wrote: “It’s been nearly two weeks since I received the Clive Taylor Prize for sports journalism from the Philip Geddes Trust at St Edmund Hall.

“I am still absolutely thrilled to have been awarded the prize, and had an amazing evening meeting some prominent figures within the journalism industry.

“Thank you to all the Geddes Trustees, and in particular Peter Cardwell for chairing the Trust and Lynne Hedworth for maintaining the legacy of Clive Taylor.”

The victor’s post-awards LinkedIn message continued, “With the presidential election [in Brazil] and the World Cup [in Qatar] coming at the end of this year, I am now looking forward to spending the prize funds on a summer project in Brazil exploring the intersection between politics and football.

“Given the widespread use of the Brazil shirt at [President Jair} Bolsonaro’s demonstrations and the recent comments made by the Governor of São Paulo on Neymar [da Silva Santos Junior of Paris Saint-Germain and Brazil fame], I am sure this summer will be fruitful.”

The awards are named after Philip Geddes who studied at Oxford University’s famous St Edmund Hall from where he emerged as a journalist of considerable promise, for having graduated he joined the staff of the London Evening Standard and then moved to the Daily Express.

In December 1983, while he was browsing in Harrods, an order to evacuate the world-famous Knightsbridge store was issued. Being a story-driven journalist, instinctively the eager 24-year-old went to investigate. Tragically, that innate curiosity cost him his life, for he was killed by an IRA bomb.

As well as a tree and plaque in the gardens of St Edmund Hall commemorating his life, each year since 1984 the Philip Geddes Memorial Prize has been awarded to the Oxford student deemed to be the most promising of those intent on a career in the world of newspapers, television or radio.

Past winners include a number who today are employed by the BBC, ITN, Reuters, The Economist, The Guardian, The Times, The Telegraph and other national newspapers and publications.

Also under the auspices of the Trust, student journalists who specialise in sports writing compete for the prize named after Clive Taylor who was The Sun's noted cricket correspondent from 1964 to 1977.

Peter Cardwell who graduated from St Hugh’s College, Oxford in history and politics, is a past-winner of the Geddes Prize and now-chair of the overarching Trust.

As an undergraduate he also edited ‘The Oxford Student’, and was both the Oxford Union’s chief press officer and President of the Oxford
Media Society.

As well as chairing the PGMT, Peter is now TalkRadio's political editor.