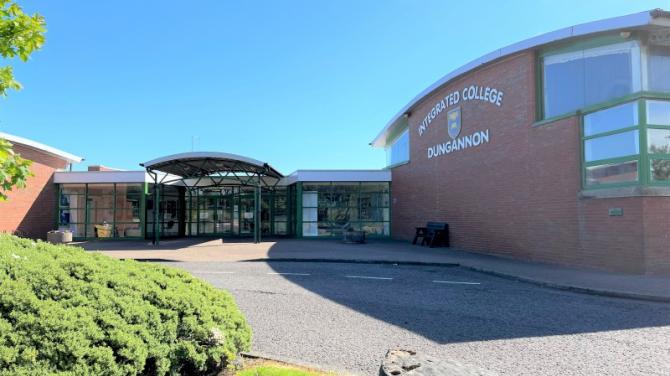 INTEGRATED College Dungannon is to benefit from the provision of a multi-million pound new-build school.

And all at ICD are delighted as confirmation came this week.

The new facilities will be capable of accommodating the over 700 students who have chosen to be educated in an integrated setting.

Principal Andrew Sleeth believes the confirmed new-build is a glowing endorsement, not just of the excellent teaching capabilities of the ICD staff, but of the fast-growing demand for the integrated sector.

It has been quite a journey for the Dungannon-based school - which draws its pupils largely from Counties Tyrone and Armagh - and one which is eventually beginning to show light at the end of the tunnel.

It was on March 23, 2016, that the Northern Ireland Office announced that shared and integrated education in Northern Ireland was set to benefit from the first tranche of half a billion pounds of dedicated UK Government funding allocated under the Stormont House Fresh Start Agreement.

Fast forward over two-and-a-half years and, on November 23, 2018, a second tranche of five projects was announced, which included Integrated College Dungannon.

The primary objective was to deliver a new school for an enrolment of more than 700 students.

McAdam Design Team were appointed as the lead consultant for the Integrated Consultancy Team to take the project from inception to completion.

A business case - giving approval to the option of a new school on the existing school site - was approved in August last year.

In the intervening months, Project Board and Project Team meetings have been continuing to take place regularly and the initial design for the new school is almost complete.

Integrated College Dungannon opened its doors in September 1995, following a fervent campaign by parents who had the vision that children should be educated together without segregation or division. The school was originally situated in mobiles beside Windmill Integrated Primary School before moving to its current location on the Gortmerron Link Road.

In 1995, the initial intake at ICD was 60 students, who were supported by the first Principal, Mr Aidan Dolan, seven teaching staff and three support staff.

The growth has been phenomenal, as today over 700 students attend ICD and are supported by the Principal, Mr Andrew Sleeth, and over 100 staff.

Mr Sleeth is understandably thrilled by developments and the prospect of new accommodation.

He told the Ulster Gazette: “I am delighted that ICD will receive a new-build, which will further support our students and accommodate the demand for integrated education in this area.

“I was privileged to take over the role of Principal, of ICD, in 2006 and am delighted that the college has gone from strength to strength over the years.”

Plaudits such as these are richly deserved and a testament to the ICD quality of education.

Added Mr Sleeth: “Confirmation of a new-build for ICD reaffirms the Department of Education’s support for the growth of the college and we look forward to accommodating integrated education for more students, over the coming years, in our new state-of-the-art college buildings.”