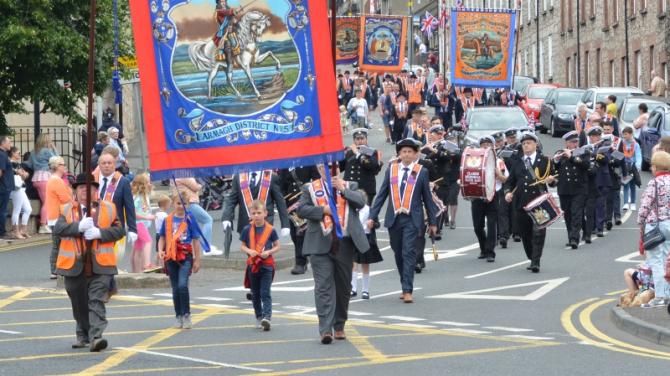 LOCAL Orangemen are gearing up for the Twelfth in Armagh - with the city hosting this year’s main demonstration.

It’s been quite a journey for the leadership of Armagh District LOL No 5, who were in the late stages of preparing to host the celebration in 2020 when the Covid pandemic brought a series of lockdowns and normal life was put on hold.

District Master Roy Pillow said he is looking forward to the celebration, adding, “We had started planning for the Twelfth in Armagh City just after the Twelfth in Tandragee in 2019. Our plans were fairly well advanced in March and then lockdown occurred and that was it for the rest of that year. We have a memorial service every Twelfth morning in the Orange Hall to remember the Orangemen from our district who were murdered during the Troubles, to me that’s the most important part of any Twelfth. That’s all we had in 2020, restricted to 30 members in attendance with social distancing.

“In 2021 for the year sometimes we thought it was on and other times it was off. Every district had a sort of mini-Twelfth, we had ours in Armagh City and it went fairly well. We’re looking forward to having the whole county with us on the Twelfth this year. This is the first Twelfth in three years that the county demonstration has taken place. We’re expecting the 11 districts, comprised of 150 lodges, 67 bends and ladies lodges and junior lodges and visitors from the Republic of Ireland.”

He went on: “I think people are delighted to be out again and we’re expecting a good attendance.”

It will be the biggest Twelfth Demonstration in the country, outstripping even Belfast.

Events planned in the run up to the Twelfth include a Songs of Praise evening to take place in St Mark’s Church, Armagh, on Thursday (June 30).

The service will start at 8pm.

Another highlight in the run up to the Twelfth will be a family fun night (including It’s a Knockout competition) , military tattoo and fireworks display taking place at Armagh Rugby Club on Saturday, July 9 from 7.30pm.

A collection will be taken on the night to raise funds for the Junior Orange Lodge.

It promises to be an entertaining evening with lots for families to enjoy.

Another important occasion will be a Remembrance Service taking place on Sunday (July 1).

The LOL 347 Somme Parade will leave Ballinahonemore Orange Hall at 7.30pm for an Act of Remembrance at Armagh War Memorial.

Local Orangemen will be involved in two church services on Sunday, July 10.

And on Sunday evening the Armagh District Service will take place in Armagh Methodist Church starting at 7pm.

And, of course, the main event will be on Tuesday, July 12, when Orangemen from all over the county (and further afield) will converge on Armagh City for the Twelfth celebration.

The main parade will begin at the Portadown Road at approximately 9.30am parading to the demonstration field on the Hamiltonsbawn Road via the city centre.

It promises to be a day of great music and colour procession as Orangemen celebrate the 332nd anniversary of the Battle of the Boyne.

The day will be broadcast live on GB News and, of course, the Ulster Gazette will be there to provide full coverage of the day.