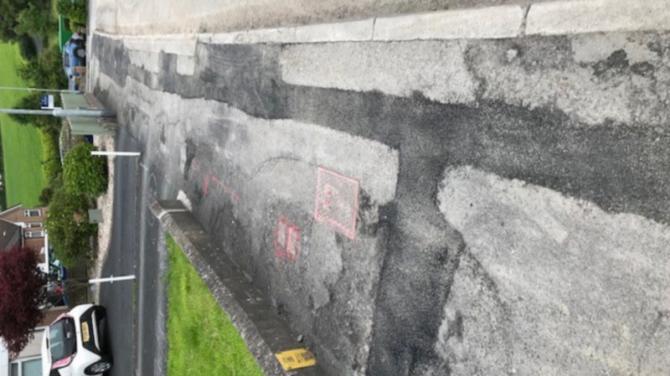 CONCERNS have been raised about the state of the footpaths in Richhill - which have been left like a patchwork quilt as a result of utilities work.

Mr Irwin has spoken with residents in Mossgreen in Richhill to discuss their concerns over what he termed a “patchwork” of repairs left behind following work to install utilities such as broadband.

Mr Irwin said he has raised the concerns with the Minister for Infrastructure to put forward the case for more investment in footpaths to fully repair the uneven surfaces.

He stated, “It is very easy to see why residents in developments across the constituency are so concerned.

“I know that in some areas there are two or three different tracks left in the footpaths following repeated digging by utility companies and this has left footpaths looking absolutely terrible and difficult to walk on as can easily be seen.”

He added, “Some of the paths have been in poor repair for some time and the digging of the pathways on multiple occasions has certainly not improved the surface, rather it has simply made the pathways much worse.”

He continued, “I have conveyed to the Minister that it is absolutely essential that a scheme of path resurfacing is undertaken to ensure that an acceptable surface is restored for pedestrians both in Mossgreen Richhill but also in other areas where utility companies have repeatedly excavated pathways.”

A Department for Infrastructure spokesperson said, “The Department carries out inspection and testing to ensure any utility street works meet the required standards and will investigate complaints received by the public. Given the extent of work by utility companies it would not be reasonable to carry out full width resurfacing on footways following such work.

“With regard to Mossgreen, Richhill, the Department is aware of the concerns of residents here. It is accepted that the recent utility works have had a visual impact on the footways, however, they remain safe and serviceable. The area has been inspected and the reinstatements are to the required standard with the exception of a small number of issues which were raised with the utility companies at a site meeting on 1 June, 2022, which they plan to resolve. The Department will consider the footways at this location, along with other locations in similar or worse condition for inclusion in a future programme of work when the warranty period of 12 months has expired.”