Time to move on after 28 years in 1st Armagh 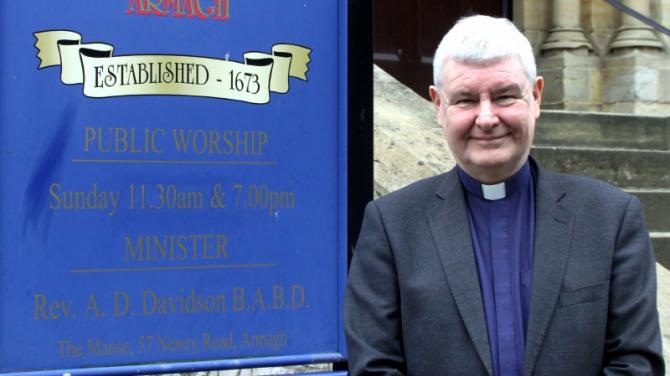 THE minister of 1st Armagh Presbyterian Church, Rev Tony Davidson, is retiring after 28 years in the role.

Having grown up in Dungannon under the ministry of Dr Andrew Rodgers, the first step on his route to Ireland’s ecclesiastical capital was via Stormont Presbyterian Church, where he served as assistant. After that he ministered far south of the border in Christ Church, Limerick.

When he arrived in Armagh in March 1994, the Troubles were still a fact of life. It was a difficult time and environment of sectarian mistrust, suspicion and, in some cases, undisguised hatred.

“There were deaths in my early months,” he recalls. “The ceasefires came in early August. I think for a lot of people in Armagh it was a bit of a shock to discover that peace actually could come after years of really difficult times here.

“Thankfully things are a whole lot better now, though there’s no getting away from the fact that people here had been through very, very difficult times. And, as a result, the 1990s were all about trying to establish that peace. That was difficult, too.”

Asked how he will remember his soon-to-be former congregation here in the Cathedral City he replies, “Where to start? Some of the first babies I baptised here are now serving on the committee of 1st Armagh!”

“I enjoy studying, I enjoy preaching, I enjoy meeting people, so I suppose ministry has suited me. I’ve been very fortunate to have had a job in which I get to do all of those things.”

He laughs as he points out, “Most of the time, people like to show their good side when they’re around clergy, so you do get to see the best! But you also get to see the underside of human nature sometimes,” he hastens to add.

He has fond memories of particularly successful occasions – the 2014 Flower Festival and, three years later, the Christmas Tree Festival, both of which were great cross-community events.

“Giro d'Italia was another huge success; we served bacon butties in the car park and had a special service just after the cyclists had gone through Armagh. That’s another lovely memory of having adapted to what was going on around us and turning that into an outreach opportunity. Talking of outreach, we also had a very good mission in the ’90s.”

Less happy memories include having had to officiate at several high-profile funerals of young people.

“You don't forget those,” he says. “But if there is a plus, it’s that tragic occasions like that sometimes bring the community closer together and show us some of the best of human nature.”

Reflecting on the relationship he has had with those alongside whom he has worked most closely in his 28 years in the pulpit of 1st Armagh he says, “As I leave I’m really thankful to have had a very supportive Kirk Session.

“They’ve been a really good team and they have been very good to me. We have worked well together pastorally – especially in getting through the pandemic when everybody rallied round to keep in touch with others.

“During Covid, suddenly things that we had perhaps taken for granted - when we really ought not to have – were no longer available to us. We couldn’t meet for worship, for example. Now that we’re able to do that again, I think we’re maybe a wee bit more appreciative of it than before.

“That said, we were very fortunate in that we have very good technology and very good people working with it here in 1st Armagh. That enabled us to broadcast widely, so it was like a new stage to ministry. At the time we joked that ministers had become TV evangelists overnight – without the white suits!”

It’s a remark that displays his humour, much of which is refreshingly self-deprecating.

As with its counterparts elsewhere, The Mall-situated church with its distinctive spire – a feature not common place in the usually more understated architecture of Presbyterianism – is gradually rebuilding its in-person attendance numbers in the wake of Covid.

“People got into the habit of watching at home and they can still do that,” he points out. “And over those two years, the mobility of some of our more elderly members got worse, so we aren’t seeing them the way we used to. For those people, live streaming of services is a real asset.

“The pandemic forced us to be creative in a number of ways. Another of 1st Armagh’s major assets is the organ and our very good organist, Elise Crean. So although at one stage we couldn’t sing as a congregation, we were able to listen to her and – thanks to our cameras - watch her playing wonderful voluntaries.

“So we have learned a number of things as a result of all this, prompting us to ask questions: for example, what did we do in the past that we’ve discovered we perhaps don’t actually need to do? But as I’m not staying, I can’t do anything to answer those questions; that’s something for the next person to think about.”

Assessing the state of play in today’s society, he refers to the last 40 years in the life of Moses who led the Hebrews out of enslavement and through the wilderness on their way to the promised land.

His analogy is: “For the generation before me, it was like Egypt in that people were living in the slavery of violence. For my generation it was the wilderness years in which we were going round and round in circles with the peace process.

“That’s still the case in terms of the grumblings and difficulties that go with changed circumstances. However, the wilderness is still better than enslavement.

“The next stage is crossing the Jordan and trying to make a home in the new situation where we find ourselves in an increasingly secular and sometimes adverse society. In each case, the important thing to remember is that God is with us.”

Mr Davidson actually used that same analogy when he addressed last week’s General Assembly of the Presbyterian Church in Ireland.

With 1st Armagh celebrating its 350th anniversary in 2023, he plans to update the history written by his predecessor, Dr Temple Lundy, for the 300th anniversary.

As for what comes next, he says, “In that I enjoy history and writing, that will be a wee project for me. I’m also the Peace and Reconciliation Panel Convenor for the denomination, so I'll have a bit more time to concentrate on that. And with my grandchildren living across the water, I’ll be going over to see a bit more of them.

“I’ll be doing a bit of preaching, too, of course, as retired ministers tend to. And I want to get involved a bit more in the church in Dungannon where I grew up.

Addressing the reality he now faces he says,“You have to be very aware that in withdrawing and handing over to someone else, you must resist any temptation to interfere. Above all, you're trusting in God with regard to your future.”

He concludes our interview by telling me, “It has been lovely to have been part of a community here in Armagh, offering congratulations and condolences at times. I will miss that.”

Rev Davidson’s final service as minister of 1st Armagh will be on Sunday, July 3.