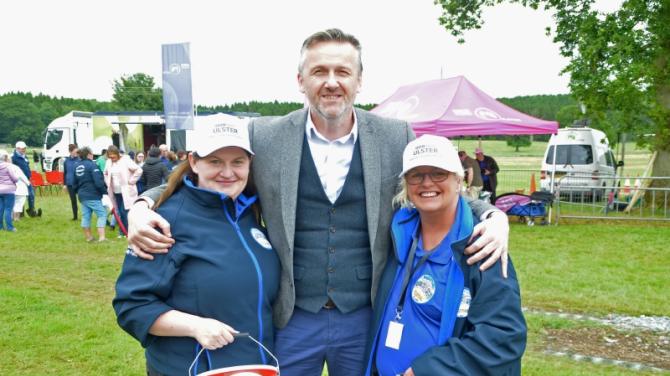 MARKETHILL Community Festival is gearing up for its 45th Anniversary - and had a high profile start last month when the BBC Radio Ulster Roadshow came calling.

BBC personalities Hugo Duncan, Connor Philips and Vinnie Hurrell all came to Gosford Forest Park to present their shows from the launch event.

And later this month the festival will kick into high gear with a series of events in the area - with a Country and Western concert in Gosford Forest Park a key highlight.

Running up to the festival events will include a Go-Karting experience for 11 to 15 year-olds at Gosford Karting on July 18, and on July 20 The Masonic Hall will play host to a ‘Can’t Cook, Won’t Cook’ event.

On July 22 it’s the turn of the older generation to take to the race track with Go-Karting for 16 to 80 year olds at Gosford Karting.

Also on July 22 (and continuing into July 23) there will be an Open Garden at the Community Garden behind the Old Courthouse (10am to 4.30pm).

On July 25 the festival’s official opening parade will see children dress up with a chance of winning prizes and Kevin McAllister from Downtown Radio officially opens the festival, with a host of artists appearing that night so come along with your dancing shoes.

There’s bound to be no end of fun on July 26 with the It’s a Knock-Out competition and barbecue at Markethill High School rugby pitch.

On July 27 a Car Treasure Hunt will leave the Masonic Hall car park, time to be confirmed.

There will be flower arranging in the Masonic Hall on July 28.

July 29 sees one of the key events of the festival with the Country and Western Concert in Gosford Forest Park.

The show starts at 7pm and compere Sean Wallace will introduce a host of stars including Shaun Cuddy, Cathy Durkin and the Barry Doyle Band.

As it is a walk in event this year you are welcome to bring your summer seats. There will be disabled parking in the field but this is on pre-book only as there are a limited spaces available.

Tickets are now on sale in Nisa (Hills) or the Courtrooms Restaurant in Markethill. Also available from committee members or by calling 07749 653 573.

Explaining the background of the festival a spokesperson said, “Robin Dazelle started this event by inviting a few families to come together to raise a few pounds for charity and it has grown over the years and although Robin is now no longer with us his memory lives on in all we do.

“People from all walks of life have attended our festival and they have lasting memories over the years.

“We have a fantastic choice of events this year and hopefully something for everyone.

“We are bringing our communities together while raising funds for Air Ambulance, ABC Autism and RDA Longstone Armagh.

“Gosford karting is definitely great fun for participants and spectators.

“Can't cook, won't cook is sure to be exciting with Alderman Glenn Barr one of the participants.

“Our country music show in Gosford Forest Park will definitely be a great night with a host of stars appearing.

“All our events are family oriented and Markethill community festival are looking forward to welcoming you all to what promises to be a fantastic festival.

“Finally we couldn't possibly run all these events without the support of all our local traders and surrounding businesses in and around the Markethill area and the ABC Council.”