Primary school first to sign up to library campaign 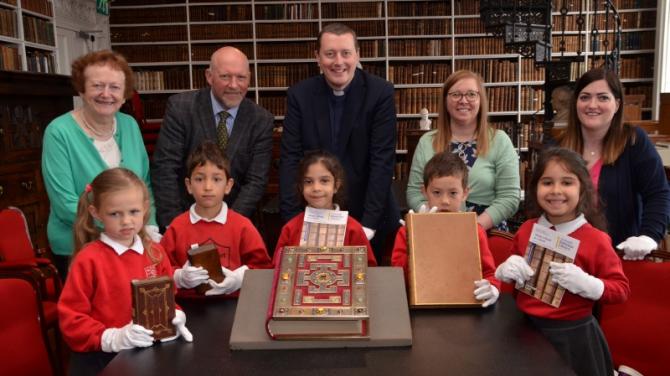 PUPILS from Armagh’s Drelincourt Primary School are getting behind a new book sponsorship campaign launched by the city’s Armagh Robinson Library to help future proof its rare and fascinating collections and inspire new generations of visitors and scholars.

A hidden gem set within the Georgian streets of the city, Armagh Robinson Library was founded in 1771 by Archbishop Richard Robinson, who saw it as embodying the 18th-century spirit of enlightenment, discovery and learning. He wanted his books to be accessible to the public of all classes and creeds for enjoyment, research and inspiration. It’s this tradition and ethos that the current library staff and Governors and Guardians are seeking to protect and are inviting locals and tourists, booklovers, academics, students, schools, families and businesses to take up the opportunity of sponsoring a book, a bespoke selection or a whole shelf.

Armagh Robinson Library has over 40,000 literary gems – from medieval Books of Hours and early editions of the Bible to classic literature, books on science, mathematics, art, music and travel. It’s a truly international collection with works in over eight languages including highly prized texts in Irish. One of the collection stars is Jonathan Swift’s own annotated copy of Gulliver’s Travels, dating from 1726.

The Drelincourt School was founded in 1738 by the widow of Peter Drelincourt, who came from Northern France to make Armagh his home. The infant primary school is sponsoring a 1699 theological book written in French by Peter’s father, Charles Drelincourt and published in Amsterdam.

“The Library is an important cultural asset for the City of Armagh, indeed for the whole of Ireland.  Archbishop Robinson may have founded the Library in the eighteenth century, yet it is up to every generation to sustain it and find new ways to make it relevant in their lives.

“I can think of nothing more fitting than for the children of the Drelincourt School to be the first to support this important scheme to augment Robinson’s endowment.  Book and shelf adoption will allow everyone who visits and appreciates the Library to establish their own personal bond with this special place and ensure that it continues to benefit future generations.”

From £50 to £1,000 and a little extra for some of its ‘star’ books, there are several ‘Adopt-a-Book’ options to choose from. Donations can be made at the Library or online at armaghrobinsonlibrary.co.uk/adopt.