Young Markethill man whose sights are fixed on the big time 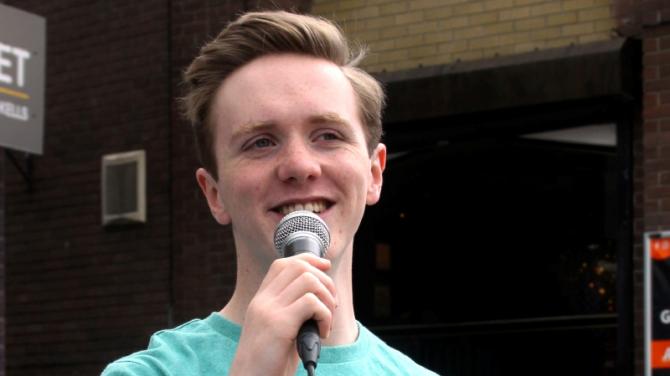 YOUNG Markethill man, Andrew McMurdie, is making quite an impression on the Irish music scene.

Instead his sole (not to be confused with ‘Soul’) focus is on Irish Country & Western music in which he is currently making huge strides.

With all of his previous work having been covers of others’; songs, his first self-written effort – the single, ‘Memories are Pictures’ - has become an almost literal overnight success, witness ringing endorsements from a number of Irish C&W’s best known names, plus airplay on each of the genre’s most supportive radio stations.

Right now he is on the crest of a high metaphorical wave, with ‘live’ dates mounting up and more recording work in the pipeline. And he enjoys the personal contact which he gets when he turns his hand to street busking, as was the case last Thursday in Armagh city centre.

Explaining how his soaring single came to be written, Andrew – an impressively articulate, seemingly fully grounded and remarkably mature young man - told the Gazette, “I actually was texting someone and I just happened to text the words ‘memories are pictures’.

“Within a couple of hours I’d written most of the chorus and one of the verses. I left it for a week or so before going back and writing the last verse. The inspiration for that came when the friend I was talking to sent me a picture of a flowery dress she was thinking of wearing. And if you listen to the end of song you’ll hear the words, ‘You wave goodbye in that divine flowery dress’. That’s really how it came about.”

The song also includes bagpipes - and there’s a story behind that too, as he explained by saying, “When, in the recording studio, I suggested using pipes, my mum laughed at me. She thought it was a ridiculous idea. But once she heard the finished work, she loved it.”

Trade secret? Rather than a human piper, the music is attributable to what Andrew said was the studio technician “working his magic”.

“It’s all down to him having been able to manipulate notes,” he revealed. “It was wonderful to see how he managed to achieve it.”

Although ‘Memories Are Pictures’ is his first song, he is no stranger to public performance; he has been doing that for the past four years. Since taking to the stage at the age of 17, the boards he has trod have included those of Armagh’s Market Place Theatre, The Mourne Country Hotel (Newry) and The Ramble Inn (Antrim) where, thanks to James Mc Garrity, he played with the Barry Doyle Duo.

“I’m over the moon at how things are working out now,” Andrew said. “Covers are fun, but being able to sing your own songs feels entirely different.

“When I appeared in Ballymena and played the new single, I noticed a lady in the audience who was crying. Afterwards I went over to her and asked why. She said it had just brought back so many memories of her husband.

“I didn’t write it from that angle, but that’s what she took from it, so as well as being really nice to hear her interpretation of it, that taught me something important, namely that although everybody is listening to the same lyrics, different people hear different things in those words. They attach their own meaning, and that’s a beautiful thing about music.”

Those alongside whom he has already appeared include Philomena Begley, Susan McCann, Hugo Duncan, Tony Allen and the late Brian Coll. Andrew really values the encouragement, support and words of advice those legendary figures of Irish C&W music have been able and willing to share with him.

He recalled, “I was singing on the same gig as Brian Coll. Hugo was there, too, and before the show we were having a chat. Hugo’s advice was, ‘Andrew, don’t touch the drink’, and Brian said, '’And don’t be gambling’.

“I was on just before Brian, so he was standing in the wings waiting to come on when I’d finished. I sang ‘Make The World Go Away’, and I was leaving the stage as he was coming on. As he passed me he just said, ‘You can hold a note’. That’s a memory I’ll cherish.”

When I mentioned how unexpectedly maturity he was for a 21-year-old, he just replied, “Well, I’ve had to grow up fast.”

He has a number of friends in America – people he has known for coming on 12 years. He talks to them “pretty much on a daily basis”, which perhaps explains why his accent owes as much to Massachusetts, Maine or Minnesota as to his native Markethill.

He laughed as he described a situation in which he once found himself in Newry, where the curiousity-struck locals remarked, ‘Your accent is very exotic; where are you from?'

“And I told them, 'Just up the road in Markethill'!”

Currently he is working on his second album - a compilation of singles he has previously recorded, almost certainly augmented by some of his own songs.

“The response to ‘Memories Are Pictures’ has been so positive that I’m thinking of including several more ‘originals’ on the album,” he said.

“I have about three songs I haven’t yet recorded that I think I’ll maybe put on it,” he said. “My ma [Jacqueline] is a good judge, so if she likes it, I’m pretty sure everybody else will!”

His approach to the idea of recording is another aspect of his personality which is out of step with that of most other 21-year-olds. Older Gazette readers will be aware that record-buying, as many of us remember it having been, has now changed beyond recognition.

“Yes, it’s mostly all downloaded these days,” Andrew agreed. “But I’m quite old-fashioned about this, because I still listen to vinyls and cassettes. And what I have recorded in the past has been on CD – and even that’s out of date now.

“So with this new album, I’m just going to have to release it using an online streaming service like Distrokid who will then distribute it to the likes of Spotify or Amazon Music.”

Asked about his own status at this stage he replied, “I’m totally independent and that’s the way I want it. I don’t have a manager – it’s just me and ma. So it’s trial and error really. There’s a lot of things we did at the start that we now know not to do. But that’s okay, because we have learned things we wouldn't have known otherwise. And if I had a professional manager, I don’t think it would be as much fun.

“But while there are services that can release my music, you still have to cater for people who, like myself, prefer to buy a physical product in a record shop.

“There aren’t too many of those around these days, but there are still a few who sell Irish country music on vinyl, which is great, because ike them, I'm not a fan of USB sticks, either.

Like them, I’m a fan of physical records, whether on vinyl or CD.

“And I’m the same when it comes to reading a book; I want the feel of printed pages in my hands rather than trying to read them on a pad or whatever it’s called.”

Andrew further underlines his love and preference of things past by admitting, “I didn’t even have phone until I started singing at the age of 17! My first gig was at the Queen’s Hall in Newtownards on Friday, June 1, 2018. On the Monday, three days later, I was on with Hugo [Duncan], so since then I’ve had a phone so that I can be contacted - and things have gone from strength to strength.”

Music is his life. There is no day job, so no safety net.

“I sing and that’s what I do because I have no other option.” he said. “And you know what? It’s great because it keeps me focused. There’s no better motivation than knowing there’s nothing else to fall back on.”

This Thursday (July 7) he leaves to fulfill some engagements in England. And already he has dates in Scotland lined up for 2023.

Note the name Andrew McMurdie, for this is a young man with the ambition, determination, motivation and drive to go far.