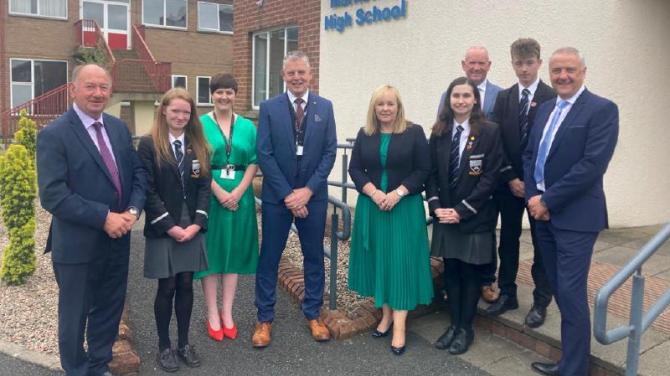 A VISIT by Education Minister Michelle McIlveen gave Markethill High School’s principal and senior members of the Board of Governors an opportunity to restate their case for a new build.

The Minister visited the Mowham Road school on Wednesday, June 22, and she heard a well-made case in favour of that development.

Having opened in 1959, the school has served the community well by providing consistency and stability in tandem with unfailingly high standards of tuition and example throughout the Troubles, in tandem with adapting to a host of on-going changes in the field of education.

The Minister, who was accompanied by party colleague William Irwin, the DUP Assemblyman for Newry and Armagh, met with the principal Mr Colin Berry, vice-principal Mrs Sarah Hargan, and the chairman and vice-chairman of the Board of Governors, Messrs Trevor Lockhart and Garry Mahood respectively.

Speaking after the visit, the principal told the Gazette, “We took the opportunity to discuss the key issues impacting the future of MHS including the urgent need to secure an increase in admission and enrolment numbers - and to advance the case for a new build.”

He added, “We thank Minister McIlveen and her team for taking the time to visit us.”

Mr Irwin described the engagement with the school principal and staff as having been “very useful”.

In praising the school “for its progress and achievements” he went on, “It was good to be able to accompany my friend and colleague Minister Michelle McIlveen on the visit and meet Mr Berry and his very able team.

“It is easy to see why MHS is so successful as an education provider and why it’s held in such high esteem in the wider community. Enrolments continue to be very strong and this certainly bodes well for the school’s bright future.”

He too confirmed, “Discussions also included the aspirations for a new build at the site and there is a general consensus that, given the age of the building, this is an important area of development for the future.”

And he vowed, “I will certainly continue to lobby the Department in that regard,” before adding, “With a new build approved for nearby Tandragee Junior High, it’s good to see investment being delivered in the area.

“All of this combines to assist education provision in the wider locality.”

The Richhill-based MLA ended on an optimistic note by saying, “I look forward to further engagement with the school and the Minister for Education in the weeks ahead and I wish MHS well as it sees a cohort of pupils leave to continue their education at a higher level and preparations begin to welcome a new intake of pupils in September.”