No work and all pay makes councillors mull ploy 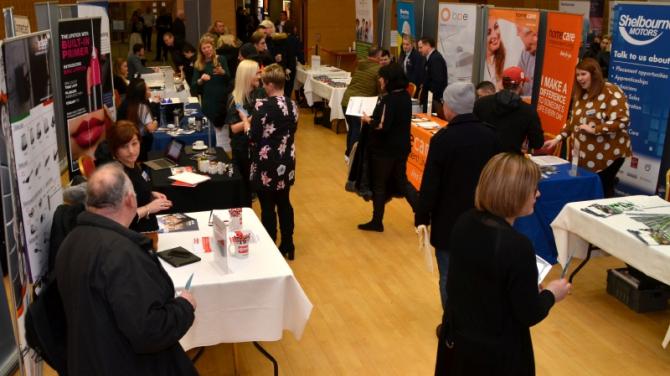 QUESTIONS have been asked over whether or not ABC Council-organised job fairs are offering value for money.

It comes after figures reveal that only six people secured employment when 102 businesses and organisations collectively tried to fill over 670 jobs.

And that was the sum total of three job fairs held in February, March and April.

The figures have come to light during a meeting of Armagh City, Banbridge and Craigavon Borough Council’s economic development committee.

Indeed, they have left some on the committee mulling over whether or not these fairs and the money paid out - when viewed alongside the lack of workers secured - is the correct ploy to employ to help locals find staff.

A total of 166 people attended the first three fairs, staged on the last Tuesday of each month.

According to council’s advance publicity, a total of five back-to-back fairs would be “showcasing a wide range of exciting opportunities on offer across the borough”.

It advised that “hundreds of employers will be coming on board offering over 1,000 jobs and hoping to recruit from the vast pool of local talent across the ABC area”.

Certainly, going by the figures for the first three and the comments from the councillors crunching the numbers, they fall far short of expectations.

A total of 102 employers promoted 674 vacancies. Six of the 166 job-hunters secured their goal which equates to a 3.6 per cent success rate.

That said, a report to committee does highlight how 61 of those who showed up across February, March and April - that’s 37 per cent for statistic lovers - believe the events “helped them on their career journey”.

And 32 of the local employers were also of the opinion that the fairs “helped with their recruitment efforts within this period of time”.

In May, 39 employers were present trying to fill 118 vacancies. There is no indication in the report of how many were filled on this occasion but, of the 60 people who registered to attend, only 29 bothered to show up.

The official report to committtee conceded that, after the first three fairs, a “large number of vacancies remain unfilled”.

But the tone of the document remained unsurprisingly upbeat as it added: “Many local employers we spoke to cite that low unemployment has made the recruitment and retention of staff particularly challenging, and recognise that the current labour market has become extremely competitive and candidate-driven.

“Nonetheless, local employers have advised they have received applications from candidates as a result of the job fairs, increasing their talent pool.”

The unemployment rate for the borough had been described as “extremely low” in May, when details of the first four fairs were being collated; it stood at 2.5 per cent compared to the 3.8 per cent for Northern Ireland as a whole.

It was Ulster Unionist Councillor Kyle Savage who first expressed concern over the numbers.

He acknowledged the current low employment rate in the area, but still felt that the figure of six people gaining employment was very low. He noted that feedback had been obtained from the businesses which attended, but asked if it would be possible to get feedback from the six people who had actually found jobs, to see if they had any suggestions as to how council could do this differently or “do more to help local businesses attract the staff they needed”.

The Ulster Unionist representative explained how he had been contacted by many businesses who could not get the staff they needed and had spoken to a careers teacher who had no idea these jobs fairs even existed.

Councillor Savage said council was “obviously failing in some way” and needed to “do more to fill that employment gap”.

He also referred to the cost of running these events and said this too needed to be taken into account because council “needed to be getting value for money”.

Council’s enterprise development manager agreed that the figures appeared “quite stark”, but said the reality of the situation was that the unemployment rate was “currently very low and was getting lower every month”.

Employers were, therefore, finding it very difficult to hold onto their existing staff because the labour market was so competitive, while they were also finding it very hard to recruit new staff.

The SDLP’s Councillor Thomas O’Hanlon did not mince his words when he said the six sole vacancies filled was “a damning indictment of the process”.

He acknowledged that council officers were doing their best, but suggested they really needed to look at this process again and “ask themselves what else they could do”.

The SDLP man also questioned whether or not the jobs fairs were “proving to be value for money”, saying he too would be keen to see these cost details.

Whilst accepting the positive feedback from some of the employers, Councillor O’Hanon said he would be keen to look at what else council could do to help support the recruitment process.

While he appreciated this was a novel idea, again he remarked that a 3.6% success rate was “not good in any sphere”.

Councillor O’Hanlon also pointed out that, while approximately a third of the participating employers had said that the job fairs had been helpful with their recruitment process, this still meant approximately two thirds of employers had not found the process helpful.

He therefore suggested it would be useful to obtain feedback from them.

The Keady-based councillor said he would be keen to see what lessons had been learned from this and what they could do differently to be able to “put in place a revised scheme or revised support for employers in the borough”, adding that it was a “very difficult market out there” for them at the moment and he wanted to see council do anything it could to assist.

Council officials have now suggested they could bring forward a planned autumn jobs fair, which is to be funded by the Department for Communities and Labour Market Partnership. To stage such an event in October was being considered by some as too late for young people getting exam results in August and deciding what to do next, if they were leaving education and going down the vocational route.