Duvet have to do that here? 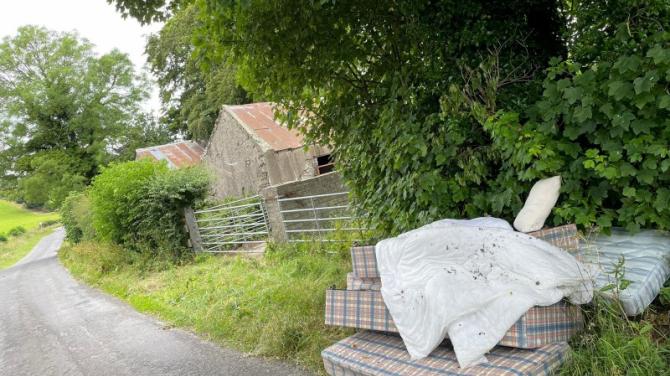 APPEALS have gone out for fly-tippers to stop and think of their actions after a van-load of mattresses and beds were dumped casually by the side of a rural Co Armagh road.

Armagh City, Banbridge and Craigavon Borough Council has confirmed that its officers are investigating the incident, which happened at Poyntzpass.

It had been widely reported that the number of incidents of such illegal dumping had spiked during the Covid-19 pandemic.

While far from acceptable behaviour, the necessary closure of recycling centres during lockdown was one of the reasons being attributed to the surge.

However, a step return to normality had appeared to see a tapering off in incidents of this scale over recent times.

That is, it would seem, until now.

This picture shows the scene at the junction of the Demoan Road and Tullynacross Road.

No less than three matresses, bed bases and bedding - blankets, duvets and pillows - were discarded.

It is evident that a van or car with trailer would have been required to deliver such a heavy and cumbersome load.

But what is not evident is the mindset of those who engage in such activities when there are facilities available to bring such items for a safer and environmentally friendly disposal.

Indeed, it beggars belief, according to local Alderman Gareth Wilson.

The DUP representative had been alerted to this latest episode on Tuesday morning.

A constituent - en route to meet with Alderman Wilson for help with form-filling - spotted the unsightly mess and stopped to take this picture to highlight what had happened.

And the local representative was quickly on the phone to alert the relevant officials.

Alderman Wilson told the Ulster Gazette: “This is yet another ridiculous incident whereby someone has felt the need to dump household material at the roadside.

“This is very frustrating from a council perspective, especially given that council operates fully-staffed recycle centres across the borough for use by anyone who has this type of waste to dispose of.”

It is, sadly, typical behaviour for some and the DUP man believes people need to think again about their actions.

It is not, he assures, confined to certain areas; he has even had fly-tipping happening on his own property!

“You are always getting incidents,” added Alderman Wilson.

“Like tyres. It’s usually stuff like that, big and bulky and people can’t be bothered going the whole hog.

“We have a wee field down the road, there’s a bit of a steep bank.

“We went down one day and there was about six interior doors dumped in it.

“Then another day we went down and someone had actually had loads of glass bottles, like wine bottles.

“They went to the bother of putting them into one of those bags for life and then just hurled them down the bank, instead of just going and putting them in the recycling bin.

“It’s the ‘this is ridiculous’ type of standpoint I come at it from and report it to environmental health, because they will come out and investigate and try and see if there’s any details in it.

“Sometimes people will dump stuff and there could even be a few letters in it. Environmental health just goes straight to that address and goes ‘is this yours?’.”

Judging by the pictures given to himself, he says it appears that someone has “just turfed out the spare room”.

And he is asking that anyone who has information on this - or other incidents of fly-tipping - do their bit by sharing what they know with those best placed to investigate.

“It is unacceptable that this has occurred and I have reported the matter to the environmental health department to investigate,” said Alderman Wilson.

“I would urge people to desist from carrying out what is an enforceable offence by dumping waste.”

Armagh City, Banbridge and Craigavon Borough Council was contacted for a response.

At the time of going to press, no response had been received.