There is a solicitor called Jerry, Running counties from Armagh to Kerry, On 20k a day, Your help on his way, Would be the cake and proverbial cherry! 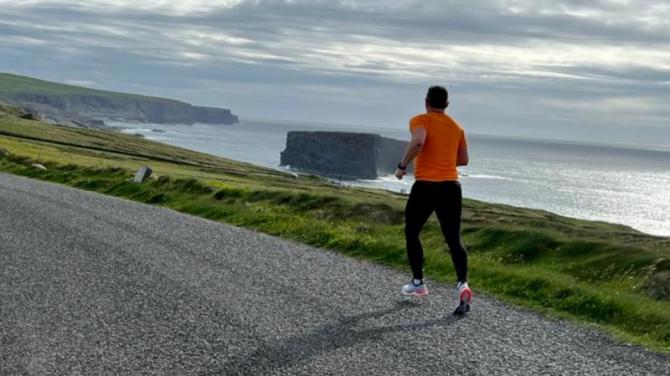 A LIMERICK man will be Armagh-bound this weekend as he completes a 32-county challenge in memory of his father, who passed away from Motor Neurone Disease.

Jerry Twomey is aiming to run 10k in each county in Ireland, north and south, to give back and help others afflicted by this debilitating disease.

And the Limerick solicitor, who is a partner in his family-owned legal practice, is appealing for locals to suggest where he might run in Armagh.

Beginning in Waterford on the first day of July, he will run 10k in each county - sometimes twice a day - with a few rest days thrown in in between.

And, all being well, he will complete his challenge in his native Limerick on July 31.

It will be this coming Sunday, July 17, that Jerry will arrive in Armagh.

And he would be delighted if local runners, clubs or social groups - and anyone with family or friends affected by Motor Neurone Disease - would come out and join him. In fact, two feet - or two wheels for any interested cyclists - it really is the more the merrier!

Jerry told the Ulster Gazette he did not know where he would be running in Armagh, only that it would begin at 4pm on Sunday.

And the reason for the late afternoon outing is that he hopes to fit in his 10k for County Down in the morning time, with a 10.30am start on the cards.

Said Jerry: “In the short-term I’m open to suggestions about where to run. I’ll travel anywhere and meet anyone who has Motor Neurone Disease.

“The logistics haven’t been micro-managed - I’m just sending that out that I’ll run anywhere.

“I’d welcome hearing from running clubs or athletics clubs in the Armagh area. They might be out running anyway so would love them to join me.

“The company makes the journey feel half as long and twice as easy.”

Jerry - who clocked up close to 500 miles in training - has already raised thousands of pounds from previous fundraising endeavours for the Irish Motor Neurone Disease Association.

This has seen him undertake both walking and running challenges.

And it is the memory of his late father John - and the care and support which the charity afforded the family - which inspired Jerry and has driven him on.

And son Jerry decided to set himself a challenge to mark his Dad’s birthday this year.

“The run is to honour Dad but, more importantly, to raise awareness and much-needed funds for Motor Neurone Disease,” explained the father-of-three.

“We met angels and helpers in many forms while Dad suffered his illness with dignity.

“The Irish Motor Neurone Disease Association was of immeasurable support to us and are an endlessly worthy charity to go the distance for.

“I have been training hard since January and at times I felt that completing this challenge is way beyond me.

“What better way to honour the memory of my brilliant Dad than to face a challenge bigger than I feel possible?

“I also wanted to do something in every county in Ireland in support of everyone who is - or has been - affected by this devastating disease.”

Jerry is really looking forward to pounding the streets of Armagh, and the Limerick man expressed his disappointment for the Orchard County’s recent quarter-final All-Ireland exit.

But he is quick to acknowledge the Armagh supporters as “probably the best fans in Ireland”.

He hopes, therefore, that some of that now-famous orange and white support can be shown to himself and the worthy cause which is pushing him onwards and upwards.

“I would be delighted to hook up and run with people wherever they are,” said Jerry. “Just get in touch and I will do my best to be there.”

l To donate to the IMNDA please visit www.idonate.ie/RunForJohn