Off to the USA with a message of peace 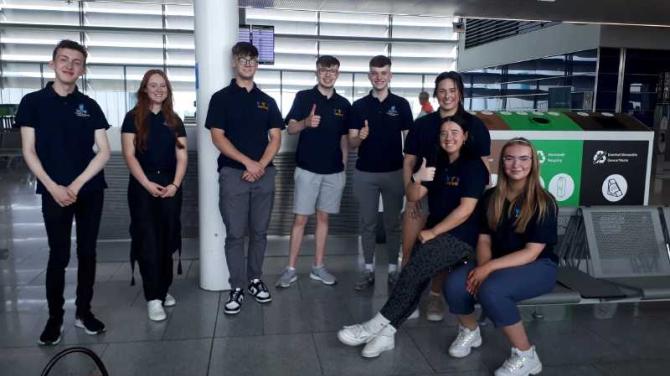 A KILLYLEA teenager currently is in the United States as part of an international gathering of young people whose lives have been affected by war, terrorism or civil unrest.

She is 18-years-old Zara McAnerney whose uncle, Terence McKeever, was murdered on June 16, 1984.

The 30-year-old Dublin-based Armagh man was an electrical contractor who had married just a short time before his murder at the hands of the Provisional IRA.

He had a number of contracts throughout Ireland, north and south. They included work in the South Armagh area.

He was found dead at Mullaghduff Bridge, Cullyhanna, close to the border. The IRA claimed he had been warned “to discontinue electrical engineering work for the security forces”.

As was his norm, he had left his Dublin home at 6:30 that June morning to travel to the McKeever family’s Armagh-based business which he had taken over when his father retired four years earlier.

The RUC and Gardaí were notified when Terence failed to arrive for work that morning. But after receiving an anonymous telephone call about a shooting, it was a priest in south Armagh who discovered the missing man’s body. He had been shot twice in the head and once in the neck.

A booby-trap bomb, found close to his corpse, was defused by the army.

The dead man’s sister, Mrs Karen McAnerney (nee McKeever) recalled, “Terence had a great work ethic and lived for his family and the family business.

“He was also very into motor racing and football and truly was somebody who would never have harmed another human being. Instead he’d have gone out of his way to help others.

“Terence was struck down in the prime of his life and left behind a young wife he’d wed a short time before his murder.”

South East Fermanagh Foundation’s (SEFF) Director of Services, Kenny Donaldson, told the Gazette, “In the past 11 years, we have supported 23 young people in taking part in Project Common Bond. And many of them have gone on to become agents of change in various parts of the world.

“This year we have four participants taking part and they have been joined by four other young people who are representing the Mid Ulster Victims Empowerment (MUVE) group based in Cookstown.”

The link was first established 11 years ago through ‘Tuesday’s Children’. Since then, SEFF have attended annually.

Mr Donaldson explained, “The whole idea followed 9/11 and the attack on the Twin Towers. This year there are 20 nations represented, each of them having been affected by war, terrorism or civil unrest. So that’s upwards of 90 young people in attendance.

“As well as America and some of the African nations, there are young people from Norway, France, Israel and Palestine.”

He continued, “I have no doubt whatsoever that SEFF’s four young people and those attending via the MUVE Project in Cookstown will do their families, our two groups and the community proud in representing us as ambassadors.

“It’s a wonderful opportunity for them to engage with other young people from across the world whose families, like theirs, have been ravaged by the effects of war, terrorism or other civil strife.

“As well as being able to contribute a key insight for others into the transgenerational impacts of violence, our young people will, in turn, be humbled by the primary experiences of others who in recent year have been bereaved of parents and or siblings.”

Enlarging on the work of SEFF, its Director of Services described it as being “an outward facing organisation that sees merit in joining forces with all who subscribe to a values system that regards the use of violence in the furtherance - or defence - of a political objective as wrong and unjustified.”

SEFF’s famous quilt, made up of patches relating to the Troubles, has been key in the group’s work over the years. He gave the Gazette this insight as to its impact.

“A few years ago we brought it to St Mary’s University College on the Falls Road in Belfast and afterwards there were two young women looking at the quilt,” he said.

“One of them began to cry. When I said, 'What’s wrong?' she told me, 'I don't understand what’s going on here. You’ve got Gaelic symbols, you’ve got Orange symbols, you’ve got security forces symbols and you've got Irish dancing shoes – all on the one piece of fabric. What’s that all about?'

“I said nothing and then, about 45 seconds later, she said, ‘I get it; they’re all innocent, aren’t they?' So there’s a power in those symbols that you wouldn’t get across in a book – especially to young people. But the visual impact of seeing them all knitting together – that gets it across.”

He continued, “So this week our young people will seek to educate others as to the continued challenges we face in Northern Ireland through the on-going glorification of terrorism/violence, the lack of meaningful integration of our society and the continuing failure to adequately address our past through a transparent, fair and justice-centred approach.”

He ended by saying, “Seven of the eight young people involved on this occasion are from Northern Ireland. The eighth, Demi, is from England but her granddad - Thomas Agar of the Royal Regiment of Fusiliers - was murdered in Co Fermanagh.” (May 18, 1984).