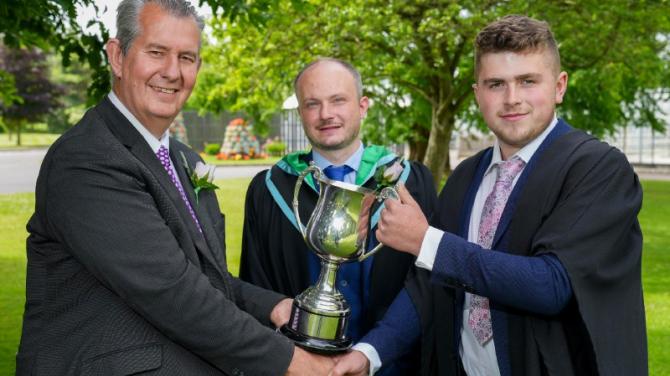 A NUMBER of local students were present recently to reap the rewards of their hard work and efforts as Greenmount Campus of the College of Agriculture, Food and Rural Enterprise (CAFRE) gathered for a graduation ceremony to celebrate achievements.

Greenmount has a long history of serving the Northern Ireland Agri-Food Industry in producing high calibre agriculture graduates. Invited guests, proud families and friends joined together as this tradition continued, celebrating the Class of 2022.

In his address to the students, Manus McHenry was especially pleased to congratulate the first group of students to graduate with a BSc (Hons) Degree in Sustainable Agriculture, validated by Ulster University. This degree launched in 2021, with 32 students enrolling in first year and 18 students enrolling in final year having completing Foundation Degree studies. Dearbhle Mc Laughlin and Nicola Mitchell were congratulated on achieving First Class Honours!

Mr McHenry also welcomed the BSc (Hons) Degree in Agricultural Technology students. This course is a Queen’s University Honours Degree delivered in partnership with CAFRE. With 35 students completing their degree this year CAFRE were delighted that most of the class attended to celebrate the two years of their studies undertaken at Greenmount Campus.

At the ceremony 35 poultry business owners were recognised having successfully completed the Level 3 Work-based Diploma in Agriculture - Poultry Production.

After the ceremony guests enjoyed the sunshine in the glorious Greenmount gardens where ice-cream, produced by CAFRE’s food students was served.