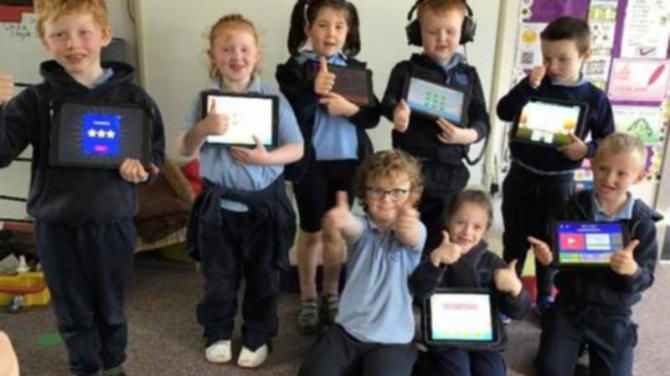 THE numbers are adding up at Kingsmills Primary, with the schools foundation level class having come first in the Splashlearn, Springboard maths competition.

The competition, which saw the foundation level class at Kingsmills primary school win out over 22,000 other schools throughout the UK, is an annual maths challenge that turns maths practice into a fun team building exercise that any Primary school class throughout the country can participate in.

In the challenge that lasted over 10-weeks the pupils in the foundation level class at Kingsmills primary banded together to solve puzzling mathematical conundrums and equations to eventually climb to the top of the leader board at a regional (Northern Ireland Level) as well as second at a national (UK level).

This has resulted in them becoming the proud recipients of a number of Amazon gift vouchers as a reward for their astounding arithmetical athleticism, with the vouchers in question being spent on toys and rewards for the children to enjoy playing with over the summer period.

“The children were absolutely delighted; they have really done well. Ollie is delighted and he is super proud of himself for what it is he has achieved. For winning the competition the children got all got prizes and it was like Christmas morning. He got a big crane that he has to build up as a reward and he is just delighted with it .

“This is such an achievement for the foundation level class. They are only aged four to five so it very impressive that they came first in the Splashlearn Springboard maths competition throughout Northern Ireland and then second throughout the whole of the UK out of 22,000 schools. It is really mind-blowing.”