'Resist attempts to rewrite the past', says Royal Black leader 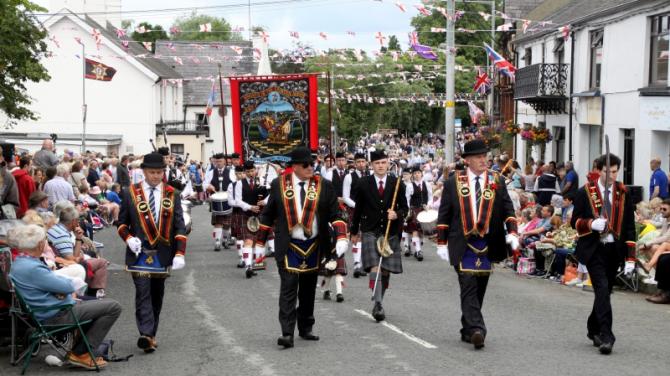 THE leader of the Royal Black Institution spoke at this year’s annual Sham Fight in Scarva on the need for resistance to attempts to rewrite the past, saying “we owe it to the next generation”.

Speaking on the platform at this year’s Thirteenth demonstration, Sovereign Grand Master Rev William Anderson said an event such as the annual July 13 gathering was “an opportunity to reflect on the past, to examine the present and look forward with hope for the future”.

Rev Anderson said it was a time to remember those who had paid the supreme sacrifice in two world wars, conflicts and acts of terrorism “in the defence of freedom and in the pursuit of peace”.

He said it was “a peace that is being subverted and altered today by those with a political agenda”, adding: “We must resist such attempts to rewrite the past and ensure that the true legacy of our past is taught to the children of today.”

Quoting the author George Orwell, he said: “The most effective way to destroy people is to deny and obliterate their understanding of their history.”

Rev Anderson added: “We simply must not allow that to happen here in our beloved part of the United Kingdom.

“We all have our part to play in ensuring that the correct story of our past is kept alive. We owe it to the next generation.”

He said it was “a very confusing world, a world that considers that it needs to rewrite the truths and unshakeable facts that have stood the test of time”.

Rev Anderson said Scripture “reminds us where our hope should lie - I trust that we will all be found building our future in Christ Alone”.

He added: “Today, may I encourage you all to be proud of your past, to live in the present, content with your life as you share it with others, and to be confident of your future.”

Earlier, the sovereign grand master told the gathering that 2022 was “a special year”.

“We have been able to return to Scarva in our thousands, as we have done before the world-wide pandemic prevented us from doing so over the past two years. It is good to be back!”

Tens of thousands of spectators returned to the village of Scarva for the first time in three years for the annual Sham Fight and Royal Black Institution parade, which had not been held since 2019, due to the Covid pandemic.

King Billy yet again claimed victory at the annual Sham Fight, which is held to mark the victory of King William over King James in the 1690 battle of the Boyne.