Fab four cycle from Mizen to Malin Head for hospice 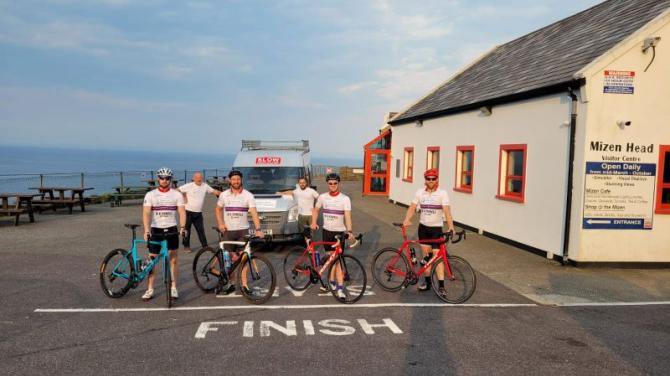 FOUR men from the Armagh/Tassagh area have just completed a 404 miles (650km) cycle from Mizen Head to Malin Head, the most southern and northern points in Ireland respectively.

Originally it was to have been a five-man group, but Michael Rolston had to withdraw after breaking two bones in his hand following a training accident during preparation for the length-of-the-island trek.

As a result, he was forced to pull out two weeks before his four colleagues headed south to deepest Co Cork from where they began the long haul north last Tuesday. They completed it on Saturday, having averaged between 80 and 90 miles per day.

Michael's exit left his brother James, Gareth McNiece, and siblings Kyle and Neil Faloon to make the trip on which they were supported every inch of the way by the two-man service team, Sam McNiece - who is Gareth's father - and the redoubtable Dean Maxwell.

The mini-bus – which normally is used by the church's youth group - was supplied by Aghavilly Parish.

Mercifully Ireland's western-most counties were spared the record-shattering temperatures with which people in England and Wales found themselves having to contend last week.

Speaking to the Gazette on Wednesday evening, Neil said, “Weather-wise it hasn't been too bad in the past couple of days, thankfully, although we got soaked this morning between Newcastle West [Co Limerick],and Shannon Ferry. Generally, though, it's been okay.”

Explaining their location he continued, “We got the ferry from Tarbert to Killimur and right now we're sitting just north of Galway. Tomorrow we'll be heading for Sligo.”

Obviously all of this involved overnight accommodation and asked what that had entailed, Neil replied, “AirBnBs, B&Bs and one night in a hotel – just whatever was available at a price we could afford since we're paying for all the overnights ourselves. The whole thing is self-funded, so that any money we raise goes to the hospice.”

When, in passing, they were asked if they were members of a cycle club, the unexpected reply was, “No – we're just four average Joes who enjoy cycling!”

Less surprising was the fact that they enjoyed support in the form of tangible backing from their local community. Five companies – S.D. Mullan, W.K. Powell & Sons, MCS Electrical Contractors, S.L. McNeice Building Contractors and MW Farms – came forward with generous sponsorship which covered the costs of the cyclists’ needs for five days and four nights on the road.

The riders only decided to undertake the challenge as recently as two months ago. Neil explained, “Like I said, we're just a couple of guys who enjoy cycling together.

“So why did we choose to do this? Well, there’s an awful lot of people – ourselves included – whose families have been helped by the Southern Area Hospice’s work over the years.

“In fairness, we could probably have chosen any one of 10 other different charities which do great work, too, but when all was said and done we felt the hospice was the one that was closest to us.

“They rely on public donations, so we decided to try to raise some money to help them continue with the invaluable support and care they provide to individuals and families suffering from cancer, multiple sclerosis and motor neurone disease.”

Before setting off, Neil had said, “The hospice helps so many families in our area that it just feels right to be taking on what we know is going to be a difficult challenge.

“It's just about giving something back. Any amount - big or small - you can donate would be greatly appreciated, both by us and the charity.”

Even before setting out from Mizen Head, the cyclists had managed to raise just short of £6,500.

And as they headed north, they found people in the Republic to be warm-hearted and generous upon learning what the Co Armagh men were doing, and why. By Wednesday evening, the figure had risen to almost £9,500.

“People have been really generous,” Neil confirmed. “We stopped yesterday for lunch in a small village and because the support van has stickers on it advertising what we're doing, in less than half-an-hour we were given about 70 Euro. And we've also discovered that our wonderful serviceman, Dean [Maxwell], is excellent on the microphone!

“The kindness we’ve experienced has been tremendousand we really appreciate that.”