The busiest ever June since Armagh Foodbank opened 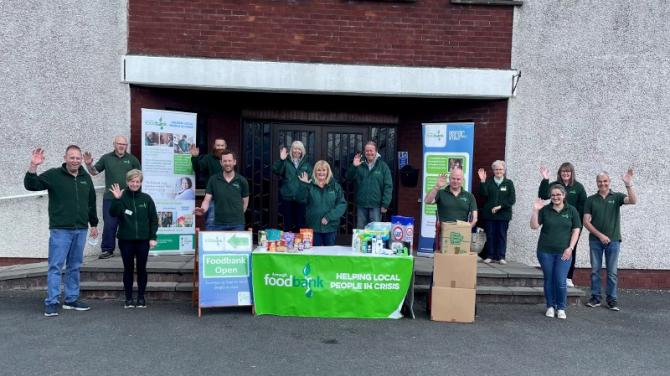 THE project manager of Armagh Foodbank fears “things are going to get a lot worse unless the Government is able to do something”.

With a school uniform pop-up shop scheduled to open in The Mall on August 11, 12 and 13, that is proof that the foodbank’s help now goes beyond issuing tins of beans, packets of pasta and cartons of long-life milk.

Speaking to the Gazette last Thursday, Richard Thompson said, “They [the Government] are going to have to try to ease the burden in some shape or form before the winter sets in, because that’s when people are really going to struggle.

“Many are struggling now as it is – and that’s at a time of year when we don’t need to turn the heating on, so it’s only going to get harder.”

Then pointing to some of the problems created by the pandemic, he added, “A lot of people have had mental health issues because of Covid and some have ended up in places where they wouldn’t have been, but for that.”

Asked if there has been any additional pressure on the foodbank as a result of the non-availability of free school meals during the summer holidays, he said, “While it might be a factor, the major problem is the increasing cost of living in general.

“We saw a big increase in demand for our help in June, which normally would be one of our quietest months. This year, though, it was as almost as busy as December.

“There’s nothing specific relating to the schools being off; an increasing number of people are just struggling to cope in general. A lot are trying to deal with a variety of issues and problems.

“But we’re not hearing people telling us, ‘I’m struggling because the kids are off school’. Nobody is highlighting that particular scenario.”

Credit for that goes to Northern Ireland Education Minister Michelle McIlveen who in June announced a £12.6m summer holiday food grant to offset that problem.

That grant aid began on July 1 and runs until August 31, providing financial assistance to families whose children – at the end of June past – were entitled to a free school meal during term time. Currently those families are receiving £13.50 per week for each entitled child.

“That is why I am allocating £12.6million funding to provide the families of children entitled to free school meals with additional financial support over the summer holidays.”

While that is very welcome, the real concern is what may be coming down the line later this year.

Looking ahead to the autumn, Armagh Foodbank project manager forecast, “That’s when people are going to have to start heating their homes, and that’s not going to be easy.”

Highlighting the changing pattern he and his team of 30 volunteers are witnessing he continued, “In the past, whereas we might have seen somebody coming in once and then not seeing them again for maybe another six-eight months, now they’re coming back a lot sooner because they’re in need of support.

“And then there are others you’d never have seen at all in the past. On Tuesday there was a young woman who came in. Now, normally a person might sit down, have a cup of tea and maybe have a chat. But this woman just wanted to get in and out again as quickly as possible, because it was obvious she was really embarrassed at having to use a foodbank.”

From March 2021 to March 2022, the Armagh operation fed 1,600 people, with October-December having been the busiest quarter.

From April-June 2022, some 500 people were fed – a huge increase in foodbank dependency, reflected in a steadily upward trajectory on the year-on-year graphs.

“April-June is meant to be the quiet time,” Richard mused.

Lauding the generosity of local people, he went on, “During Covid and around Christmas the level of donations was amazing. But we’ve started to see a decrease; there’s less coming through the door now.”

Asked to what he attributed that he ventured, “I think some people who have donated in the past are maybe starting to feel the effects of inflation themselves now. While that’s totally understandable, it’s also a wee bit worrying.”

Foodbanks assist one another, witnessed by the fact that when Armagh’s stocks of pasta ran low, its sister-branch in Craigavon came to the rescue with donations from its then-plentiful supply. And such co-operation may be required in the coming months, for Richard admitted, “Some of our stock is getting lower.”

Asked what he needs to see coming in to meet the increasing demand, he replied, “Tinned meat, tinned fish, orange, UHT milk, tea, coffee and sugar.”

As well as items being handed in physically, he was keen to stress, “Cheques, cash donations or on-line giving via our website mean we’re able to do an on-line shop for basics which are then delivered to us.

“And there are forms on our website where contributors can set up standing orders.”

There are a number of physical collection points for food donations in Armagh: Sainsbury’s and Emerson’s supermarkets; the Rural Transport office; Ulster Bank.

And the project manager’s advice to would-be donors was, “If you want to donate actual food rather than money, try to get in the habit of just putting a few extra items in your basket or trolley and then leaving those off wherever’s handy for you.”

Donations also can be left off at the foodbank [Armagh Elim Church, Drummanmore Road, BT61 8RN] on Tuesday and Saturday mornings [10.30am – 12.30pm].

He ended by saying, “We’re a Christian organisation, so we believe that God will provide in some shape of form. But that doesn't mean we don't have to do our bit in helping to bring that about.”

When I suggested, “Down to people rolling their sleeves up rather than manna on The Mall, then?” he laughed before replying, “No, we have to help in whatever way we can. We just can’t sit on our backsides and watch when others are struggling.”