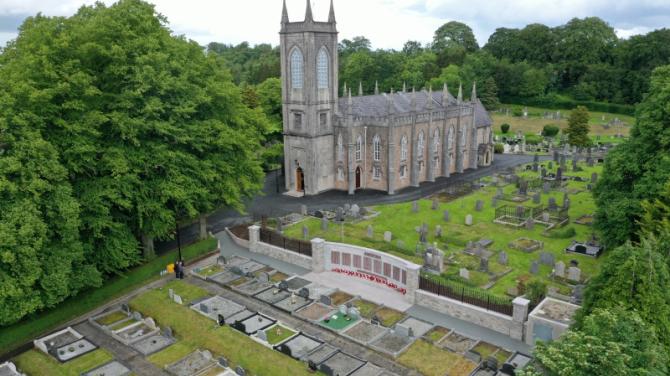 THE County Armagh Phoenix Group is to hold its first annual service to remember members of the Security Forces killed in the area during the Troubles.

The service will take place in St Mark’s Church, Armagh, on Sunday, July 31, at 3pm.

Organised by the Co. Armagh Phoenix Group (CAPG) the service will remember all the names of those members of the Security Forces killed in Co Armagh through terrorism.

The idea of a memorial wall has been floated for some years, when the County Armagh Phoenix Group was formed.

It supports ex security forces victims and survivors of the Troubles who are members of its member organisations.

It took some time to finalise the plans with a design and siting for the wall to be agreed and then permission to be granted from the church for construction in its grounds.

The plans came to fruition in 2019 with the construction and dedication.

It was always the intention of the group to hold an annual service after the wall was dedicated in 2019, but Covid has prevented them from holding one.

There are now 346 names on the wall - one was added this year after it had been left off due to a misunderstanding.

The wall remembers those security forces members killed in the Troubles through terrorism but other names are not shown simply due to costs.

Those names not currently on the wall include those Security Forces members who lost their lives due to road traffic collisions, helicopter crashes, suicide, accidental shooting, heart attacks and other causes.

There were also over 100 civilians who died as the result of terrorist activity.

A spokesman for the group said those victims had not been forgotten.

He said the wall had become a focal point with people from across the province coming to visit.

Sunday’s service also coincides with the 15th anniversary of the end of Operation Banner (the military name for the operation where the army was deployed to Northern Ireland in support of the police).

A Prayer of Dedication will also be said for the individual name added to the memorial at the beginning of the service.

Wreaths may be placed at the end of the service.

A collection will be taken during the service with proceeds to the Memorial Wall Fund.