9 out of 10 for political courage and know-how 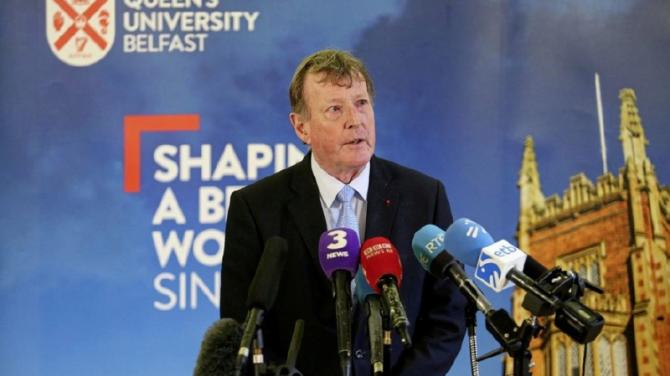 THE names John Taylor and David Trimble are woven deep into the fabric of Ulster Unionism. Fellow-UUP grandees and cheek by jowl partners in negotiating the agreement which helped to start moving Northern Ireland away from decades of sectarian slaughter to the relative peace which, 24 years on, we continue to enjoy.

From 1995 to 2001, in his capacity as Deputy Leader of the UUP, he was David Trimble's right-hand man. He was there by his side on March 25, 2000 when Rev Martin Smith’s bid to topple Trimble as leader failed.

Taylor and Trimble each respected the other’s intellect, judgement and opinions as to what was deliverable as well as desirable.

No-one knew David Trimble better than Lord Kilclooney, and in an interview with the Ulster Gazette, he paid a glowing tribute to his former political comrade-in-arms who died last Monday (July 25), aged 77.

As well as having been a genuine expression of admiration for the UUP leader whose deputy and ally he had been on the road which led to the Good Friday [Belfast] Agreement, his words conveyed a clear sense of loss which he made no attempt to hide.

Lord Kilclooney – a Bachelor of Science - told the Gazette, “David and I worked very well together. He was very much an intellectual – a former Dean of the Faculty of Law at Queen’s University – so we were able to discuss things more or less as equals.”

Describing his friend’s personality, Lord Kilclooney revealed, “He didn’t have much patience with those who, academically, weren’t up to scratch with him, so his patience sometimes wore a little thin on the telephone.

“I know this because I shared an office with him for a number of years when he was leader and I was deputy leader of the party at Westminster. I learned that his main interests, outside politics, were sailing in a barge on English Canals and opera. After he became UUP Leader I suggested to him that he should be supporting the NI football team. I brought him to Windsor Park for an international. He kept looking at his watch. He had no interest. He did not attend another football game!”

Then recalling the start of negotiations which led to the Belfast Agreement, Lord Kilclooney said, “David appointed me to be in charge of Strand 2 which was north-south co-operation. That was a subject in which I was particularly interested and with which, being from Armagh - close to the border, of course - I was familiar.

“So I knew, from experience, that David could get very frustrated with people who couldn’t keep up to speed with him. And in the office we shared, I could sometimes see the back of his neck beginning to redden with temper.

“Now, he didn’t display his temper to the person on the phone; he kept it under control. But from where I was sitting, I could see it mounting!”

He was unable to recall a single fall-out or anything of major significance on which they ever disagreed.

“We had a great exchange of views and opinions, and I think David valued knowing what I thought, which is why he wanted to hear what I had to say about things,” he ventured..

“I think that may have been because, as Suzanne Breen - now of the Belfast Telegraph - once put it, I was ‘the weather vane of the Unionist Party’. In other words, I had a very good sense of how Unionists around the country were reacting to things.”

Trimble’s faith and confidence in his Deputy’s Unionist credentials in tandem with his ability as a negotiator can be gauged by the fact that, when he was unable to attend the opening day of the talks under the chairmanship of US Senator George Mitchell, he trusted his understudy to lead.

And that trust proved to have been wholly justified, for Taylor put down a first day marker that was all-important from a Unionist perspective – namely, that Dublin would recognise the state of Northern Ireland over which, up to that point, it had continued to claim jurisdiction.

At that, the government of the Republic’s representative, David Andrews, reacted furiously. Pandemonium ensued.

Lord Kilclooney told the Gazette, “The chairman, Senator George Mitchell, had asked the participants to propose items for inclusion on the agenda.

“So I said, ‘Mr Chairman, if the Republic will not even recognise Northern Ireland, there can be no co-operation. The whole idea of these talks is understanding, respect and recognition’. And at that, the entire Ulster Unionist Party delegation, led by myself, left the room, leaving the others sitting in silence.

“We sat around drinking coffee all day until nearly 5pm when we got a message from George Mitchell to say that he was resuming the meeting. So we went back, trooped in, and Senator Mitchell announced, ‘I’m pleased to say that the Dublin Government have reconsidered the matter and decided that recognition of Northern Ireland can now be on the agenda’.

“That was pivotal. It turned the whole thing and, eventually, we had success in the form of the Belfast Agreement.”

So on day one, on his own initiative, John Taylor had succeeded in getting the Irish Government to start thinking in terms of accepting Northern Ireland’s existence as part of the UK. That was the foundation stone on which the Agreement ultimately was built, with Dublin changing its constitution to accommodate that all-important point.

“The Dublin Government and RTE all use the name ‘Northern Ireland’ now,” Lord Kilclooney pointed out. “Only Sinn Fein continue to talk about '’the North’.

“And in a referendum, the people of the Republic supported the Good Friday Agreement, thereby supporting the idea of Northern Ireland being a separate state. So the only way you can bring about a united Ireland is by a referendum in Northern Ireland.”

The political relationship between Messrs Taylor and Trimble really dates from when the latter won the Upper Bann seat at Westminster in a May 1990 by-election following the death of Harold McCusker.

“That’s when I started to get to know David,” Lord Kilcooney said, adding this important point: “Then he became involved in the Garvaghy Road/Drumcree situation in July 1996, and I think that helped him win the UUP leadership vote a couple of months later.”

Taylor had been favourite.

“I remember the night of that event in the Ulster Hall and I don’t mind admitting that at that moment I personally was relieved that I wasn’t leader.

“The next morning, Saturday, the front door bell rang and there was David Trimble, who had driven the whole way up to Armagh to say, ‘John, I want you to be my Deputy Leader in Parliament’.

“I was quite shocked, but very pleased that he was such a big man to have offered that. I accepted, and from that day onwards I worked with him very closely.”

Asked how he regarded David Trimble as a politician, his unhesitating reply was, “First class. Very thoughtful and a man who thought things through. And while he was a very firm Unionist, he wasn’t a bitter loyalist.

“In fact, I’d call him a great Unionist. Even in recent weeks, when clearly he was seriously ill, he came out very clearly against the Northern Ireland Protocol because he felt that is undermining the Belfast Agreement we worked so hard to bring about.

“We were not consulted and as a legal man who knew the law inside out, David knew that was wrong, not least because without that guarantee Ulster Unionists would never have accepted the Belfast Agreement.”

Enlarging on his now-deceased former colleague’s personality, he added, “I got on really well with him and I found him respectful of any advice or opinion he sought from me.

“Crucially, we were in total agreement on what democracy is - and there are two ways of defining it.

“One is to say ‘democracy is rule by the majority with the consent of minority’ – and we didn’t have that in Northern Ireland.

“The other way is ‘rule by both communities working together’ – and that’s what we opted for in the Belfast Agreement.”

He is convinced history will portray David Trimble as having been “a clever and very thoughtful politician, a very firm Unionist who was convinced that Northern Ireland’s interests are best served within the UK and a man who recognised the rights of those who disagreed with him. That, too, was very important.”

Asked if he felt Lord Trimble may have had any regrets politically, he replied, “The Protocol. Up until that, I think he would have been happy with the outcome of the Belfast Agreement – something that only he had the ability to get majority Unionist support for and steer it through. I don’t think anybody else could have done it, so that was a great success.

“I think it was because of his background – Garvaghy Road, Drumcree and all of that - Unionists and loyalists who looked at that realised his heart was in the right place. So they trusted him and were prepared to run with him.”

Replying to the question, ‘Was there anything with regard to NI’s constitutional position that he might have done differently or better?’, Lord Kilclooney said, “No, I don’t think so. For it to work, you had to get the consent of the nationalist minority, too, and he managed to do that – even from Sinn Fein.”

But pointing to the Dublin Government’s decision to fly the Irish tricolour at half-mast over Leinster House yesterday [Monday] when Lord Trimble’s funeral was taking place, he ventured, “I’m not sure what he would have made of that; I think he probably wouldn’t have been amused. Why? Because at the end of the day he was a very strong, pro-British person.

“Any willingness to compromise always stemmed from a determination and desire to get democracy to work in Northern Ireland. That was his political objective. So, no, I don’t think he would have been too happy at the idea of the Irish tricolour being flown on his behalf, either at half-mast or full.”

Accepting that the UUP and SDLP have each paid a very heavy price at the ballot box in the past 24 years, Lord Kilclooney admitted, “The outer fringes of both sides – Sinn Fein and the DUP – have benefitted.

“But I think things could go full circle. I say that because I believe the majority of people, whether Catholic or Protestant, are decent. They want peace and they realise that both communities must be able to support the way forward.

“One side cannot overrule the other; that just doesn’t work because it leads to conflict. And that’s what David recognised, of course.”

When asked what score out of 10 he would give his former Party leader, there was neither delay nor pause as Lord Kilclooney said. “Undoubtedly 9. You can’t give 10 out of 10 to anyone because that’s perfection and none of us are perfect.

“But certainly 9. I say that because having worked with him very closely I knew what he was up to. He consulted with me on a regular basis, so I enjoyed working with him.

“He was a good man and a very good and courageous politician who was totally committed to the Union and Unionism.

“That strength and those qualities have seen him leave a fine legacy.”