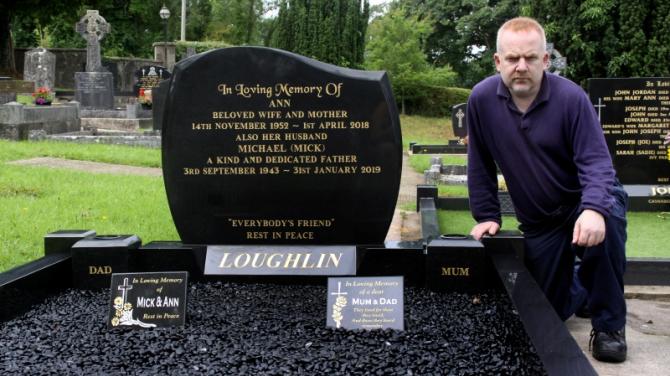 A HEARTBROKEN Armagh man has called for wardens to be introduced at graveyards following multiple thefts of flowers from his parents’ grave.

Paul Loughlin has been left devastated on numerous occasions this year after cruel thieves struck and stole floral arrangements he had placed on the grave of his parents, Ann and Mick Loughlin, at St Joseph’s graveyard in Tynan.

The popular and much respected Armagh couple died within nine months of each other – Ann on April 1, 2018 and Mick on January 31, 2019.

Following the deaths of two much loved parents, Paul and his brother Barry decided a fitting tribute would be to create a beautiful grave where family and friends could come and visit.

But, since January this year, Paul has been left sickened each time he visits the graveyard, following the theft of flowers on not one, but four occasions, the most recent of which was Sunday, July 24.

Paul told the Ulster Gazette, to his amazement he has discovered from talking to other people, the problem is happening right across the borough.

“It’s happened four times since January. From what I am hearing, it is happening all over and people have been telling me of it happening in Armagh and Middletown.

“I like to have a nice grave for people to visit and at present it is the only grave in Tynan with no flowers on it, because there is no point in replacing them if they are going to be stolen again and that makes me sad that you cannot even have flowers on your own family’s grave.

“I can’t believe it has come to this. I go out there and it is nice out in Tynan as it is peaceful and quiet and my parents were both married out in Tynan and it was their wish to be buried in Tynan.”

“Whenever I walk into the graveyard I am really anxious now because it’s a bad feeling when you discover that the flowers are gone as it just kind of sets you back a bit as to think who would do something like that.

“I was told there was a child’s grave in Armagh Cemetery and two lanterns were stolen off it, so you can’t get any lower than that.

“Surely something can be done or else appoint a council warden to oversee all the cemeteries or CCTV even.

“My parents died within nine months of each other and this whole thing, I think it interferes with the process of grief really.

“Barry and I said we will make a nice grave in tribute to them, but somebody seems to be coming along and helping themselves to our flowers.

“I don’t really understand it that anyone would do this. The first occurrence was in January this year and I had got two granite vases at either side of the headstone and that is where I put the flowers.

“I buy those flowers that don’t fade in the sunlight. The cost is £60 a time to replace them. It makes the grave look really well and sets it off. But there has been four times since and the last time was Sunday morning past.

“I’ve decided if I keep replacing them, then they keep getting stolen so my logic now is to say if there are no flowers there then they can’t take them, but that means you are not able to have the grave in tribute as you want it to be as somebody else is coming along and stealing off it.

“I just think it is a really low thing to do. Whoever is behind it I don’t know. It is hard to comprehend that it has come to this that you can’t even have flowers on a grave any more.

“Barry and I, we looked after our parents when they were ill and we miss them terribly and we came up with this idea that we would make a lovely grave in tribute to them.

“When you lose people in quick succession like that, having the graveyard to go to is a sense of comfort out there and peace, as you can sit there in a beautiful setting out in the middle of the countryside and it makes you feel settled, but now with this happening, it has the opposite effect as it makes you feel really anxious.

“Every time you put something on that grave, you are kind of saying to yourself ‘how long will this last?’.

“My parents were very popular people and a lot of people head out there from Armagh to visit that grave.

“I just had to say on Sunday morning that I have to do something different and the only thing I can think of was, for a while anyway, not have any flowers on it, but that kind of makes you sad too with no flowers on it and you say to yourself have we reached a stage where you can’t even have flowers on a grave?

“It’s a bit like kicking somebody when they are down. You lose your parents and then you lose your tributes to them too.

“It just seems to be a cruel thing to do. There is no thought and behind every theft is the person who they have stolen from.

“I sent an email to Armagh Parish and they said this is happening often, but they didn’t come up with any solutions, but I suppose awareness is a good thing, because if you do nothing, then nothing happens.

“We are set back when this happens and we can’t come to terms with it at all.

“We decided then to try and make a nice grave here which we did and we succeeded but now it is being desecrated.

“Every time I walk into that cemetery now, I am just anxious. It is bad enough losing somebody but it is even worse when they are not left alone.

“Whoever is doing this has to understand that they are interfering with grief and they are not letting the process happen.

“All they are really doing is making a bad situation worse and who would do something like that? It was heartbreaking when they died and we miss them terribly.

“A deterrent would be a warden appointed who looks after all cemeteries and goes around them all every now and again as you only need to catch them once. CCTV, some people might find that a bit intrusive, but to me it would be to have somebody who goes around the cemeteries every couple of days and oversees them.”

When asked what he would say to the people stealing flowers and artefacts from graves, Paul’s message was: “What I would say to whoever is doing this, all they are doing in reality is making people unhappy and the people who are mourning are the people who are facing grief; that is hard enough to deal with but to add to that is fundamentally wrong in every sense of the word.

“Everybody I have spoken to, they feel like myself; all we really want to do is be able to create a nice grave for the people we love and the people that we miss and I don’t think that is too much to ask.”