Work ethic pays off for RSA 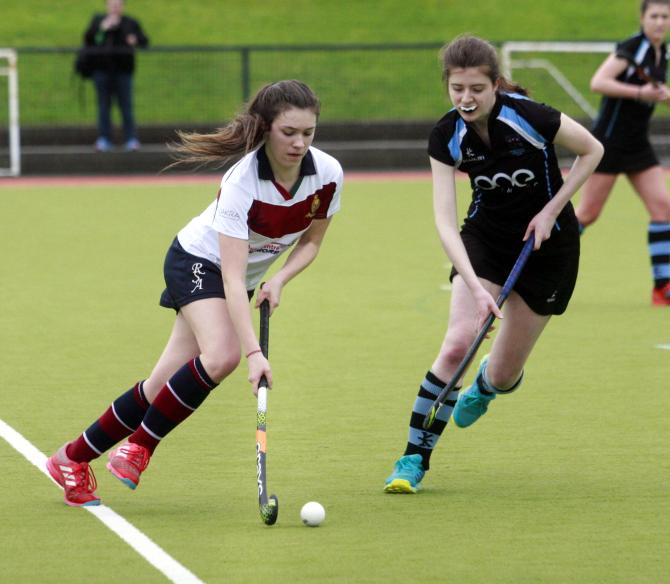 RSA's Jasmin Morrow running down the right wing in their derby clash with Portadown College at the weekend.

THE  Royal school Armagh hockey girls travelled to Edenvilla to face Portadown college in the third round of the Belfast Telegraph Ulster Senior Schools’ Cup. A repeat of last year!

Armagh started under pressure for a while as Portadown made some threatening runs into attack, but Armagh’s defence stood firmly.

Eventually the visitors found their feet and great passing from the three Armagh mid fielders, Olivia Berry, Ruth Davidson and Stacey Livingstone resulted in excellent distributions to the forwards up-field including Armagh Royal’s captain Lauren Wright creating trouble for the Portadown side.

The determination to win and make it through to the 1/4 finals of the cup led to a very close first half resulting in both teams attacking and defending each goal.

As Portadown continued to dominate the first half they were unable to break through. With tight marking and strong clearances from Jemima Stevenson and Kathrine Magowan made it extremely difficult for the Portadown side.

Portadown were eager to push back on Armagh’s defence and managed to win a short corner just before half time. With a brilliant save and clearance from Rachel Martin, Armagh managed to keep the ball away from the goal line.

Unfortunately, Poppy Smyth, who had been having a super game, had to go off with a nasty throat injury, but was ably replaced by Lucy Finney.

In the early stages of the second half Armagh clearly dominated the field. Pressure was resilient from Yasmin Morrow and Amy Dunne as they were eager to challenge the Portadown girls.

Driving towards the circle with passes between Lucy Finney and Olivia Berry resulted in a well won short corner for the Armagh side. Jemima Stevenson positioned herself well to slap the ball into the goal without any pressure she brought the score to 1-0 for RSA.

The work ethic was superb from the Armagh side to ensure they did not let any chance for Portadown slip through. They did win a couple more short corners against the Armagh, but fortunately Portdown were unable to capitalise.

A counter attack opposed for the Armagh girls from some brilliant passing down the line through Katelyn Johnston, Armagh drove into the opposing circle. With minutes left Armagh took their last chances.  Clever passes and fast movement from Sophie Anderson left Lauren Wright dangerously in the circle unmarked with a goal scoring opportunity. With no hesitation Lauren managed to fire the ball into the back of the net and not only win the game but to fire them into the next round of the school’s cup.

It was certainly a superb game with Armagh deserving their well-earned place in the Quarter Finals of the Schools Cup.
Many thanks to Portadown Ladies Hockey Club for the great pitch and facilities, the encouraging support from Armagh Royals parents and former and current students and of course the experienced umpires who made the game and experience even more enjoyable.

The girls have drawn current Ulster and Irish Cup holders Banbridge Academy in the next round, to be played next week, away again.