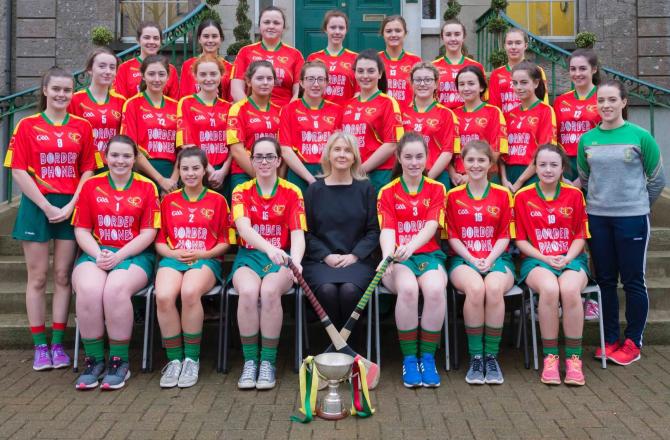 SISTERS Ciara and Leanne Donnelly will be aiming to bounce back from the disappointment of losing an All Ireland semi-final with Eglish last weekend by going one better with St Catherine’s College this Friday.

St Catherine’s have virtually home advantage against a team coming a very long way when they meet Limerick’s St John the Baptist Community School, from the small town of Hospital between Tipperary and Charleville, at Armagh’s Abbey Park (2pm). The local side will want to make home comforts count though this is unfamiliar territory for St Catherine’s, whose Ulster Schools Cup success before Christmas when they overcame St Killian’s College of Garron Tower in the final, was their first at this level for almost three decades.

St Catherine’s top-scorer and captain Leanne Donnelly lifted the Fr Davies Cup on her 18th birthday for a team coached by big sister Ciara, with whom she lines out as a fellow forward for Eglish, Armagh and Ulster. The deadly Donnelly duo had fired Eglish to victory in a pulsating Ulster Intermediate decider against Down’s Clonduff last October and were hoping to secure a return to Croke Park next month after their headquarters heartache a year ago. Back then Eglish lost out by an agonising single point to Carlow’s Myshall in the All Ireland Intermediate final but this time the dream ended with a two-point defeat to Kildare’s Johnstownbridge in the semis.

It finished 2-5 to 0-9 at Ashbourne where Armagh captain Ciara Donnelly led the way with seven points and Leanne also got on the scoresheet but their heroic efforts weren’t quite enough to get the Tyrone team over the line. It speaks volumes for the high expectations created by Eglish’s success of recent years that their defeat surprised people but thankfully the Donnelly duo, who were joined by middle sister Aisling in the club side, have an alternative route to an All Ireland final.

Although primarily a Maths teacher, the elder Donnelly doubles up as an excellent camogie coach for St Catherine’s with the brilliant Leanne an equally obvious choice as senior team captain. Their county team-mate, Cullyhanna’s Caella Casey, another rising star who featured in last year’s Ulster squad for the interpros, is also a big figure for St Catherine’s whose experience could prove very valuable this Friday. Leanne Donnelly, her Eglish clubmate Catherine Muldoon and exciting Tullysaran prospect Katie Convie are all current Ulster Schools All Stars while several team members were part of Gazette columnist Ciara Hayes’ Armagh Under 16s squad which won the All Ireland C title last August.

St Catherine’s have also been making waves in ladies football this season so their dual players, including Crossmaglen duo Aislinn McMahon and Faye Fitzpatrick, have a busy schedule but the success makes the hard work worthwhile. The Ulster representatives will need big games from Casey and Convie this week and a great team effort for the full hour but a lot of responsibility rests on Leanne Donnelly’s shoulders as skipper, free-taker and top player. Although Leanne’s sister is the coach, she has such standing that making her captain was a no-brainer and didnt run any risk of attracting accusations of nepotism.

“I’ve captained teams a fair bit by this stage and don’t mind doing it. I’m very vocal on the field in trying to get everyone pushing hard. I think it helps really knowing what Ciara wants and of course several of us have played with her for club or county,” reflects Leanne. “I might be biased but I really rate her as a coach. Every training she takes is great, with different drills and so forth so we’re always learning. She’s very respected for her achievements as a player but brings much more than that reputation to the job.

“Ciara just wants us to do well for ourselves and she really laid it down to the team at half-time against St Killian’s when the final looked like slipping away from us but that was what we needed and it had the desired effect.

“Not everyone has their big sister as their teacher, school coach, clubmate and county colleague I suppose but whatever hats we’re wearing doesn’t really change how we are around each other. Home is different again to camogie environments.

“We’ve a lot of shared experiences in camogie at this stage, not just myself and Ciara, but within the group which should hopefully stand to us in the new territory of an All Ireland semi-final.

“A few years ago, most of us were part of a team which came from 11 down at half-time to win a game so the Ulster final deficit didn’t daunt us. My head did drop briefly when they got the goal early in the second half but the scores came and then the penalty.

“The crowd really lifted us too so it’s great to think we should have great support for this semi as it’s here in town. But that won’t win us the game if everything else isn’t right so our full focus is on making sure we produce our top performance when it matters.

“We won’t know as much about the opposition as we would with fellow Ulster schools but that’s an exciting challenge and I think there’s sufficient character in this team to rise to the occasion rather than be daunted by it.

“It’s a special privilege to be preparing for an All Ireland semi with your school and those of us in our final year have really appreciated every second of our run because each time you go out on the pitch it could be your last ever game for St Catherine’s.

“I’m very proud of this school, privileged to be captain and really grateful for the support we’ve got. There was a brilliant response from staff and fellow pupils alike when we went in after winning Ulster.“You could say we make sacrifices for camogie and at times it’s incredibly busy but we absolutely love the game and, especially when success comes, every effort feels totally worthwhile.

“I feel fortunate to have had the privilege of winning with my friends for school and club but after Eglish losing our All Ireland semi-final last week, we wouldn’t want to come out the wrong side in another one.”

This St Catherine’s success story is a real family affair for the Donnellys with Leanne leading the team on the pitch, Ciara coaching it and the latter’s boyfriend Niall Geoghegan’s company, Border Phones, sponsoring the kit!

The Eglish journey ultimately ended in disappointment but the exceptional contributions Ciara and Leanne made to their Ulster Intermediate title triumph meant they were the only Armagh women from either code honoured at last month’s Gaelic Life Ulster Club All Star awards dinner.